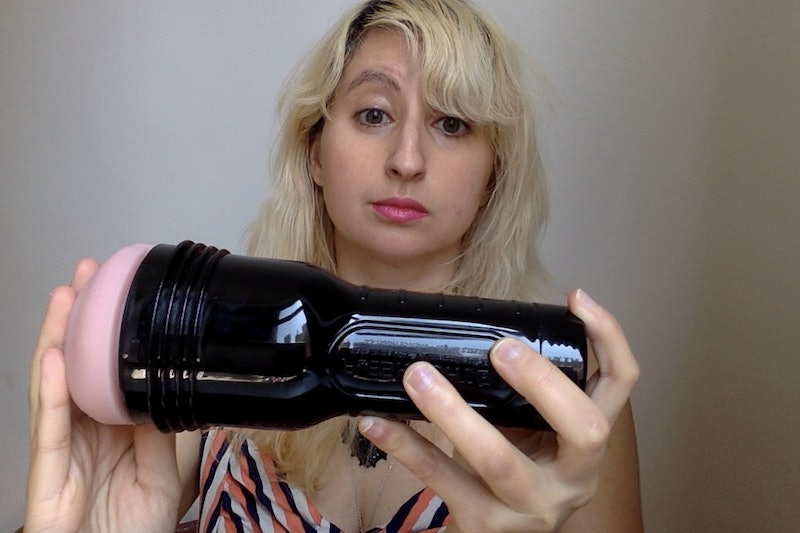 It may seem that male sex toys like the Fleshlight are new on the scene, but much like every other apparatus we use to stimulate our party parts, they've existed for a very long time — there are allusions to sculpted marble sex dolls in ancient Greek literature, and seventeenth century sailors were known to improvise sex dolls out of rags. More recently, the first commercial sex doll was marketed in the U.S. in 1968 — but today, even to many sexually progressive folks, they hold a taboo that even female sex toys no longer possess.

I'll admit to being anxious about trying them out with my boyfriend— even though I am a sex writer who spends half of my professional life brainstorming new slang terms for erections ("ham wand"? "microwaved flesh burrito"?) and the other half informing my boyfriend that we're going to be spending the weekend testing out some new sex toy for couples, I felt a little threatened by the idea of male sex toys when I first really thought about them. Shouldn't I (and endless access to online pornography) be enough for him? Why should my boyfriend need a hole in a can to have an orgasm? Could I possibly be replaced in his affections by a butthole in a can? I mean, I'm very moody, and I talk over the important parts of all TV shows. Crazier things have happened, right?

In an effort to assuage my anxiety, I asked Adam Lewis, founder of high-end male sex toy company Hot Octopuss, why, in an age when we can buy vibrators at the convenience store, male sex toys haven't gone mainstream. Lewis told Bustle that "Until recently there has been a stigma attached to men using sex toys...the perception has been that if a man uses a sex toy he must be a little perverted, desperate or unable to find a partner."

Though the public's ideas about women's sex toys were radically expanded in the late '90s and early '00s with the popularity of attractive vibrators like the Rabbit and other sleek sex toys, male sex toys are often designed to look like cartoonish genitals — a phenomenon that Lewis chalks up to "a lack of creativity in the industry and an unfounded perception that male toys need to as closely as possible replicate reality." Lewis thinks that the embarrassing or corny designs of sex toys have put both men and women off male sex toys — "blow-up dolls, replica vaginas and so on, who would want to be associated with these?"

I decided to see if four of the most popular male sex toys worked for my boyfriend, both solo and for coupled sex. Here are the toys, rated from least to most effective.

Up close and in action, the Succulent Blossom did look pretty similar to one of those water-wiggle toys — it's a thin silicone-like sleeve, with openings at both ends, and a slight stickiness to all of its surfaces. It fits over the penis like a little plastic tube top, where it can be used to help out with handjobs and the like.

His Review: "The Blossom was like jerking off with a beer koozie. It's impossible to use without lube; with lube it keeps slipping off for a couple minutes and then gets dry and sticky and uncomfortable."

My Review: My boyfriend liked the Succulent Blossom until he did not. When we initially started using it, he seemed to dig it; but as time went on, the surface seemed to dry out, turning his enjoyment into demands that I get it off his penis rightthissecondow. I may have enjoyed it more than him, because it was easy for me to use — it wasn't very bulky and thus wasn't very hard to manipulate — but when someone says that a sex toy is giving them eraser burns on their donger, you have to put it in the "fail" column.

The Fleshlight may have not invented the male sex toy, but they've certainly popularized it — more than four million of the brand's toys have sold since the company set up shop in 1995. The basic Fleshlight is a black tube, which is filled with a tube made of a very soft plastic called SuperSkin. The tube is topped with a molding of whatever you'd like to stick your Carlos Danger into — a vulva, a mouth, a butt, and for the truly fanciful/troubled among you, a zombie vag. You clean the Fleshlight by removing the "skin" part from the tube, and flipping it inside-out so that it looks like something from a David Cronenberg movie.

Also, I should admit that before we ever used it, I took the vulva model out around the house, moved its labia around so they looked like they were lips, and pretended it was yelling "Feed me, Seymour!", which I'm sure was more of threat to my boyfriend's continuing sexual interest in me than any toy ever could be.

His Review: "The Fleshlights were nice. It's a firm grip from a soft surface, kind of like using your hand, but better. The anus was tighter, the vagina was gentler. Both very satisfying and fun to use. Depending on the degree of arousal, it does seem easier to go soft in these than the other toys (since there's no friction or much at all in the way of contact if you aren't fully hard)."

My Review: These things are HEAVY. I tried to use both of them to give a handjob, and while he seemed to enjoy it, my arms got exhausted. They're a little hard to really make use of during foreplay — your angles are kind of limited by the fact that your biceps will probably feel the burn from using it within a few minutes. It also didn't make me feel that engaged with the sexual act at hand — I couldn't see my boyfriend's penis at all while we used it, as it was kind of lost in the tube — but I did enjoy having the option of doing something besides just rubbing or sucking on his junk.

His Review: "Really fun and felt exciting, especially with lube. I could see it being the best option for couples. Some of the start-stop patterns were annoying and counterproductive, but I'd suspect that's a matter of personal taste."

This wildly popular Japanese sex toy company will be familiar to readers of Aziz Ansari's Modern Romance — they manufactured the disposable sex toy that he anticlimatically climaxes into during his trip to Tokyo. The Tenga Flip is from a different, more high-end line of the company's products. It functions on fairly similar principle to the Fleshlight — it's a textured hole you fill with lube, then stick your boner in — but instead of being a static tube, the Flip splits in half, with two sides that fly up, a la the DeLorean from Back To The Future. It also has buttons the outside, which allow the user to apply pressure to specific points within the tube.

The principle behind Tenga's design process is that their toys aren't supposed to look like human sex parts, but rather like a fancy pepper grinder or a very upscale bong. I kept mine next to my SodaStream on my kitchen counter for a week, just to see if anyone noticed (if they did, they were too polite to comment on the potential health code violations I was engaging in).

His Review: "The Tenga is the best of the bunch — you have the most control over different sensitive spots, the bumps and ridges feel fantastic, and it seems to require less lube (and less frequent lube application) than the Fleshlight. It does feel kind of cold when you go in, but that can be nice. Very easy to clean, too!"

Overall, I learned two very important things from this experiment: 1. male sex toys can be fun to use with a partner, just like female-oriented sex toys, and 2. your boyfriend is not going to leave you for a butthole in a can. I swear. Probably. They can spice things up just like women's sex toys, take some of the work out of the more arduous parts of sex (especially if you have a partner who takes a long time to orgasm), and hey, if they end up not being for you, you can still use them as a desk organizer or something.