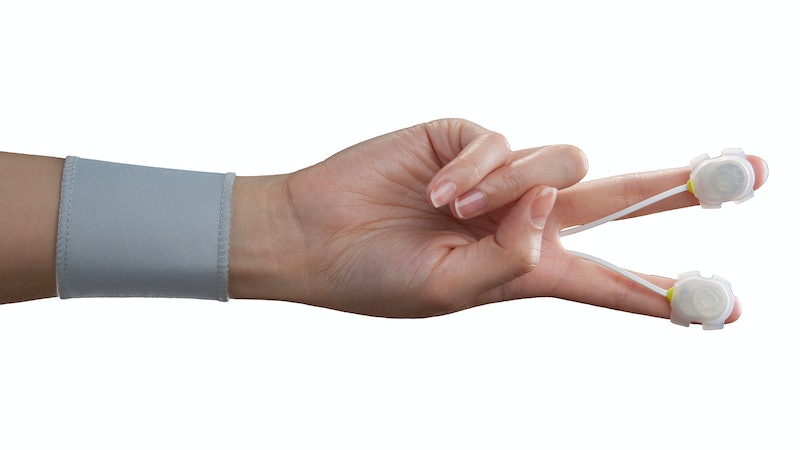 Instead of worrying about what your partner might think about using a sex toy in bed, we should probably be more concerned about them becoming even more obsessed to having sex with us. (Seriously. It will probably blow their mind a little, in my experience.)

More importantly, sex toys are a great way to get YOU off. Most people with vulvas can't come from penetrative sex alone, and using a toy can really open up even more positions to orgasm in — since using your hand, while also a great option, is only possible from so many angles and can get tiring.

Because I have the best job ever, I decided to test seven luxury couples sex toys over the past year. Some were so good they died on me from overuse, and some simply didn't do it for me at all. Of course, this is just the way my body responded — everyone is different. That said, I hope my findings will help you make an informed investment in your multi-orgasmic future. Because while these are all non-refundable and a bit of a splurge, finding the right sex toy is truly priceless.

Did It Get In The Way Of Penetrative Sex? Yup. (Though only because it kept falling off.)

Who I'd Recommend It To: Someone who has a larger labia, maybe?

God, I really, really, really wanted this to work for me. It kills me to say this toy didn't do it for me at all — especially because the story behind its development is so cool. This is a crowdfunded sex toy, designed by women. The innovative design — meant to hook onto your labia for hands-free vibrating sex — sounded genius and exciting to me.

In the end, I tried using Eva with my hand on my clit, and that was ... OK. The vibration is a bit buzzy, not as intense or deep a sensation as I like (more like a stronger Pocket Rocket).

My Main Complaint: While I'm sure this toy could be a godsend for someone else, I simply couldn't get it to stay on me at all, which is the way it's meant to be used.

Did It Get In The Way Of Penetrative Sex? Hardly.

Who I'd Recommend It To: Someone with a longer/bigger vulva than me.

I bought the original model back in my early vibrating days, and had the same problem I had with the newest version this time: it's just too big for me. Probably because a lot of women had the same complaint, the redesigned We-Vibe 4 Plus is smaller than the original model — but it was still too long for me. The tip of the vibe, designed to hit your clit, rested well above my bikini line, making it pretty pointless.

Interestingly, the vibrating piece that stays hooked inside felt better for my guy than it did for me. Because I felt it moving in and out, and I couldn't feel his shaft in the same way, it made me a little dry and uncomfortable — but he got both the sensation of being in an even smaller space, and having strong vibrations on his shaft. While I was impressed that he liked it so much, I felt distinctly frustrated with how the We-Vibe was missing all my magic spots, and ended up taking it out after a few minutes every time I tried to use it.

My Main Complaint: My suggestion to We-Vibe? Please, for the love of all that is orgasmic, make these in different sizes, or find a way to make them adjustable. Not all bodies are the same size, and this shouldn't be the only model of this great design.

Did It Get In The Way Of Penetrative Sex? Sure did — but it's not meant to be used that way.

Who I'd Recommend It To: Someone who wants to get their partner to understand the appeal of sex toys, or has a partner who has trouble getting hard.

The self-proclaimed "first guybrator" by Hot Octopus cracked both of us up. Everything about it — from the packaging to the black instructional manual that basically said "Dude, figure it out, you're a man" — was kind of hilarious. I mean, just look at this ad compared to the female-marketed toys.

There are a few ways to use the Pulse II. One is for a person with a penis to lube up their penis and put their shaft into it and basically jack off; which seemed to fairly amuse my guy, though he said he preferred his hand over the toy. The way to use it as a couple, though, is basically to dry hump while your partner's shaft is inside it, and you're rubbing up onto the hard, vibrating side of it.

Did It Get In The Way Of Penetrative Sex? Not at all, though it would of course be hard to use in missionary.

Who I'd Recommend It To: Someone who likes mild, buzzing vibrations.

This JimmyJane toy, designed to strap onto your fingers, will make you feel like a cyborg. "We're living in the future!" I proclaimed, laughing to myself as I strapped my bot-fingers on. While the idea of this toy is great, I found the vibrations — a buzzing watch battery-powered sensation, much like a magic bullet — not satisfying for me.

My Main Complaint: While I loved the fact that this didn't get in the way at all, it also didn't provide any real additional sensation for him, or really get me off. After a few tries with this, I opted to go back to using my own hand, every time.

Did It Get In The Way Of Penetrative Sex? Not really — except that you have to be in a position where you can hold it, and it is a little bulbous when you're on your stomach.

Who I'd Recommend It To: Someone who wants to try something handheld and potentially adventurous.

Finally, we're getting into some stuff my finicky body liked. The Lyla 2 can be used in bed, held against your clit, or inserted. Because it has a remote-control option, you can also take it out on the town for a night of secret sexiness. While I'm sorry to say I haven't been to a club loud enough to try that at yet, the idea of being able to stick this in your panties and have your partner control it while you go dancing does sound fun.

Used as a handheld vibe against your clit during penetrative sex, this toy gets the job done. It has multiple settings, and packs a punch at the highest one, for those who like a stronger vibration.

My Only Complaint: This toy is egg shaped (I guess so it works for insertion as well?). I would have loved for it to have a flat side or an easier grip, both so that it was easier to hold when I was being penetrated on my stomach, and so that it would seem more appealing/discreet for a night out in my panties.

Did It Get In The Way Of Penetrative Sex? Not at all — except that you have to be in a position where you can hold it or keep it smushed against you.

Who I'd Recommend It To: Anyone who wants to try something handheld and eco-friendly.

This toy is awesome. The shape is intuitive, easy to hold, and provides a steady vibration. Sometimes, when the tip is directed at your clit it can feel a bit on the pointy side, but basically, this vibe is a winning way to make coming during penetration much, much easier. Better yet? It's endorsed by none other than Alicia Silverstone herself, and was rated the most eco-friendly sex toy for it's phalate-free material and eco-friendly packaging.

My Only Complaint: It died on me in less than a year. That's apparently not entirely uncommon for all of these rechargeable toys, whose batteries just tend to give out after a certain amount of use (not unlike your laptop, I guess, only apparently, much more quickly). If you spring for this, I highly recommend filling out the warranty.

Did It Get In The Way Of Penetrative Sex? Not at all — except that you also have to be in a position where you can hold it or smush it against you.

Who I'd Recommend It To: Everyone with a vulva.

We have our winner. Funny that the We-Vibe brand disappointed me so much when it came to their "No. 1 couple's toy," but knocked it out of the park so hard on this one. Its shape, which is easy and intuitive to hold, is on point. There are eight different settings for every kind of intensity and sensation, and at full charge, I would be shocked if this doesn't get you off.

Roughly half the size of a small hand, like The Leaf Life, this sort of rests over your mons pubis while you hold it, giving you a nice feeling like it's "hooking" onto your clit. The tip is just strong, soft, and wide enough; providing a deep, dependable, and not-buzzy vibration that it isn't too loud.

My Only Complaint: It also died on me in less than a year! Jesus, I didn't use it that much ... (or did I?!). Once again, I highly recommend filling out the warranty, in case you end up loving it as much as I did.

Happy vibing, and remember: treating yourself to a high-end sex toy is one investment that really will keep on giving [you orgasms]. You're worth it.

More like this
7 Women Share Their Best Orgasm Stories
By Lexi Inks
Are Virgo & Capricorn Compatible In A Relationship?
By Kristine Fellizar
The Best Time To Date After A Breakup, According To Experts
By Bustle Editors
How Do I Deal With Both ED & Premature Ejaculation?
By Sophia Benoit
Get Even More From Bustle — Sign Up For The Newsletter

This article was originally published on April 23, 2015