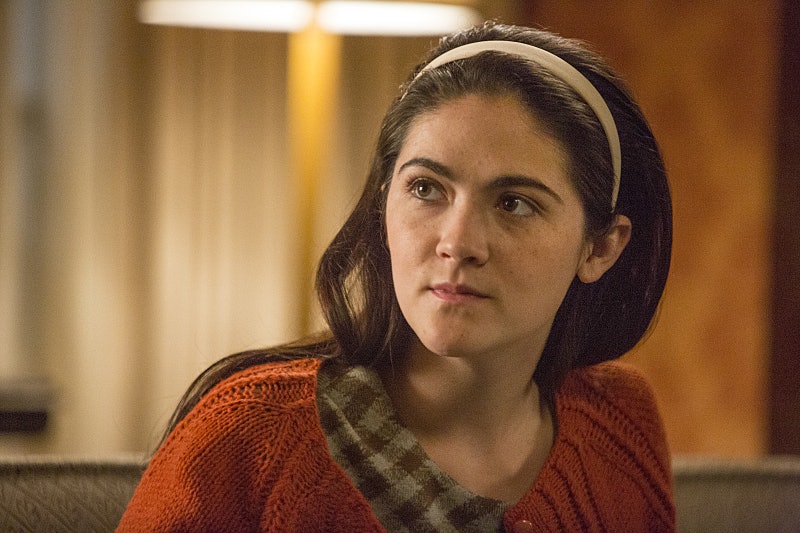 Showtime's critically-acclaimed period drama Masters Of Sex has always had a tricky relationship with the truth. While protagonists William Masters and Virginia Johnson are indeed pulled from the annals of history — as is their 1966 study, Human Sexual Response — many of the particulars within each episode are wholly fabricated. The Season 3 premiere, "Parliament Of Owls," leapt the show five years into the future from the Season 2 finale, which means all of the Masters and Johnson children are now played by young adult actors. Hunger Games actress Isabelle Fuhrman made the biggest impression as Virginia's teenage daughter Tessa, so you're probably wondering: Is Tessa based on a real person?

Like most things on MoS, that question doesn't have an easy answer. Yes, Virginia Johnson did have two children. But, no, Tessa is not strictly speaking based on either of them. In fact, if you watched all the way to the end of the episode, Showtime wanted to make sure you were aware of this fact. The cliffhanger reveal of Gini's pregnancy was immediately followed by a new (and jarring) disclaimer: "This program is about the important achievements of Masters and Johnson. The children Tessa, Henry, Johnny and Jenny are entirely fictitious."

So, while Showtime's Tessa is a rebellious teenager who gets black-out drunk after raiding the liquor cabinet and tries to seduce her mother's lover, she bears no (intentional) resemblance to the real-life Gini's daughter. Even all the children's names have been changed: Virginia Johnson's actual children are not Henry and Tessa, they're Scott and Lisa. Not much is public about Lisa's life today, although the obituaries for Gini's death in 2013 stated that her daughter — now Lisa Young — was still living in St. Louis.

The most illuminating information on Lisa's life comes from the archives of People magazine. In a 1974 article on the home life of the Masters-Johnson family, it was revealed that Lisa (who was 19 at the time), was "a model seeking to enter the hot new female career of racing jockey." She and her stepsister, Masters' daughter Sally, were apparently very close: "Sally and Lisa have moved into the caretaker's house on the Masters's six-and-a-half-acre suburban estate." (Although on MoS, Gini's daughter is clearly older than Bill's, Sally is, in reality, four years older than Lisa.)

While Tessa may be entirely fictional, not all of the show's children may not be. Those viewers are particularly good at counting may have noticed that, while the show's new disclaimer mentioned four children, the show contains five. Sometime during the five-year time-jump, Bill and Libby had another baby: Howie Masters. The People article reveals that Sally had a brother one year younger than herself named — you guessed it — Howie Masters.

Why would they change the names of all of Bill's and Gini's children except for one? Could the writers actually be planning on adapting part of the real life of the Masters' son? If so, it's a complicated story. In 2012, a 60-year-old Howie Masters was arrested in Michigan for allegedly exposing himself to two women. He and his wife declined to comment on the situation when asked at the time by The Associated Press, but the arrest came after having previously been cited for public masturbation in Central Park, which he plead guilty to. Is Masters Of Sex about to show us the rocky upbringing that led to the real Howie's obviously troubled life? We'll have to stay tuned to find out.