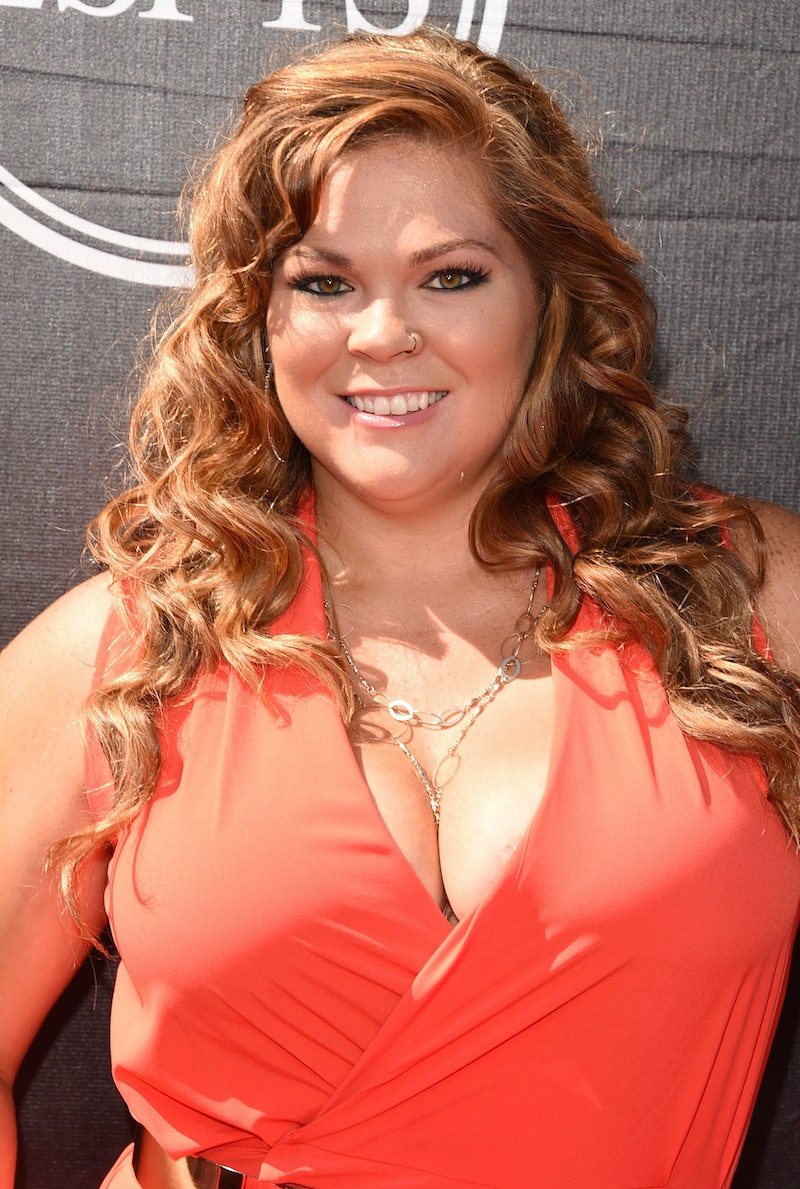 If you want to know what kind of person U.S. track and field athlete Amanda Bingson is, ask her about what happened after she was in the Olympics. "I didn't have any contracts, I didn't have anything yet," she says in a phone interview with Bustle. "So as soon as I got off the plane from London, after competing against the best Americans and the best people in the world, I was cooking orange chicken at Panda Express. I needed to pay my bills."

Despite the fact that she's a world renowned Olympian, an athlete who broke the American female hammer throw record in 2013, and made headlines by posing nude on the cover of ESPN Magazine's 2015 Body Issue, she doesn't seem like she would ever bullshit you. In fact, when she had to reschedule our interview for the next day, she expressed her regrets by saying, "I'm sorry, I don't want to be a fucking asshole. Oh! Sorry! I mean freaking asshole."

It's this kind of candor that made me warm to Bingson immediately. It also made me hopeful about what I called her to discuss: The image of the female athlete.

For me, growing up in a larger body was never an asset. I was 5'10" tall by the time I was 12 years old, but I didn't (and still don't) have an athletic bone in my body. While people assumed that I would play softball or basketball because of my size, I always ended perplexing them when the only thing I could really do was compose a killer sentence while organizing my patent leather shoes and stealing my mom's lipstick. I knew girls like Amanda Bingson when I was young, and I was always in awe of the fact that they not only seemed proud of their large bodies, but that they actually knew how to use them.

"When most people looked at me — even people who never talked to me — they'd be like, 'Oh so you must do sports.' I'm like, yeah, I do," Bingson says. "But it doesn't mean that you have to only do sports."

I was surprised to hear her say that, because I'd spent my entire life assuming that female athletes were pretty much uninterested in anything else but their craft. That may have been true for a while, but only out of necessity. According to Bingson, there used to be pressure on female athletes to behave and look a certain way, so they could be taken seriously in a world that was dominated by men. Now, women are able to express themselves and their identities more, both on and off the field. For Bingson, it's a sign of progress.

"I think that female athletes now are definitely starting to show their femininity a lot more on the field," she muses. "Women in their uniforms, sweating profusely, is clearly not all we’re capable of doing. I think that it’s amazing how women are finally starting to recognize that."

(Amanda Bingson thinks many female athletes are starting to be unafraid to show their feminine side.)

Still, the transition can be a little bumpy. After all, sexism is still alive and well, even in places where women are kicking ass and taking names. Bingson recalled a story about a particularly gorgeous girl in her event that a coach didn't take seriously.

"My coach and I were having a conversation about how I was getting nervous about competing with this girl. She was gorgeous, absolutely gorgeous. She wasn't trying or meaning to be, she was just naturally gorgeous. So, sitting there I was like, 'Oh man, I’m so nervous, she’s gonna beat me and kick my ass.' My coach was like, "Oh don’t worry, she’s too pretty to throw far.' I was like...'Wait... what? Are you kidding me?'"

His comment stuck with Bingson, and she's kept "too pretty to throw far" with her, propelling her to kill it every time she enters the field — even if she's wearing a face full of makeup.

"I want people to say that about me, and then I want to come out and kick ass. That’s what girls are doing now, not only are they playing good but they’re looking good while they’re doing it, and that’s amazing."

While femininity isn't necessarily something that's valued by all female athletes, it's encouraging that women who do value it are finally starting to feel comfortable expressing themselves, even if their athletic bodies don't fit the conventional standards of beauty.

Which brings me to Bingson's amazing photograph on the cover of ESPN Magazine's 2015 Body Issue, an image that instantly became a sensation due to the fact that A: Bingson is nude and B: She's not thin. Suddenly, she became a body positive icon, with people repeatedly asking, "How does a woman of your size feel so confident?" However, there's something that most people don't realize.

"I'm the tiniest woman in my event," she laughs. "I'm 5'6", and the average height for a woman in my sport is at least 5'9". In society, people talk about me because I have rolls, but in my world, I'm the little one. Everyone's throwing food in my face, trying to make me gain weight."

It's almost like a parallel universe. In everyday life, women are constantly trying to shrink themselves, and the words "big" and "fat" are often synonymous with "failing." But Bingson's world is totally different. In her universe, big is simply synonymous with awesome.

"When I actually made the Olympic team in 2012, that was the first time where I was like damn, these girls are big, these girls are powerful, they are doing it. You see all these different female body types, you see the weightlifters, you see the shooters, the equestrians, the basketball players, the swimmers, you see every kind of body type you can possibly imagine in this one place where we are all the best athletes in the world, period, hands down. That was the first time I was like damn, this is awesome. These women are awesome."

And when it came to shooting the cover of the Body Issue, Bingson wanted to make sure that the awesomeness of it all was properly conveyed. While Natalie Coughlin and Jamie Anderson, the other two female athletes featured in the series are in somewhat sexy, playful poses, Bingson is the only woman who is practicing her craft. She says this was completely intentional.

"When I told them that I was willing to do it, I made it perfectly clear that I only wanted to do action shots, I didn’t want to do it just like me, standing naked, looking at you with a hammer," she says. "I wanted to make sure that we got that because of what I was trying to convey, I didn’t want it to be a, 'OK, I’m just going to stand here with my implement and hide something.' I wanted to show my body for what it is and show my body for what it does, when it’s active. It's not supposed to be sexy."

And yet it is — but not within the typical lines of what we imagine from a "sexy" photograph. In fact, Bingson's image on the cover of the Body Issue perfectly illustrates the shifting image of the female athlete: Instead of being a powerful image because it's sexy, it's a sexy image because it's powerful.

Still, Bingson remains humble about it all, almost as if she's unaware of the statement her iconic cover has made.

"I'm not going to frame the magazine or anything," she notes. "I’ll definitely keep a couple copies of the Body Issue and show the kids and grandkids if and/or when I ever have them."

"Just to let them know they're dealing with a badass."