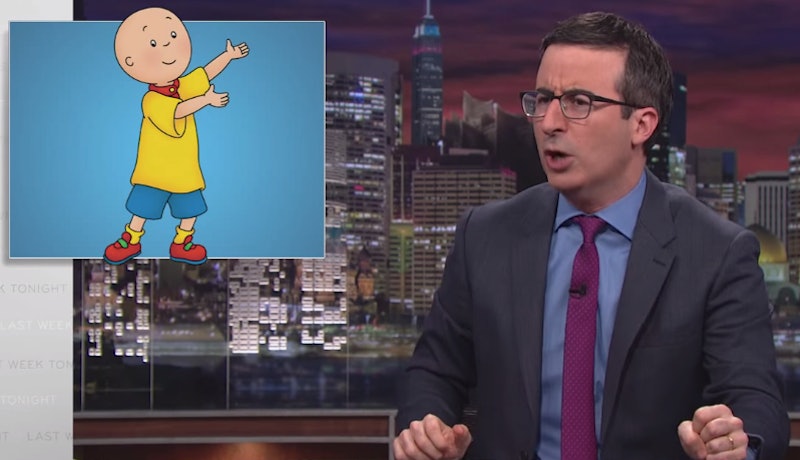 John Oliver isn't just a wizard with words; he's a master of using his comedy to enact change. And clearly that's resonated with Hollywood as the Emmys gifted the British host and his HBO show Last Week Tonight With John Oliver with three nominations. It's a big boon for its first season, and yes, this may be David Letterman's last year, but dammit, there's something to be said about a show that has a real-life impact on current events. The best John Oliver moments show exactly why he deserves to win an Emmy.

Oliver has transformed the late night game not just by combining politics with entertainment. His winning recipe involves picking a tough topic and breaking it down for viewers. When you watch his segments, you don't just laugh; you get angry, because the injustices and hypocrisies he points out are stunningly true. Those kinds of subtle calls to activism set Oliver apart from his peers because who else can really say that their words have gotten the average American viewer to get off the couch and do something. From police brutality and income inequality to FIFA corruption, Oliver spared no one from (in the words of Chris Christie) telling it like it is.

He made net neutrality bearable. He sat down with Edward Snowden. He called out FIFA — twice. And he's just getting started.

Oliver unpackaged the boring and confusing topic of net neutrality in a digestible way so viewers could understand what was really at stake with those confusing "fast lanes." If net neutrality ended, telecom companies would be able to charge users a premium for faster Internet connections. According to The Washington Post, the FCC's commenting system was overwhelmed with more than 45,000 new comments that came within a day of Oliver's net neutrality segment. The end result? The FCC voted to preserve an open Internet.

On mobilizing Internet trolls to protest ending net neutrality: "We need you to get out there and, for once in your life, focus your indiscriminate rage in a useful direction. Seize your moment, my lovely trolls, turn on caps lock, and fly my pretties! Fly! Fly!"

Oliver's take on Ferguson had a few fun moments when discussing racial tensions across the world — who knew there might be an emperor vs. gentoo penguins rivalry? — but it took a far serious tone to discuss police militarization across the country.

On police militarization: "The police are not soldiers. So why in this photo from Ferguson are they wearing fucking camo? They are northwest of St. Louis, not northwest of the Amazon. ... If you are a cop in the United States, you should dress for the job you have, not the job you want."

The difference between the "haves" and the "have nots" in this country is growing everyday, and Oliver points out the problem in the American Dream narrative: Many Americans think the economic system favors the wealthy yet continue to believe that if they work hard enough, they can get ahead.

On just how unfair the country's wealth game is: "America now has a system where wealth is essentially dispersed as a lottery of birth. And maybe the reason we seem to accept that is that even though we know the odds are stacked against us, we all think we're going to win the lottery."

Yes, student debt has reached $1 trillion, surpassing credit card debt in the country. Oliver reminds us that education is a business, especially for for-profits like Corinthian Colleges. By the way, since the time Oliver's segment was shot, Corinthian officially shut down and left 16,000 students hanging.

On student debt: "Essentially, student debt is like HPV. If you go to college, you're almost certainly going to get it. And if you do, it will follow you for the rest of your life."

Two years since Edward Snowden blew the lid on the NSA's secret surveillance, Americans still don't know or understand the significance of his actions. Cue a flight to Russia, and holy shit, there is Snowden himself in a sit-down interview with Oliver. Just another late-night show this ain't.

On Snowden blowing the lid on the NSA: "Look, you can think that Snowden did the wrong thing or did it in the wrong way, but the fact is we have this information now and we no longer get the luxury of pleading ignorance. It’s like you can’t go to SeaWorld and pretend that Shamu is happy anymore when we now know at least half the water in her tank is whale tears."

Are pageants really relevant today? Oliver didn't think so last September and went on a rant about how ridiculous it is to have, in 2014, a "line of women in swimsuits awaiting judgment." Oliver's team also did some serious journalism by digging into Miss America Organization's finances and debunking the myth of just how much scholarship money they award.

On Miss America being the world's largest provider of scholarships for women: "The biggest scholarship program exclusively for women in America requires you to be unmarried, with a mint condition uterus, and also rewards working knowledge of buttock-adhesive technology."

The organization so corrupt, it got two rants from Oliver. Before the U.S. Department of Justice unloaded a stunning indictment for nine former and current FIFA officials in May, Oliver blasted the corruption underlying the World Cup's governing body. Part two was glorious.

On America's role in checking FIFA's corruption: "It took the country that cares the least about football to bring down the people who have been ruining it. That’s like finding out that Kesha arrested a group of bankers involved in commodities fraud."