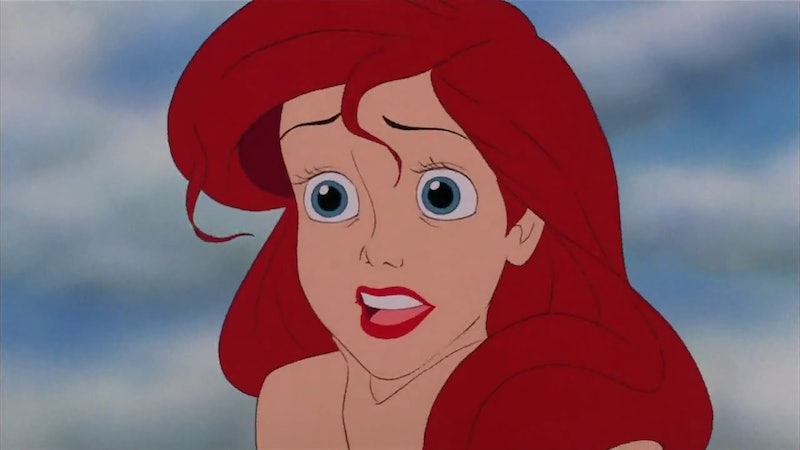 Now, as a person I'm deeply in the camp of "Hipster? That doesn't even mean anything anymore." Very often it feels like a term fuckboys use when they can't commodify you into a singular type. People often feel overwhelmed when you break out from a clique and turn into, you know, a human being with varied interests. But, as a satirist, I'm pretty sure the stereotype revolves around mason jars, Grizzly Adams beards, and drinking red wine while watching 500 Days of Summer for the 500th time (which is literally what I did last night).

Whatever. Because you're dying to find out, and because I'm a walking Lana Del Rey music video, here's every Disney princess ranked by least to most hipster.

No. Loud no. Cinderella's whole thing is about adhering to the status quo, to the point where she was basically a slave for about a decade. Just... no.

I mean, the part where she dances with a freaking owl seems in line with the general aesthetic, and the fact that she lives with three fairy aunts? So quirky. But, at the end of the day, Aurora seems more fit to be a streamlined lifestyle blogger in the style of Gwyneth Paltrow than a Tumblr celebrity defined by countless macbook pro selfies.

Oh, girl, I don't think so. Snow White is the antithesis of everything modern, and there's no way your average hipster girl would cook and clean for seven men. Unless she was on tour with like, Mumford and Brother-Cousins or whatever it is. +2 for that rustic vintage vibe, though, and the fact that everything Cinderella and Aurora did, she did before it was cool.

All right, so where does Tiana fit into the spectrum? Simple. Tiana is your favorite barista at the wine bar/microbrewery/coffee house, who's actually struggling to pay for her apartment on her own terms. She's always super sweet to you when you place your order, but you sense a slightly resentful gaze when you call up your parents for more money, an iPhone 6 in one hand and a $13 drink in the other.

Anna is the girl who discovered Tumblr last week.

Rapunzel is the girl who discovered Tumblr two weeks ago, and already uploaded like 600 pastel drawings from her classes at UArts.

Mulan is such a unique individual, not only for how she challenges gender roles, but for being the only Disney princess that is decidedly not a Disney princess. Like, she's not. She marries a General. It's whatever that we choose to adopt her into the Disney princess group, I'm not going to contest that, but let's call it what it is: she isn't a princess.

Nobody is more organic than this chick, let me tell you. Also, that outfit is so Coachella (and, you know, an artifact of her culture).

"I don't want to get married mom, I just want to focus on my archery!" - the entire plot of Brave, also something with a bear.

The immaculate crop top game, Pinterest-worthy hair, and rebellious streak all help to put Jasmine in our top five. But what really sells it to me is the boyfriend who looks homeless... because he IS homeless. I've had two of these. It's an essential part.

Elsa is so anti-Disney princess (and, incidentally, is a queen anyway) that of course she ranks more hipster than not. She wants nothing to do with society, albeit because she's afraid of plunging her kingdom into nuclear winter. And that braid!

What can I say? Belle, who is my perennial favorite, has a whole titular song about how different she is from everyone in town. A beautiful girl who (gasp!) reads? That is every suburban hipster, spending their Saturdays flipping through Kate Chopin's The Awakening in the Starbucks Barnes and Noble (i.e. that is me). The fact that Beast is exponentially hairy also helps.

Honestly? There's no way Ariel would've won this weird competition if it wasn't for that meme, but, when you piece things together, it makes sense: whereas Belle represents everything I indulge in as a "hipster," Ariel is every negative facet of the stereotype. Ariel comes from a place of privilege but yeans for an alternative lifestyle. Ariel collects a bunch of useless items so her room basically looks like an antique store. Ariel plays off being independent and free but really just wants an Instagram-candy boyfriend. Ariel rambles about all of the items in her room, but would probably think Robert Smith was lead singer of The Smiths, it's that real.

Call her Helvetica. Ariel is the most hipster Disney princess.

More like this
Josh Peck Shows Love To Jennette McCurdy After Her Shocking 'iCarly' Revelations
By Radhika Menon
At 14, D'Arcy Carden Was Sneaking Out To Parties & Crying Over Kurt Cobain
By Ivana Rihter
Jennifer Aniston Just Gave Courteney Cox The Biggest Endorsement
By Darshita Goyal
Jennette McCurdy’s First Kiss On 'iCarly' Didn’t Go As Planned
By Bustle Editors
Get Even More From Bustle — Sign Up For The Newsletter