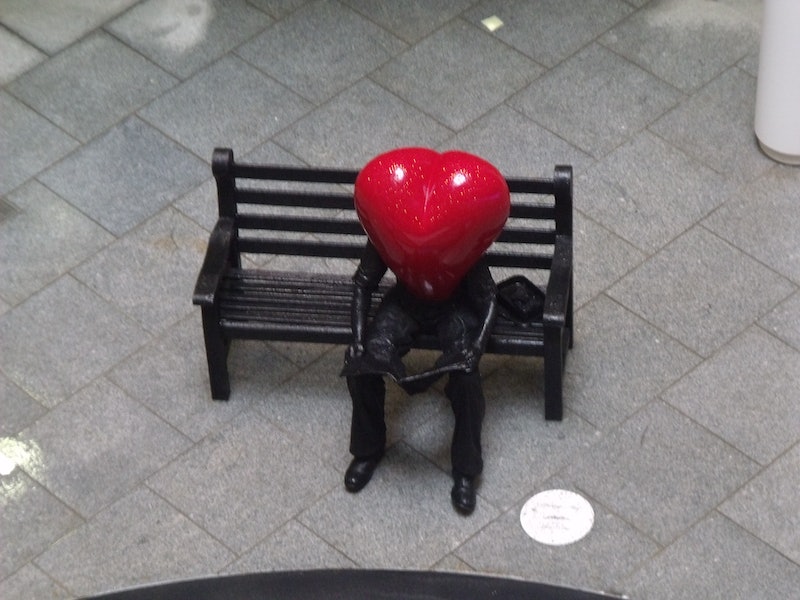 There are two types of people in this world. I know, I know, you've heard that one before. But actually, there is a way of slicing the human population that can predict how people feel about a lot of things: Figuring out whether someone is a "head person" or a "heart person." As one recent study revealed, the differences between those who "think with their heads" and those who "think with their hearts" run deep.

But, you may wonder, didn't we squash the belief that feelings were located in the heart, like, centuries ago? Yup — this classification isn't about what organ people actually think with, but rather, what they think they think with. Psychologists identify head people and heart people by asking them where that nebulous thing they call a self is located.

The most recent study on head people and heart people, conducted by researchers at Rice University's Jesse H. Jones Graduate School of Business and Columbia Business School, found that most people say their self is in the brain — a hopeful indication that many of us have passed elementary school science. But those who said their hearts housed their "selves" exhibited some interesting deviations from the head people. (Anyone else feel like they're reading some apocalyptic horror novel?). Here are some of those key differences.

1. Head and heart people identify with their respective organs' symbolism.

2. Head people are better at school.

Another part of the same study showed that head people were better at answering general knowledge questions and had higher grade point averages — presumably because they're more rational, though I'd venture that maybe they just paid enough attention in school to know people think with their brains.

Insofar as the heart symbolizes emotions, these people are correct to identify with their hearts. In a study designed to see whether people would give more weight to their own emotions or the greater good, heart people were more likely to choose someone else killing their son plus one more person over killing their son themselves.

They described more instances of feeling "distressed" and "nervous" in response to everyday stressors. And the most recent study found that...

Heart people are more likely to support stricter abortion laws based on the fetus's heartbeat. This fun little personality test just got heavy.

6. Heart and head people have different ideas about what constitutes death.

Not surprisingly, heart people are more likely to consider someone dead when the heart stops beating, while brain people give more weight to brain death.

7. Your status as a head or heart person determines where your money goes.

The qualities of heart and head people, however, are not set in stone. One interesting finding of the earlier study was that having people point to their heads and hearts in the process of carrying out unrelated actions — without even knowing they were pointing — led people to behave more like head people and heart people, respectively. The mind is a mysterious thing... or should I say the heart?