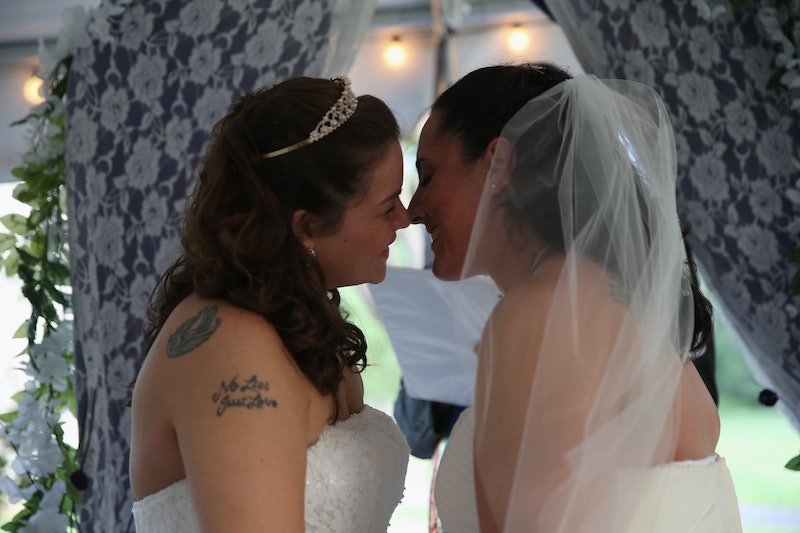 Someday, science will hopefully be able to tell us the exact time, down to the day, that is best for us to get married. As much as I welcome that glorious future, we obviously aren't there just yet — but science is slowly narrowing down the time frame: We now know that people who get married after the age of 32 are more likely to get divorced, for instance. That's useful information, sure, but it still isn't enough to work with for picking an actual date. I mean, I don't have a fiancé, but I'd like to get that wedding chapel booked as soon as possible, you know?

In this study, University of Utah sociologist Nicholas Wolfinger looked at data from the National Survey of Family Growth between 2006 and 2010, hoping to spot patterns around marriage and divorce. What he found when it came to people getting married in their thirties was surprising: In your teens and twenties, waiting to tie the knot is beneficial, with people who get married at 25 being 50 percent less likely to divorce; furthermore, your chances drop by about 11 percent for every year you wait after that — until you hit your early thirties.

According to Wolfinger's analysis, around age 32, the odds of divorce stop dropping and instead level off — and then start going back up again, increasing by about five percent for each additional year you wait. By your mid-thirties, if you're getting married, your odds of divorce are the same as they were when you were in your mid-twenties. And if you're getting hitched in your mid-forties, your chances of getting unhitched are roughly the same that they were in your late teens.

So what's going on here? Well, Wolfinger says that in order to really know, we will have to do more research, but he does have a hypothesis — namely that people who wait so long to get married are more likely to be ill-suited for marriage in the first place, thereby making their marriage more likely to fail. Which makes about as much sense as anything, I guess.

So what does all this mean? Well, some people might tell you that it doesn't mean much of anything — that statistics are not prescriptions for behavior and that doing what is best for you is probably going to work out better for you personally than trying to conform to what works best on average. They might also point out that there are a lot of studies about seemingly irrelevant wedding details that are apparently statistically meaningful for your risk of divorce, like the cost of your wedding dress or the number of guests at your wedding. Those people might also point out that researchers compile this sort of data in order to understand trends and gain a fuller picture of society, not to make recommendations for individual people.

But as for me, I don't by any of that. Instead, like I said at the beginning, I'm eagerly awaiting the day when science can pick my wedding date out for me by calculating the age, down to the day, that I should be when I get married in order to maximize my chances of never getting divorced. Because deciding things for yourself is overrated. Outsourcing that stuff to science is way easier.