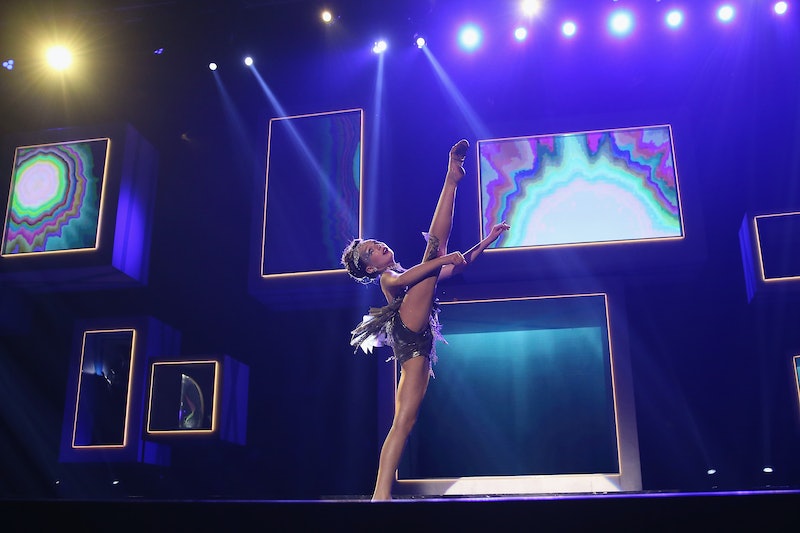 Those office posters with inspirational quotes and beautiful landscapes have been spoofed throughout the years, but there is a new breed of inspirational posters that should exist and don't deserve to be mocked — GIFs of Maddie Ziegler dancing. The child star who has gained fame through Dance Moms and Sia's trilogy of music videos is often responsible for causing a lot of awe with her ability. But, rather than get down on yourself for not having the talent that Maddie has, channel that energy into letting Dance Moms' very own Maddie Ziegler inspire you with her greatness.

While Maddie doesn't get the opportunity to say much on the show (unlike Abby Lee Miller and the moms), her dancing is a form of expression, and based on the grace and elegance she conveys in her movements, it's easy to assume that Maddie is wise beyond her years. Though Maddie clearly has inherent dance talent, she also works hard at her craft.

So, let Maddie inspire you with her movement with these 12 GIFs — and maybe one day they can grace your cubicle wall. (It is 2015 after all, movable posters have got to be a thing soon, right?)

...especially if you have the talent of Maddie Ziegler.

2. "Reach For The Stars, Even If You're Falling"

Even as Maddie plummets to the ground, she's still reaching for greatness.

Time to channel your inner Elsa from Frozen and say goodbye to the things in your life no longer benefitting you.

4. "There Is True Beauty In The World"

It's nice to be reminded of the elegance that exists.

6. "You Are Stronger Than You Think"

7. "Our Greatest Glory Consists Not In Never Falling, But In Rising Every Time We Fall"

This rising quote has been attributed to a number of people, but Maddie demonstrates the falling part perfectly in Sia's "Chandelier" music video.

Is it possible that I believe Maddie more than Kate Winslet from Titanic in this moment?

It's not often you get to see a carefree Maddie looking like she's just enjoying the simplicity of dancing for herself.

This Maddie inspirational poster is all about the mood lighting, but she still shines like a beacon of light.

Speaking of light, Maddie is like the golden ray of sunshine that Annie was singing all about.

Just accept you probably don't look as good as Maddie, but it's still fun to try.