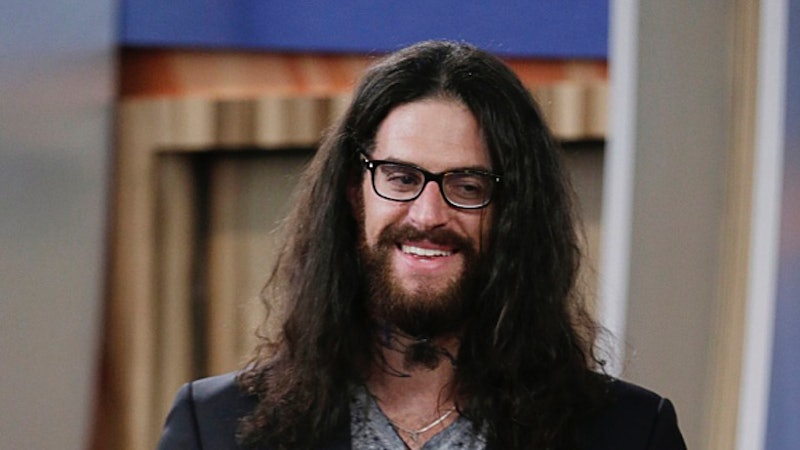 For weeks, the only thing I could talk about in my daily life was which twin Austin was into in the Big Brother house. Really, you’ve never seen a freak out until you’ve seen me trying to uncover a showmance in the Big Brother house. And then—like a gift from the gods—on Thursday night’s episode, Austin talked openly about developing feelings for Liz. And, just like that, all of the energy that had been poured into figuring out whether Austin had a crush on Liz or Julia was converted immediately into a super confusing new puzzle, because, wait a minute: Doesn’t Austin have a girlfriend?

The answer, in short, is "yes." Austin does have a girlfriend. And he’s not hiding it. He has talked about her openly in his bio, during his audition tape, and in numerous interviews before entering the Big Brother house. But something he never mentioned, until he heard through the grapevine that Liz wouldn’t be into anything more than flirtation with him because he has a girlfriend, is that he and his girlfriend are in an open relationship. Whether it’s always been an open relationship or whether they decided that would be the best thing for them for when Austin was in the house, it means that Austin is not cheating on his girlfriend and that I need to take a deep, calming breath about it.

Because it makes total sense why Austin and his girlfriend would agree to be in an open relationship while he was in the house. It’s a long time to be completely out of touch with each other (the most Austin could get is a letter from his girlfriend if he wins Head of Household). Not to mention, a number of houseguests have admitted to outright dropping their boos to better play the game. So I give Austin mad credit for not completely ditching his lady, but making arrangements so that he could play the game as effectively as possible without anyone getting hurt. This way he can start a showmance if he has to, or flirt like his life depended on it if the game comes down to that.

Plus, as much as monogamy might be my thing, there are a lot of people who believe strongly that the whole one person for the rest of your life thing is completely unrealistic. For a romantic and emotional guy like Austin, he might be the kind of person who knows that loving one woman for the rest of his life would not only be impossible, but downright miserable.

So let’s all take a deep, calming breath, shall we? Inhale. Close your eyes. Count the five. And let go of the crazy cheating concerns. Austin’s heart and romantic game are still totally pure.

And you know who else has a pure heart? All the ladies over at Bustle's Big Brother podcast:

More like this
Seann Walsh’s Girlfriend Has Played A Major Role In His Jungle Journey
By El Hunt
'Love Island's Gemma & Luca Have Very Different Ideas About Their Break Up
By Frances Stewart and Sophie McEvoy
Why Wasn't Teddi At The 'Bachelor In Paradise' Reunion?
By Brad Witter
England's Ben White Proposed To His Girlfriend In The Sweetest Way
By Sam Ramsden
Get Even More From Bustle — Sign Up For The Newsletter