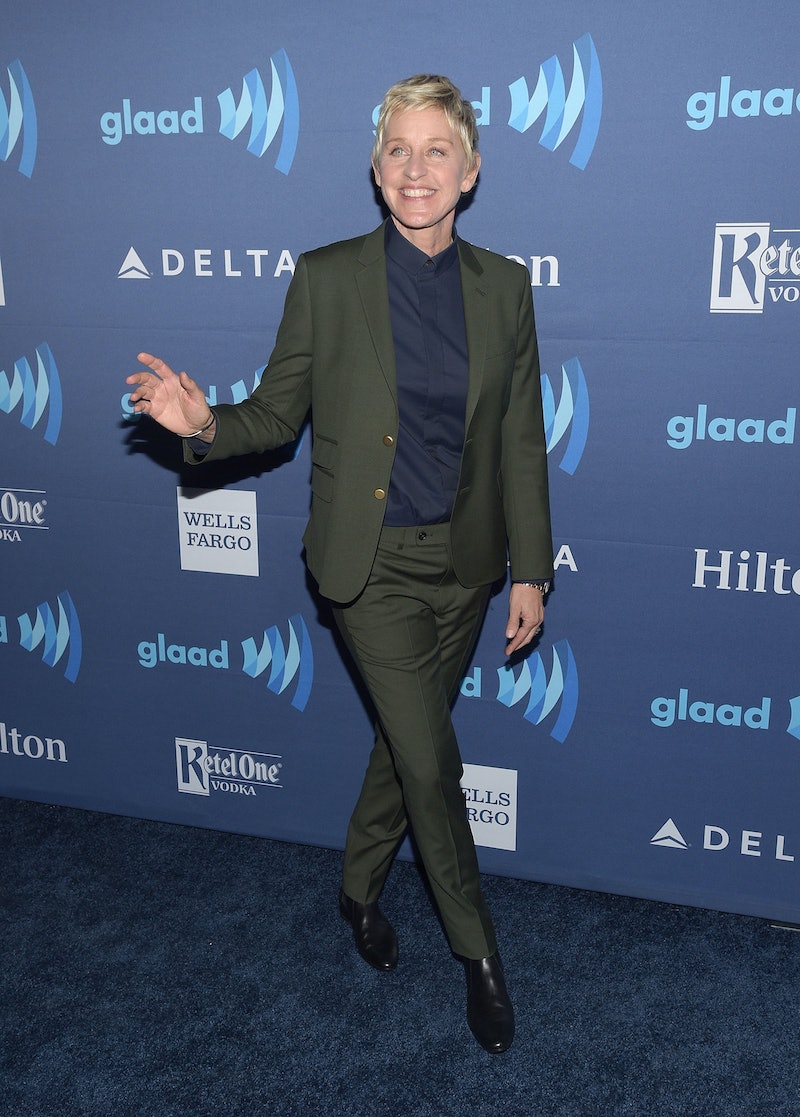 My days of back-to-school shopping have sadly come to a close, but if I were a kid living the elementary life, I would hold off on my initial purchases until further notice. Vogue UK spoke with Ellen DeGeneres on her GapKids x ED collection Monday, sharing with us some exclusive insight on the clothing line, which is due to hit stores on August 17. The collection has a central focus on encouraging girls to embrace their individuality, and to ban together in order to lift one another up rather than tearing each other down.

If there is anyone who understands just how important it is to accept oneself for exactly the person you are, it is Ellen DeGeneres. After coming out to the public on the Oprah Winfrey show in 1997 and experiencing heavy backlash that resulted from her sexuality, the comedian was off our radar for a few years, but made an epic comeback once her talk show, now 12 years running, took off. You've probably heard of her once or twice, right? Yeah, I thought so.

DeGeneres has done about a million things since coming out, including being involved in It Gets Better Project, which aims to stress to LGBT youth that life does get better and to live it as they are. She's also, you know, hosted the Oscars — NBD. All in all, Ellen Degeneres is extremely successful and talented, is dedicated to important causes, and is generally just awesome, so her designing a line of children's clothing sounds pretty wonderful.

Given that DeGeneres debuted her lifestyle line, which includes clothing, this July, it was only a matter of time before DeGeneres continued to expand her fashion projects. I mean, she rocks a suit better than any man or woman I've ever met.

It is only fitting that Ellen DeGeneres would go on to encourage our girls to accept who they are, believe in their talents, and pursue their passions.

Check out five things we learned about Ellen DeGeneres's Gap collection from her interview with Vogue UK and see how DeGeneres is encouraging girls, and boys, everywhere to embrace their individuality through her clothing line.

We've got some pro skate boarders, a young entrepreneur most likely to make more money than I will in the next five years, a pro drummer who would put many to shame, and a 9-year-old engineer of prosthetic hands. Little girls doing big things.

Throughout the campaign, DeGeneres wants her miraculous models to take some selfies and caption them with words of wisdom which, given their resumes, they seem to have a lot of.

"Imagine how many girls around the world could bond through selfies in really cute outfits," DeGeneres said. "They could break the Internet."

"By the way, we have some really amazing boys clothes in the collection," DeGeneres said, "We believe in equal opportunity cuteness."

5. Each Graphic Print Is Symbolic

According to Vogue, "The collection — featuring graphic prints including lightning bolts, to represent power, and a speech bubble, to allow girls to find words of encouragement."

Leave it to Ellen to create a kids clothing line that represents more than just style.