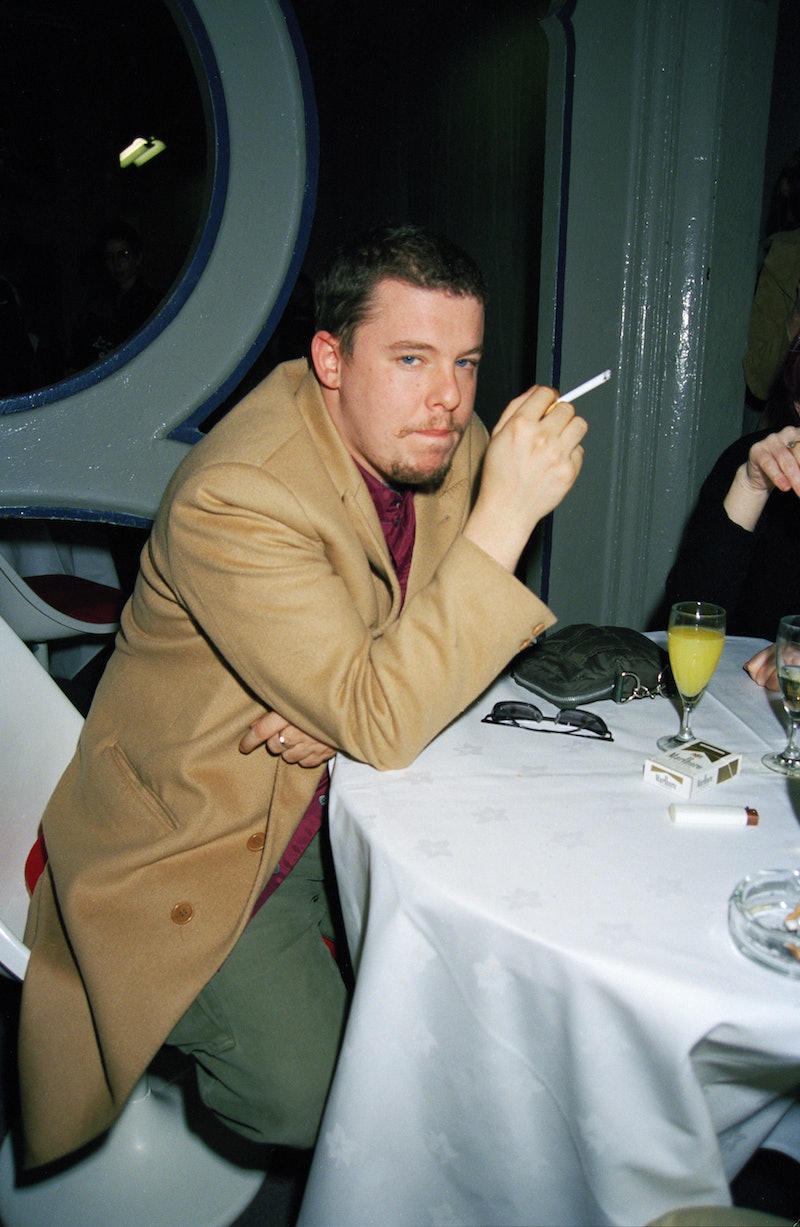 Thanks to Google Alerts, I just became aware of some very exciting (yet slightly dated) news from across the pond. It seems that the U.K.'s currency will be getting something of a makeover, and there is a possibility that the late Alexander McQueen will be on the 20 pound note. Of course, politically speaking, this isn't very much keeping up with the social progress of the day, and others in the running like Beatrix Potter should totally get it instead. America and Britain have been fighting to have a woman on our currency as of late, so a white cisgender man is obviously not an ideal choice.

So why is this exciting news to me? The feminist in me may not have been leaping for joy, but the fangirl side of me certainly was. You see, the moment I discovered McQueen in high school was the moment I fell in love with fashion.

My life pre-McQueen was pretty bleak. Fashion was never something I was particularly interested in. I couldn't and refused to thrive in a land of hyper-femininity and cookie-cutter clothing, where body image issues were both created and encouraged. I wasn't aware of other realms of fashion and beauty options that I could relate to — spaces that were androgynous, unconventional, and empowering. And that's exactly what the world of McQueen was and remains.

I first discovered him thanks to Mother Monster herself. At around the time Lady Gaga's second album was being released, I was at the height of my "goo goo for Gaga" stage and an active member of the Tumblr community. I was especially obsessed with the way she dressed.

So when this amazing jewel-encrusted full bodysuit (paired with the greatest shoes I've ever seen in my life) appeared in her new "Bad Romance" video, I needed to know what this amazing creation was from. Tumblr blew up after the video's release, mostly about the totally inhumane looking shoes. A few seconds of scrolling down my dashboard gave me my answer, though: Alexander McQueen was the designer.

After that moment, all I was concerned with was finding more photos of McQueen's clothes online to drool over. Practically everything he designed was a statement piece of the most unconventional sort. Creating things like unicorn horn head accessories and baby crocodile shoulder pads, McQueen used the most interesting materials for his pieces including feathers, shells, antlers, and human hair. (The environment-loving side of me took a vacation whenever I admired his work.)

What arguably made his work so good was his attitude towards the feminine population. McQueen revered women, and had spoken a lot about how he aimed to empower the women he dressed. "I want people to be afraid of the women I dress," the late English designer once said. Considering what I had seen in fashion previous to discovering McQueen, I was impressed that he seemed to cater directly to my interests.

And so began my long affair with fashion, as I sought out any silhouette that would make everyone I knew fear me. Like absolutely shake in their boots when they saw me for one reason or another. Shock value was definitely a priority always, and getting dressed in the morning became way more fun. I learned that there was great power in fashion, and that I could be a feminine person but still feel unbelievably strong.

Unfortunately, just as we were really starting to get to know one another, the love of my life died. A year after my obsession began, McQueen took his own life by hanging himself at his home in London. For the first time ever, I mourned a public figure so intensely it was as if I'd lost a member of my own family.

I had to wait another year for the greatest gift McQueen could give me, but it was well worth it. The following year, The Met held an exhibition entirely dedicated to a lifetime of his work. Called "Savage Beauty," I was hellbent on going to see it. I would do anything I had to in order to go and drool over all of his work IRL, even if that meant a long journey from upstate New York to the city, or a three hour long wait to even get a glimpse of the collection. And it was worth every second.

The exhibition was breathtaking. Experiencing the power and energy of his clothes in person is completely indescribable. In addition to old favorites like Gaga's "Bad Romance" outfit and the baby crocodile shoulder pads, I saw new favorites like his royalty-inspired silky cloaks and BDSM-inspired leather outfits.

One collection that stood out the most to me was "Highland Rape." Its plaid and torn-up aesthetic was meant to represent the political and cultural ways that England "raped" Scotland in historical tensions between the nations. Although Scotland is less controlled by its English big brother now, there are years of bitterness and history between Scotland and England that McQueen incapsulated in his collection. As a person of Scottish descent, I didn't think McQueen could've spoken to who I am any more than he already had until I saw this collection.

Walking away from the exhibit, I harbored an even greater appreciation for and knowledge of the late and great McQueen. Seeing all of his unconventional and strange pieces in virtually the same room together really drove the point home for me that he truly saw beauty in the grotesque and the strange, as I do. He forever changed the face of fashion, and taught me hugely valuable lessons.

The kind of woman that he constructed with his clothing — the woman he imagined dressing — was someone like me. In turn, I realized that there was plenty of space in the fashion and beauty worlds for someone as androgynous and unconventional as I am. I understood that fashion can be tailor-made to help further evoke these qualities. But McQueen also taught me that you can "queer" fashion. Besides the fact that he was a gay man himself, the weirdness and outsider-ness expressed in his clothing confirmed that showcasing my own queer identity and outwardly wearing outlandish things was not only perfectly OK, but sexy and empowering as well.

Most importantly, though, he taught me to carve out my own niche in the world. McQueen is truly a one of a kind designer whose work is so distinct you can spot it from a mile away. He made me realize that I do in fact love fashion, but I have to do it my way. And in the enormous and varied world of fashion and identities, I had the power to do it my own way. There's nothing wrong with loving something that you love, even if people think it's weird or consider it ugly. Because, as McQueen knew, there is so much beauty in the weird and grotesque.

He may have been a white man, but his design preferences and mission to make the women he dressed feared by all helped me get closer to my feminist and queer identity. He was a weird and, at times, grotesque man, but one of the most beautiful people I've ever come across.