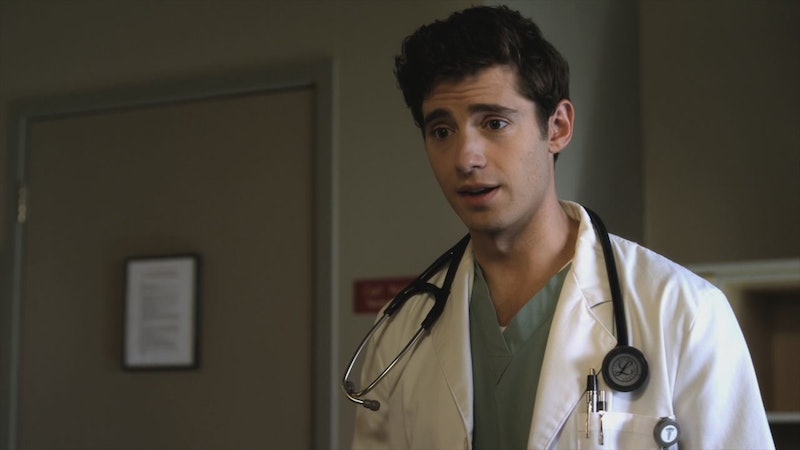 Is it just me, or is Pretty Little Liars just getting more and more confusing as we steamroll our way towards the much-heralded summer finale? I mean, sure, Mona just confirmed fans' suspicions that Charles is still alive (and revealed that he and Bethany both escaped Radley the night Ali disappeared), but do we really believe her? What Machiavellian machinations is she up to now? What's Sara Harvey's deal? Lesli Stone's deal? Suffice it to say, there's a lot of madness floating around out there — but there's one theory out there that shines through it all like a beacon of hope: And that's the Wren is Charles DiLaurentis on Pretty Little Liars theory.

It's long been one of the most compelling A theories out there, and it's recently been enjoying some time in the spotlight as the cherry on top of the Drunkgate Reddit post — but whether you choose to believe in the so-called spoilers or not (which both I. Marlene King and ABC Family have said are false), there's some pretty solid evidence stacking up against Wren out there. Everything from his romantic pursuit of multiple underage girls, to his doctorly know-how makes him the perfect A candidate, as described in the video below.

So with all that in mind, here are some of the best theories and arguments from the interwebs that prove Wren Kingston is actually Charles DiLaurentis.

1. He Has A Long History Of Sketchiness

Tumblr user piercetheglambert rewatched all of the Wren episodes, and summarized his suspicious activities in each, from the fact that Wren, like A, has a preference for Vodka sodas, to the fact that he can't spell "diagnosis" correctly. It's definitely worth a read, if you don't have time for a full-fledged PLL marathon.

2. We've Never Seen Him With The DiLaurentis Family

Wren's preoccupation with the Hastings family is legendary, but what about the DiLaurentis family? As Tumblr's gingerswift points out, we've never seen them so much as coexist before — could it be because he knows they might recognize him? For more on the Charles and the always suspicious DiLaurentis clan, check out Bustle's Pretty Little Liars podcast below.

3. His Radley Job Doesn't Disprove Anything

Many fans have been quick to point out the fact that Wren can't be Charles, because he worked at Radley and he would have been recognized. Redditor lauren_d88, however, reminds us that the citizens of Rosewood don't exactly play by the rules. As she puts it, "this is the same town that allowed Toby 'it's Andrew babe' Cavanaugh to become a policeman overnight." Nothing's a given, and Wren could definitely still be Charles, mysterious medical degree be damned.

Redditor NothinButFett breaks down the etymological link between "Wren" and "Charles" quite handily. Apparently, some countries celebrate Wren Day, and in Spain, this holiday is known as "Caceria del rey Charlo," which roughly translates to "The Chase of King Charles." Spooky, right? Wait, but it gets even weirder — apparently, in 16th century Spain, wrens were actually referred to as "King Charlo" birds.

Coincidence? Or something more...

Charles' parentage has long been a source of discussion in the Pretty Little Liars circles, and one of the most common theories is that Charles and Bethany are somehow related to the DiLaurentis family. Means of relation vary, but Redditor reachingforthestarss' well-thought out theory explains how Wren, Bethany, and Andrew (and Ali and Jason, of course) could all be half-siblings/cousins.

We all know how Pretty Little Liars loves its anagrams — and Witthoeft pointed out on Reddit that "answer" (as in #SummerofAnswers, a term that's been making quite the rounds this season) is an anagram of "Wren's A." Now, it's definitely a stretch (if it turns out to be true, it's definitely one of PLL's weaker anagrams), but we can't discount anything when it comes to Charles theorizing!

This is another stretch of the imagination, but according to Tumblr user stoptalkinbulls**t, this bizarre poem IMK recently posted on IG also happens to be an anagram for, "I saw mom throw aunt Marion from rooftop so Wren is Charlie."

8. He Could Have Stolen The A Game From Mona

King has long maintained that Big A stole the game from Mona while she was in Radley. Now, who do we know who was in regular, sketchy contact with Ms. Vanderwaal during her stay at Rosewood's finest mental institution? Why, Dr. Wren Kingston, of course. As Tumblr user prettylittlecandylie points out, Janel Parrish has maintained that Mona "sold her soul" to A to get out of Radley — and that little tidbit, combined with her stilted, enigmatic exchanges with Wren, definitely makes him look like a strong Charles candidate. Well that, and everything else Wren has done that proves he is a much larger part of the Pretty Little Liars mystery that we first realized.