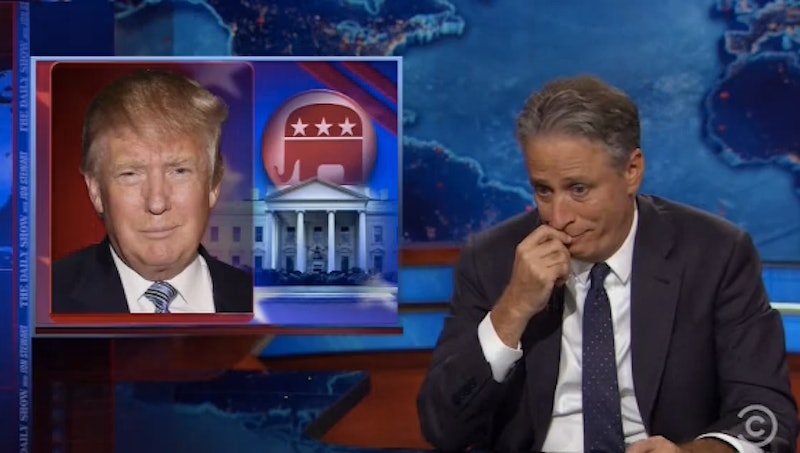 He's back! Jon Stewart on Monday returned to The Daily Show after a two-week break, during which some pretty notable events happened. Sure, there was the Iran deal and the next chapter of Greece's sad financial saga. But the big name in headlines belonged to none other than Donald Trump, or, as Stewart says, "the patron saint of topical comedians who are just running out the clock." There's less than a month left in his 16-year run at the helm of the Comedy Central show, but Stewart blasted Donald Trump for his John McCain comments in such a glorious fashion, you'd think the late-night host was in the middle of sweeps.

Trump's comments in question came this past weekend when he told an Iowa audience the Arizona senator wasn't a war hero. "He's a war hero because he was captured," Trump said. "I like people that weren't captured, OK, I hate to tell you." His words are so blatantly disrespectful to McCain's experience as a Vietnam War POW that it's almost as bad as if Trump said:

As of late Monday, Trump has yet to officially apologize to McCain, instead choosing to defend himself by giving the "tit for tat" excuse. To Trump, he should be able to dish it to people, whether it's calling them "losers" or making fun of their personal appearances, since people do that to him all the time. Like when it comes to his hair. We've all taken some shots at Trump's signature hair, and yes, at our core principles, it's never OK to make fun of the way someone looks. But Stewart gives his reason as to why we might make an exception when it comes to Trump.

Now I agree making fun of someone's physical appearance is a cheap blow. But that hair? That is comedy entrapment. People are not attacking your hair. They are defending themselves from something that appears like it's about to attack them.

What's crazy about it all is the Trump train(wreck) first began when his ignorant self made sweeping declarations about Mexicans immigrants during his candidacy announcement last month. The GOP pool was largely quiet during that whole fiasco, but with Trump's recent "projectile vomit of sickishness" on war veterans and POWs, Republicans have finally sidled up next to each other to oppose him (which also helps them out since the business mogul is now officially leading them in polls).

Yes, at long last, does the man who accused the vast majority of Mexican immigrants of being drug-addicted rapists have no sense of decency.

Stewart has just three weeks left to make the most of Trump's historically ridiculous run for the White House. And given that we'll be stuck with Trump for at least half a year more, you can't help but think of Stewart's Trump material that will never be.