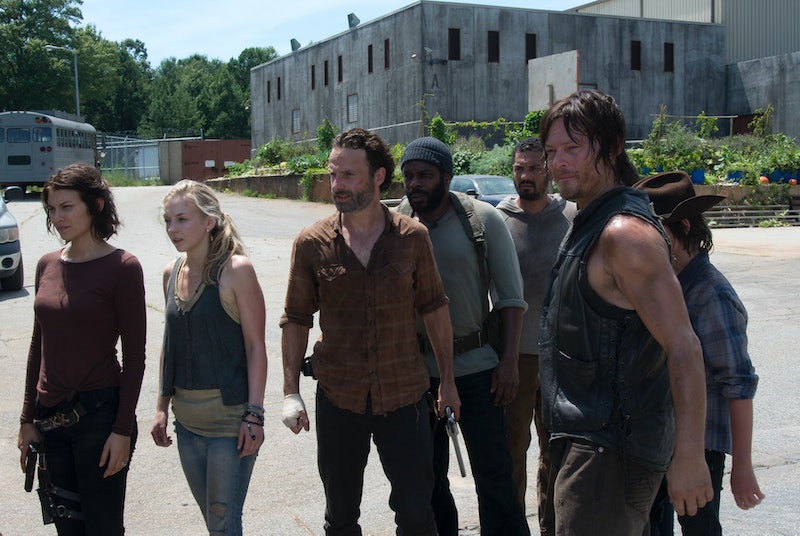 The Walking Dead's midseason finale featured the deaths of a couple of the show’s major characters, gasp! But that's not all – along with its shocking deaths, the episode ended with a few questions unanswered. Perhaps this means the show will head in a new direction once it returns in February? But let's rewind to the beginning of the episode: The Governor concocted a plan to take over the prison. Remember how he’s had this plan since last season? Well, it’s finally getting put into motion. As the episode opened, it was revealed that the Governor had taken Hershel and Michonne as hostages. His new group didn't know much about his history, making them blind followers of his plan, especially because he promised the prison would be a safe place for them to live. He told a fairly persuasive sob story to his people, convincing them to be prepared to kill everyone at the prison. (It’s important to note that Lilly was the only one who was skeptical of the Governor’s plan, even though she was questionably in love with him.)When they arrived at the prison, the Governor made himself known by firing some initial shots which got many of the key players at the prison to run out into the yard. The Governor revealed his hostages and stated that he wanted to talk to Rick. Rick, of course, thought he could talk his way out of the whole ordeal and headed out to confront the Governor. We all know what happened last time the two attempted to talk — the Governor definitely cannot be trusted. The Governor made his request to Rick: They have until sundown to leave the prison, or they are going to force them out.So much drama from The Governor! It would be his way or no way. But Rick continued to assure the Governor that they would fight for the prison and they would not leave. So, the Governor took Michonne’s sword and put it up to Hershel’s throat. Poor Hershel, who wouldn't hurt a fly, was bound up and defenseless.

In an attempt to make the Governor see that the two groups could live together at the prison, Rick gave a heartwarming speech to the Governor and his people. Hershel gave a proud smile, but, sadly, the Governor was not so moved. He chopped Hershel’s head (partway) off! Hershel, nooo! So, Rick opened fire and it was all out war. After everyone started firing back and forth, the Governor went back to chop Hershel’s head the rest of the way off. (And we now pause for a moment of silence for Hershel.)Bullets went flying between the Governor’s group and the prison. Yeah, some people were dying, but a few other important things were happening at the same time.

On the way up to the prison, the Governor walked past the bus that Rick was hiding behind. Rick grabbed the Governor and the two got into a rough fist fight. It looked like Rick was losing badly. But right before the Governor could finish him off, guess who finally gets her vengeance on the Governor? Yes, Michonne shows up and takes out the Governor with her sword right through his chest. She could have finished him off completely, but decided to walk away. Lilly was a the one to eventually walk up to the Governor and fire a shot in his head. Some kind of romance that was!The prison had enough fire power to gun down most of the Governor’s people. In the midst of fighting, let’s not forget, there are still walkers. Daryl has the bright idea to use a walker as a decoy — he hid behind one he’d just killed to get close to some of the Governor’s people and took them out. Lizzie even got into the action and grabbed a gun! (Carol would be proud.) She shot and killed one of the Governor’s people — Go Lizzie!Head Count