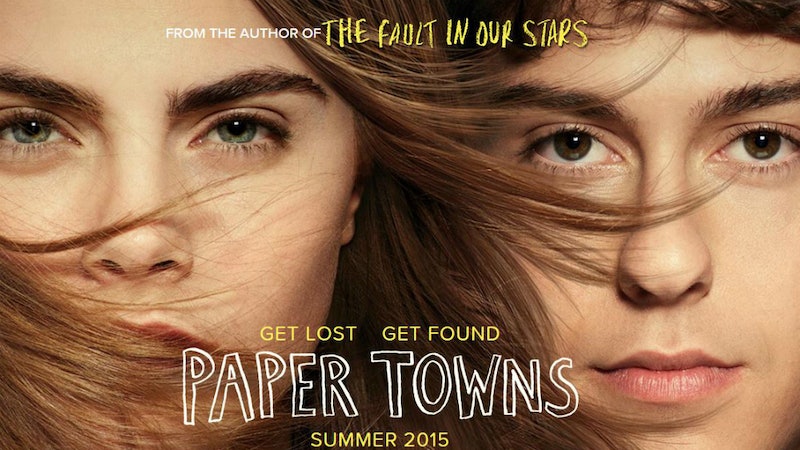 It could double as your perfect summer road trip playlist: Twin Shadow, Santigold, Haim, even a track called "Great Summer" by Vance Joy. Appropriate for a film like Paper Towns , which sees its characters nearing high school graduation, quite literally at the start of summer. The soundtrack was curated by Season Kent, who also supervised the music for Magic Mike XXL and, most memorably, last year's The Fault in Our Stars. Kent seems to have a super-sense for the subtle variations in a film's tone, and it shows in the different results between these two most recent John Green novel-based movies. So how does the Paper Towns soundtrack compare to The Fault in Our Stars' ?

Much of the comparison relies on mood — The Fault in Our Stars features artists not exactly known for their effervescence (Birdy, Ed Sheeran, Kodaline), and a careful selection of the more somber tracks from bands like M83 ("Wait") and Lykke Li ("No One Ever Loved," a track recorded just for the TFIOS soundtrack). In contrast, Paper Towns' energetic foundation is formed by Vampire Weekend, Grouplove, and The War On Drugs. What this means is that it's not the fairest comparison — each set of songs perfectly reflects the tone of the film it accompanies, and Paper Towns is frankly just a bit less of a downer than The Fault in Our Stars. High school nostalgia pales in comparison to terminally ill teenagers.

First impressions are everything: The Fault in Our Stars opens with slow-burning Ed Sheeran-led "All of the Stars," while Paper Towns kicks it off with Santigold's perfect pop confection "Radio." Both tracks epitomize what makes their respective singers awesome, but Sheeran's makes you feel a bit more like taking a breather before listening to the rest of the soundtrack. Santigold's, in contrast, wonderfully sets up what's to come, and is one of those instances where a movie's music is emotionally taxing than its screenplay. Paper Towns chalks a few points for listen-ability, though there is definitely a time and place for The Fault in Our Stars' blend of slow anthems and power ballads.

Both soundtracks feature original Grouplove material, and I'm hard-pressed to pick a favorite. "Let Me In," from TFIOS, typifies the anthemic qualities that make that soundtrack so wonderful, but "No Drama Queen" similarly fits in flawlessly with the Paper Towns track list. But Paper Towns pulls ahead by virtue of the rest of its original music. It recruits a really awesome group of musicians to record completely new tracks for the film. Santigold, for example, hadn't released new music since her last full-length album three years ago. Her track for Paper Towns, "Radio," also hints at more new material to come at the end of the year. The film's star, Nat Wolff, also recorded the soundtrack's closer "Look Outside" with his brother and Naked Brothers Band bandmate Alex. For The Fault in Our Stars, musicians such as Birdy and Lykke Li recorded new material, but the majority of it came from preexisting tracks.

The Paper Towns soundtrack seems to fall behind in the emotional range it shows (it's pretty universally peppy, though the melody belies some of the lyrical depth), until it reaches the third-to-last song — "Used To Haunt," by the Mountain Goats. It's piano-driven, with a simple drum line, and a painful kind of bittersweet that immediately tones down the energy that preceded it. The Fault in Our Stars's soundtrack does the reverse with its more energetic tracks, elevating it out of straight heartbreak with "Boom Clap" by Charlie XCX) or the STRFKR track "While I'm Alive."

Perhaps it's because we're in the midst of a heat wave, but the Paper Towns soundtrack just feels right right now. There's a time and a place for each of the albums, and both are brilliant in their own ways, but the soundtrack for sunny, sweaty late July feels just a whole lot brighter and a bit less blue.