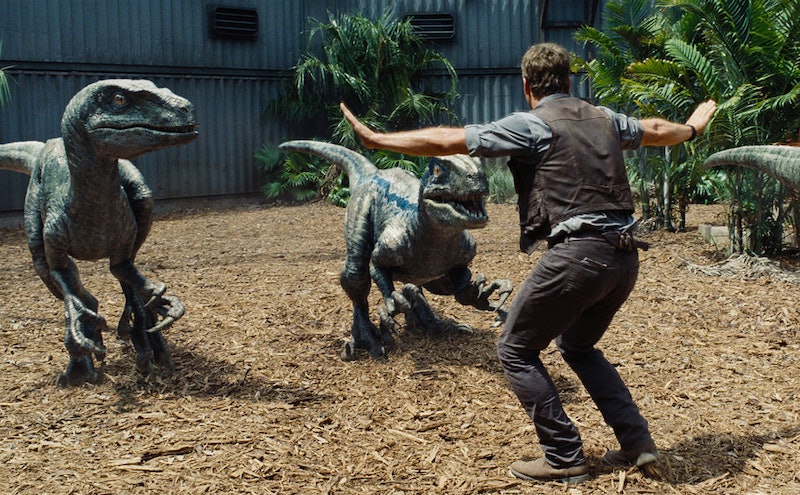 Chris Pratt has a lot of reasons to be happy. The former Parks and Recreation star has risen to worldwide fame in the past few years, and that doesn't appear to be slowing down any time soon. He proved his star power with the huge success of Jurassic World and is already signed on for any and all subsequent sequels. Pratt also has gotten a lot of attention via digital media, as Jurassic World memes and GIFs have inundated just about every corner of the internet. Everyone has been getting a huge kick out of these gems, but guess who's enjoying them most of all? Chris Pratt, of course.

Pratt's famous velociraptor scene has been made into a meme, and people are getting very creative with it. Zoos nationwide had a blast substituting all kinds of animals for the raptors, and internet users recreated the scene with a variety of other creatures. Even Robert Downey Jr. jumped on board, sending a meme to Pratt via Twitter. It seems that no one is immune to the appeal of Jurassic World and its charming lead actor. Here are some of the most Pratt-tastic memes and GIFs from Jurassic World and his off-screen adventures.

This guy even has the vest.

Pratt wrote on Facebook, "Lego Owen at Republique Square. He seems kind of pissed about something. I didn't ask but I'm guessing it had to do with socialism? I don't know. He might just be tired."

3. Pratt Runs From a Terrifying Feline

There is an entire Tumblr page of the Jurassic dinosaurs replaced with cats. Bravo, internet.

Pratt posted this to Facebook with the caption, "Thank you to the parents of this little one. You've made my day. Oh man! I'm crying laughing."

Caption: "Lego Owen needs this bitch to get out of the way so he can see what everyone else is looking at." I feel ya, Owen.

The actor showed his stiletto skills on The Late Late Show. Graceful, no?

8. And Tolerates A Little Raptor Aggression

Pratt was pranked by some life-size raptors, and was a totally good sport about it.

9. Because at the end of the day, he knows who's winning.

You guessed it: Chris Pratt. On the internet, and in life.