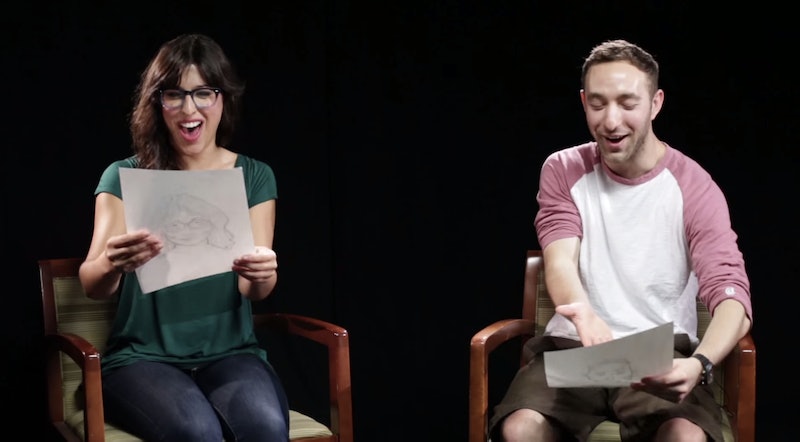 If you're living in a romance novel, then you know just how to describe ~bae~. Their jaw so chiseled it could cut through wax, or their eyes as blue as some body of water you once saw, or their smile that blossoms like the rose in adversity — the usual blah. That's all well and good for McDreamies, but what about the rest of us goons in the real world? Distractify had couples describe each other to a police sketch artist, and let's just say the results were a tad less than romantic.

I will say that this is, at the very least, much more heartening than that Dove commercial where women were asked to describe themselves to a sketch artist so they can compare their own critical version with the way somebody else saw them. The significant others in this video seem to try to do each other justice. To run this little experiment, the sketch artist met with each person individually and had them describe their partner to the best of their ability as he sketched their description. It might not sound that hard, but just think about it for a second. Picture your One True Love in your head. (If you're picturing Andrew Garfield, GTFO, he's mine.) Can you really boil bae down to the sum of their parts?

FAIR. At least it led to some hilarious results. They started with the ladies:

I have to say, the ladies were trying really hard. More than I would have, at least. ("Beard" is pretty much the only descriptor I've needed for AG these past few years, to be fair.)

Then the gentlemen were up to bat:

Eepers! There's some honesty hour for ya. To watch the whole thing and see the hilarious reactions when the couples show each other their end results, look no further:

Want more of Bustle's Sex and Relationships coverage? Check out our new podcast, I Want It That Way, which delves into the difficult and downright dirty parts of a relationship, and find more on our Soundcloud page .