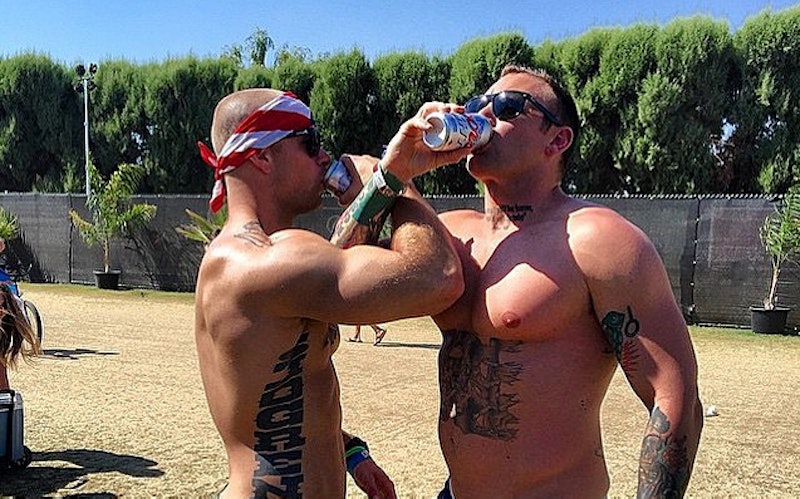 Between the thinkpieces (including one by yours truly), the bawdy vodka-aunt Facebook statuses, and the plethora of discussions on Total Frat Move, 2015 is shaping up to be the year of the dad bod. There's no denying its cultural impact among fraternity brothers and real fathers alike, but is dad bod a real thing? That is, is it an actual, biological phenomenon? According to a recent study, it could have its roots in more than just a few too many beers and not enough exercise. In fact, the cause might be found by looking at the name of the concept itself — "dad bod" could be connected to a case of good, old-fashioned fatherhood.

The study, published in the American Journal of Men's Health, looked at the body mass index (BMI) of over 10,000 men over the course of 20 years. Specifically, the researchers focused on whether the men became fathers, and if so, whether they lived with their children or not. Whether they were a "resident father" or not, however, the result was the same: After accounting for factors such as age, income, race, and marital status, researchers found that having children was linked to weight gain. For dads who lived with their kids, this worked out to around 4.4 pounds, while non-resident fathers gained around 3.3 pounds. In contrast, men who remained child-free actually lost weight.

Although previous research has shown that men tend to adopt healthier habits when they become fathers, Garfield pointed out that this could be outweighed by the needs of their children.

"I see patients all the time who, when they become fathers, the first thing that happens is their exercise drops off," lead author Dr. Craig Garfield said, according to Today. Add between the lack of sleep, which has been consistently linked to weight gain, the high-calorie nature of many children's foods, and the struggle of juggling work and family, and it's easy to see how worrying about weight would fall by the wayside. (As always, pun intended.)

On the surface, it seems like we can conclude that fatherhood is to blame for the squishy, pre- Jurassic World Chris Pratt bodies of the world. In fact, news outlets are already doing what they do best: Running headlines simplifying the study's results to make them seem absolutely true. As always, though, the truth is more nuanced than it appears.

Researchers have long agreed that BMI isn't an ideal measure of obesity in adults. In fact, the mathematician who created the formula explicitly stated that it wasn't intended to be used on an individual basis; rather, he designed it to provide a way to gauge the obesity of general populations... 200 years ago. A 2008 study looked at the validity of BMI in diagnosing obesity, and it found that it had "limited" accuracy in individual cases.

Does that mean we should completely discount the current study's results? Of course not. Garfield was careful to note that having children is a "potential social determinant of health," just not the be-all, end-all cause of weight gain in men. Childcare is one of the most stressful activities out there, and it makes sense that men would gain weight in the process. Equally importantly, this is the first study to specifically look at the relationship between having children and weight gain for men, so undoubtedly there will be more research supporting their conclusion in the future.

On the other hand, that also brings me to my second point: why is this the first time researchers have specifically studied weight gain and fatherhood? There are studies upon studies upon — you guessed it — more freakin' studies linking motherhood to weight gain, starting from pregnancy and extending into childhood. Why is it that 2015 is the first time someone has looked at weight gain in fathers?

Most telling is the treatment of the study's results. Dad bod, in my opinion, is inherently sexist. While men are congratulated for their "human, natural, and attractive" bodies, weight gain is seen as a moral failing in women. Look at the attention super-fit model Sarah Stage got for her six-pack during pregnancy, or the focus on celebrity post-baby bodies. Men are allowed to lose their abs after they become fathers and still be considered attractive, but as soon as women get a little squishier, they become undesirable.

Someday, hopefully, we won't have to debate the merits of "dad bods" versus "mom bods" at all. Instead, let's just celebrate everyone's bodies for being exactly what they are: fabulous.