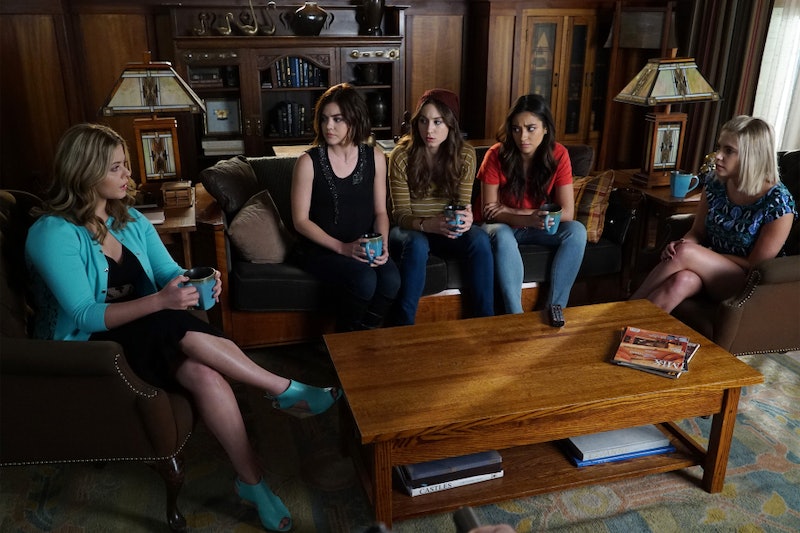 When it comes to a show like Pretty Little Liars , obsession is nine tenths of the law. You don't just love this show, you need this show in your life. Personally, I can't even really remember what it was like when I wasn't spending my days theorizing over A's identity. (Fresh air and sunshine may have been involved, but again, I'm not entirely sure.) And now that we're so close — well, closer than we've ever been before — to unmasking this infamous PLL figure once and for all, I've found myself growing more and more paranoid as to who A could potentially be. Is Wren really Charles? Is Sara Harvey working for A? AM I A?!?!?

OK, so that last question was originally intended as just a joke. Obviously, I can't be A… right? But then again, ruling anyone out of the suspect list feels like a careless mistake given how sneaky this show can be. A has more than proven to have eyes everywhere, so who's to say we're all completely innocent in all of this? For all you know, you (or the person next to you) could be the culprit we've been searching for all along. So just in case you're starting to seriously question whether or not you're to blame for the terrors of Rosewood, here are some tell-tale signs that you may, in fact, be A.

1. You're Unable To Account For Your Whereabouts Between 8 & 9 p.m. On Tuesdays

You're unreachable to all of your friends and family, no matter how many times they call or text. It's almost as if you've fallen off the face of the earth. Is that really normal behavior?

Sure, you can credit that to the digital age we're now all currently living in, but… you never know.

3. For You, Money Is Never In Short Supply

You assume this is your parents doing, but is it really? I'm normally not one to question a good thing, but for the love of God WHERE IS THE MONEY COMING FROM?!?!

4. Your Ability To Predict What's Going To Happen Next Is Borderline Insane

It's almost as if you can see the future… or perhaps it's because you're the puppet master pulling all the strings.

5. You Love The Color Yellow

Some might even say you love it a little too much.

6. You Know The Liars Inside & Out

In fact, now that you think about it, you've become pretty obsessed with them and tend to stalk their every move. Sound familiar?

7. You've Also Been Super Jealous Of Them On More Than One Occasion

Their clothes… their friendships… their boyfriends (*cough, Caleb, cough*). These are all things that you wish you had.

8. You Own Black Gloves & A Hoodie

They were gifts, I swear!

9. You Secretly Don't Want To Know Who A Is

You'd never admit it out loud, but a big part of you loves the chase too much to see it come to an end. Well, either that or you just don't want to get caught red-handed.

For more A theories, check out Bustle's latest PLL podcast below: