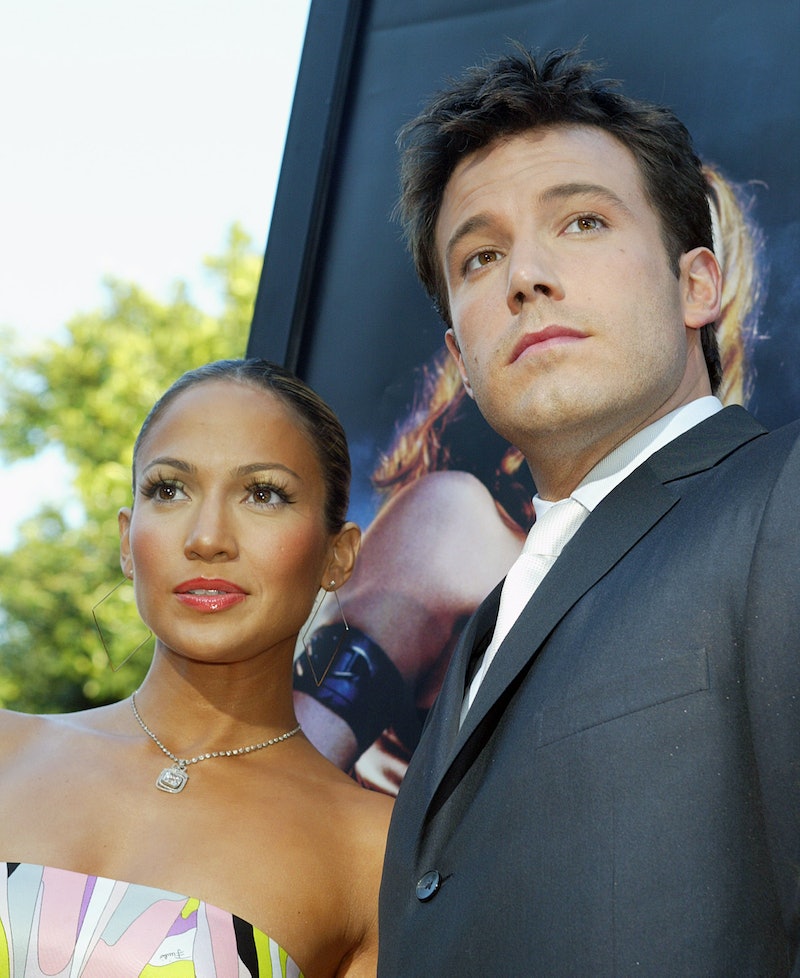 I may have been a mere 13 years old when Ben Affleck and Jennifer Lopez broke up back in 2004, but let me tell you, I remember their relationship well. How could you not, really? While Bennifer may not have spawned any children, Gigli sure created an unbreakable (and inescapable) tie that binds them together for practically... oh, all of life. OK, maybe that's a slight over-statement, but until the day I hear their two names mentioned together without someone referencing their infamous movie flop, I'm going to stick with it.

It's been such a long time since Ben and J. Lo were an item, you may have actually forgotten the reason they called it quits in the first place. But now that Affleck's divorcing his wife, Jennifer Garner, it's led a lot of people to wonder whether the actor will rekindle things with his old flame, Jennifer Lopez. So why did Lopez and Affleck break up, anyway? Allow me to refresh your memory...

At the time of their breakup in January 2004, Us Weekly editor Janice Min sat down with Good Morning America to spill what Lopez's publicist allegedly claimed to be the reason for the split. While the official reason was never confirmed by either of the star's reps, Min said:

He (the publicist) basically told us, you know, yes, it's true, it's over, but please respect her privacy right now. She would like to grieve the relationship in private. It was a situation where she wasn't happy with some of the lifestyle choices that were going on. She is really a goodie-goodie. Contrary to what a lot of people think, the way she dresses and behaves, in public she really is quite a square.

I'm not exactly sure what was meant by her "behavior," since J. Lo has pretty much always been a class act, s moving on... Another source apparently also told the publication that Lopez was "tired of waiting" for Affleck to finally commit, since she allegedly wanted to start a family at the time. But here's another big factor that the source claimed led in the breakup — and it's pretty telling: Lopez was allegedly growing "weary" of her Affleck's regular casino trips. Now, if you've been following Affleck at all in the last year, it's safe to say that little rumor probably had some merit. In 2014, Affleck was caught counting cards at a Vegas casino and was promptly booted. And following news of the actor's divorce in June, it was widely speculated that Affleck's alleged gambling addiction may have played a major role.

But rumors aside, when it comes to his split with J. Lo, the actor did speak out about it himself — four years later. In a 2008 interview on the British TV show Live, Affleck shared:

I think Jen and I made a mistake in that we fell in love, we were excited and maybe too accessible. I don’t think either of us anticipated the degree to which it would take on a world of its own.

The star chatted further about the pressures of all that public scrutiny four years later in 2012, while sitting down with GQ. In a candid interview, Affleck said:

I think I just ran away. You can only handle so much. I moved for a while to this place in Georgia that I

have, was able to get away, by and large, from stuff. Come up with a plan for how to do something with my life that doesn't put me in the crosshairs of this sort of thing.

The 2004 breakup apparently wasn't their first. According to People, Affleck and Lopez briefly split in 2003, after they called off an elaborate ceremony in Montecito, California. While they reportedly reunited just days after, a second wedding was never put back on the calendar and the two officially parted ways a few months later.

Yep, I bet you forgot all that happened, didn't you? I know I sure did. Whether or not the engagement was called off due to Affleck's so-called "lifestyle choices" or the intense public scrutiny is still up for public debate, but the fact remains: their relationship clearly just couldn't weather the storm. Their friendship, however, sure seems to. In 2012, the Affleck told The Hollywood Reporter that he and Lopez are still in contact, and that any drama between them is still very much in the past. Hmm... does this mean we could be seeing a Bennifer reunion in the near future? Looks like we'll have to wait and see.