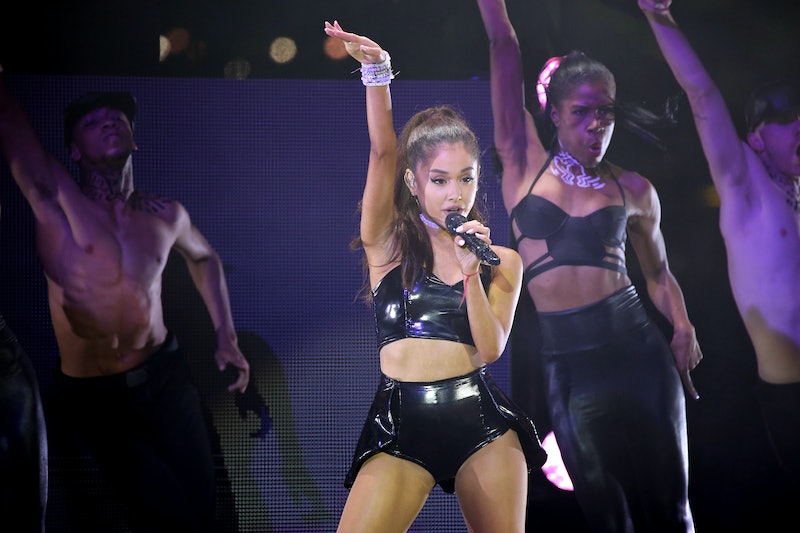 July has not been kind to this pop princess. First, Ariana Grande was caught licking doughnuts on video over her 4th of July weekend and now she's been totally snubbed by MTV. The 2015 VMA nominations were released Tuesday morning and Grande's only appearance on the list is in the Best Collaboration category. Last year Grande was nominated in three VMA categories including Best Pop Video, Best Female Video, and again for Best Collaboration. PItchfork has reported that the eligibility period for VMA nominations is July through June, though the exact rules are a bit hazy. If we go with the July—June time period then her singles "One Last Time" and "Break Free" were completely left out of the running. The intergalactic "Break Free" came out in August 2014, so it could have easily been forgotten by voters. However "One Last Time" was dropped in February 2015 and its apocalyptic shaky-cam was a big change from her typical bright and poppy clips.

This year she's recognized alongside The Weeknd for "Love Me Harder" and with Jessie J and Nicki Minaj for "Bang Bang." Though she's got two slots in the same category, she's going up against Taylor Swift and Kendrick Lamar for "Bad Blood" as well as Mark Ronson featuring Bruno Mars for "Uptown Funk." Things are not looking good for Ms. Grande at this year's VMAs.

The typically wild ceremony is going to be one of its biggest in years since it was announced that Miley Cyrus will be hosting. The 2015 VMA's is going to be the year of Taylor Swift, so it will be very interesting to see what happens when these two pop mega stars collide on MTV's big stage. And somewhere in the audience, Grande will be watching and sobbing into a doughnut... or something along those lines.

But don't cry for her just yet; Grande is not alone in her lack of nominations. Katy Perry is nowhere to be seen on the list. Her video for "This is How We Do" was completely forgotten. The master of ceremonies Miley Cyrus isn't nominated, but she didn't have any videos eligible this year —Get on those, Miley! Heck, even Rihanna only has ONE nomination and it's for an obscure category, Video With a Social Message. I have a feeling it's going to be one of those they give out on the red carpet. I'm surprised "FourFiveSeconds" didn't get a nod for Best Collaboration. "B*tch Better Have My Money" missed the cut-off by just two days, so here's hoping those mysterious nominee decision-makers don't forget about it. At least Grande is in good company in the snubs category, eh?