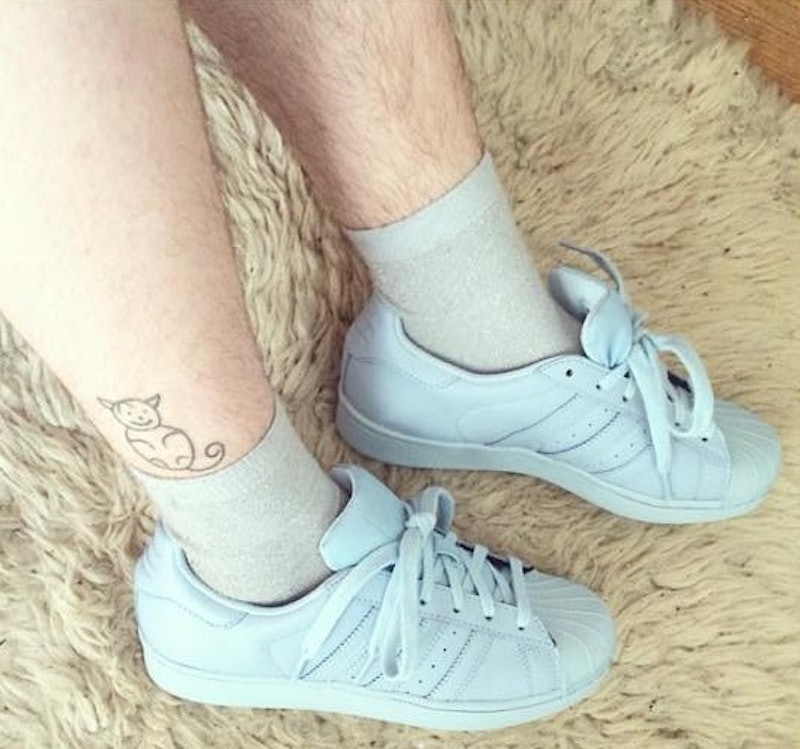 For those of you who haven't heard about it, the skin condition folliculitis refers to the infection or inflammation of hair follicles. Since the very first time I started shaving, I've suffered from folliculitis at every attempt to take razor to skin. It's not just a problem for aesthetic reasons (though those don't help), but because of the pain involved. The bumps it causes are sore, can throb worse than any other pain I've ever experienced, and are itchy to the point where I would sometimes wake up in the middle of the night, scratch my legs until they bled, then wake up in the morning with bed sheets stuck to skinless calves.

All of this was the price to pay for the privilege of smooth legs. I also suffer from polycystic ovarian syndrome, so I felt I had to shave often and everywhere thanks to my fast-growing and thick body hair. All the while, I'd berate the skin gods responsible for doling out body hair curses.

Before going to university, the idea of simply not shaving had never entered my head. I identified as a feminist, but one of the, "You can still shave your legs and fight the patriarchy," variety. I still believe this, of course, but I didn't think that everything feminist women or feminine-presenting people did in their lives had to be a feminist act.

When I arrived on campus, I was faced with a really gross shower situation, an ability to be lazy like no other, a boyfriend who really didn't care if I had a bush or not, and a whole new set of friends who didn't know me as someone who shaved. So I decided they could just know me as someone who didn't shave. There are a million different reasons that women and non-binary babes might have for giving up shaving, but for me, it was more an issue of convenience. I could no longer be bothered with the actual pain that shaving brought me. Plus, it was winter. Who was even going to find out?

Sans shaving, I grew more confident at school than I had been at home. With an occasionally outrageous fashion sense, multicolored hair, and a pretty loud mouth, I was used to the attention of strangers. Of course, it was when I started baring my body and my body hair that the unwanted attention from said strangers escalated.

What simultaneously irritated and delighted me was watching their eyes travel the length of my body — from my sunglasses-covered eyes to my revealing outfit and ample bosom to my hair-coated legs. The men who thought they were simply going to enjoy a leer seemed to have to instantly reassess their conceptions of beauty. Why was I attractive to them when assumed hairless, but repulsive once I revealed a layer of downy fur over my shapely legs?

Without even realizing it, my decision to allow my body hair to grow out became a feminist act. I was directly refusing to play into traditional (not even that traditional, seeing as shaving became a concept in the 1920s) beauty standards. The decision was initially made for my own comfort. But really, the discomfort that it brought other people was what made it entirely worth it. My body had never been a political tool before. Yet suddenly it was able to bring shock to those who looked at it.

I still struggle with the desire to shave my body. Sometimes it's for personal reasons, like the thought of rubbing my hairless legs on cool, clean sheets. Sometimes I even blame my body hair for not getting me laid in a couple of weeks. Sometimes I just feel tired of being stared at in public. It takes a lot of strength of character and will to shrug being publicly shamed off, though, and ultimately, I'm proud of myself for getting through it.

It's been over two years since I last shaved (not including trims) and honestly? I'd feel like I was lying to myself if I succumbed to social pressures and shaved my body. Accepting my body for how it is has been revolutionary to me, regardless of how I came to the decision of not shaving in the first place. Even though I would have found my place in the worlds of feminism and body positivity eventually, my body hair has helped me delve into those movements in ways I probably never would have before.