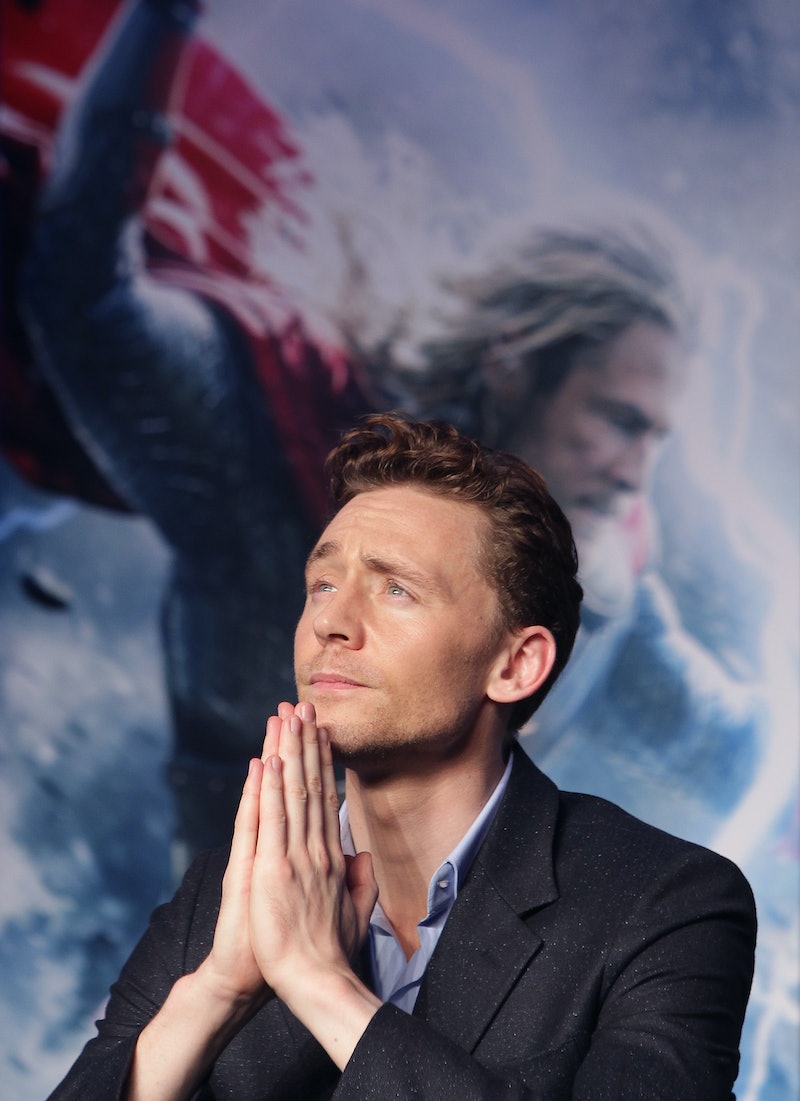 Prepare to freak out, especially if you consider yourself a Hiddlestoner. Judging by a new photo released by the Daily Mail, Tom Hiddleston and Elizabeth Olsen are hanging out, which means they're totally dating... right? This photo of what appears to be the I Saw the Light co-stars just might prove that Hiddleston and Olsen are a couple, like Us Weekly reported in May 2015. However, there are quite a few questions that come with these photos, including: "Is that even Tom and Elizabeth?"

As you can see below, a blonde woman and a tall man are walking very cozily down a street in Oxford. Really, it could be two random people. However, I do believe that is Hiddleston. It looks like The Avengers actor from behind (trust me, I can tell). Plus, he was spotted wearing the same exact clothes earlier the same day. As for Olsen, I'm not so sure.

The Daily Mail believes it is indeed Olsen, especially since she "had earlier been spotted walking in Paris, France in the same ensemble, which consisted of a sleeveless crop top, cigarette trousers, and a dark blue overcoat." What the publication forgot to point out is that Olsen isn't in the "same ensemble." In France, she's wearing a shorter coat and different sandals. In Oxford, the blonde woman said to be the 26-year-old has a longer coat and sandals without backs. Hmm... is it really Olsen? Yes, the blonde walking with Hiddleston is carrying the same purse, but maybe that's a popular purse in the fashion world?

Also, based on this tweet shared by Lizzie Olsen News, the photo the Daily Mail is using to confirm Olsen is the woman with Hiddleston was taken on July 5. The Daily Mail story came out on July 21.

Well, that's fishy. So, is it or isn't it Mary Kate and Ashley Olsen's sister? Maybe by "earlier" the Daily Mail meant a couple weeks earlier...

Look, there's a very good chance that is Olsen with Hiddleston. There's even a chance that Olsen is recycling her outfit from July 5 and is wearing it again, with slightly difference accessories, on July 21. But, if the Daily Mail wants Hiddlestoners to believe that this exact picture is of Hiddleston and Olsen, well, the publication needs more proof, because the actor's fans need a lot of convincing, especially when it comes to his romantic life.

Ever since romance rumors began circulating around these two actors in May, fans have been skeptical. According to an insider who chatted with Us Weekly, "They have been hooking up." The same source said it's "casual," but apparently the two "text when they're apart." Regarding this supposed romance, nothing has really been reported since Us' initial report, except for other rumors that Olsen and Chris Evans are dating. So... she's just dating all of The Avengers stars, I guess? Furthermore, Hiddleston and Olsen haven't been spotted together, save for the above unconvincing photo and that time they attended an event together and posed for the cameras:

Neither have commented about their "romance," but that shouldn't come as a shock. Celebrities are known for keeping their private lives private. Seeing as they've yet to confirm or deny anything and haven't been seen out and about, well, that doesn't mean they aren't together, either. Basically, it's hard to give a definitive answer.

However, if reports like the Daily Mail continue to be released that are just plain fishy, people will probably stop believing these two are a couple.