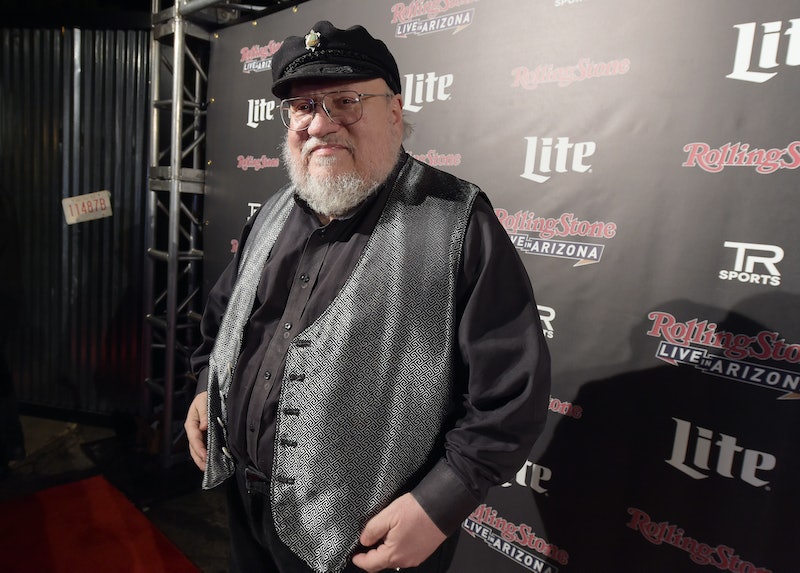 To keep the winners of science fiction and fantasy's biggest awards more diverse, George R.R. Martin is calling on fans to vote at the Hugo Awards — your input matters. Martin has been an outspoken critic of what some are calling “Puppy Gate,” an alleged conspiracy by two online groups the Sad Puppies and the Rabid Puppies to control nominations and outcomes of the Hugo Awards. Bustle covered the need-to-knows of the controversy back in May.

The Hugo Awards are science fiction and fantasy’s most prestigious awards, whose past recipients include Neil Gaiman, Philip K. Dick, John Scalzi ... and a whole bunch of other white guys. However, according to the Atlantic, the award has presented a greater number of women authors and authors of color in its nominees over the past few years. These puppy-moniker-ed groups campaigned to take back the award from what they believe has been a lean toward a progressive, left-wing bias. Once the official nominee list for the awards was presented back in April, it looked like the Sad Puppies and crew had succeeded, as many of the authors recommended by the Sad Puppies appeared on the list.

But a great deal of other science fiction and fantasy fans and authors, including Martin, have been loudly outspoken against the Sad Puppies and Rabid Puppies' influence over the nominee list. So, as the official voting date nears, Martin is asking fans to turn out and vote to show what fans want in their sci-fi.

“This year, as never before, the voice and vote of every true fan is needed to help protect the integrity of the rocket,” Martin wrote on his blog Not A Blog, referring to the Hugo’s iconic rocket symbol.

Martin made sure to lay out the voting process, informing readers that anyone can acquire membership to vote and how, and reminding them about the option to rank “No Award” anywhere in their ranking of the nominees. Voters can rank the nominees in each category of the award, from first place to last place. The "No Award" option allows voters to select "No Award" as their first place option, essentially voting that none of the nominees in a category was worthy of winning the award.

“If you have not voted the Hugo Awards before... You can rank NO AWARD as if it were any other finalist; ahead of some nominees, behind others,” writes Martin.

In a brief reference to the controversy, Martin makes no bones about what he thinks of the Sad Puppies and Rabid Puppies groups:

Who are all these new Supporting Members? Are they trufans rallying to the defense of one of our field’s oldest and most cherished institutions? Are they Sad Puppies, Rabid Puppies, Happy Kittens, Gamergaters? Are those dreaded SJWs and ASPs and CHORFs turning out by the hundreds and the thousands? Are these the Neo-Nazis and right-wing reactionaries we have been warned of? The truth is… no one knows. We may get a clue when the ballots are opened and counted, but even then, the numbers may well just say, ‘Answer cloudy, ask again.’ All I know for sure is that every vote will count.

For all those confused about all those acronyms, apparently, according to another Sad Puppies-critical blog post by Martin, they refer to some creative (read: offensive) acronym-ing that the Sad Puppies group has done to name those who have pushed for greater diversity in the Hugo Awards. SJW, for example, stands for "Social Justice Warrior." CHORFs is one of the more creative acronyms standing for "Cliquish, Holier-than-thou, Obnoxious, Reactionary, Fanatics," which, based on a post on his blog, Sad Puppies co-leader Brad Torgersen appears to have gotten from a Cartoon Network show called Regular Show.

The official last day to vote for the Hugo Awards is July 31, and then we’ll see how it all unfolds at the ceremony on August 19. Now, go forth and vote!