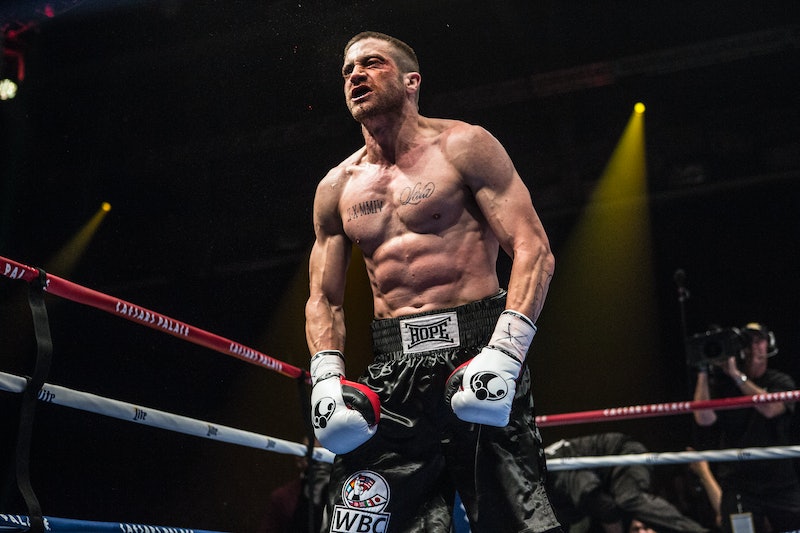 It wouldn't be a summer movie going season without a good, down and dirty sports blockbuster to knockout (pun intended) all the comic book superheroes, fantasy adventures and lewd comedies. Southpaw starring Jake Gyllenhaal is here to fulfill that need and, in a manner of speaking, cleanse our cinematic palette with a grounded story about a down-on-his-luck boxer who recently lost his wife and needs to redeem himself in the ring in order to gain custody and respect from his daughter. It's definitely not a lighthearted summer film, but it does pack on hell of a punch (again, pun intended). But through all the intense boxing scenes, emotional acting, father-daughter issues and various shots of Gyllenhaal's bloody mug screaming into the camera, there is one question that many of you may have: what does "southpaw" mean?

Simply put, the term means that you're left-handed. In Southpaw, Gyllenhaal's character, Billy "The Great" Hope is a left-handed boxer and that makes it pretty obvious why the movie has its title. In the world of boxing, it is also referred to as "unorthodox stance" because the majority of the world is right handed and if you're a left-handed boxer, you're moving in an untraditional manner with everything working against you. In the case of the character of Billy, it's a dead-on metaphor for outside of the ring as well. Yet here's a surprise — although the term is used in a boxing movie, its origin actually comes from the non-contact sport of baseball.

The term "southpaw" can be traced back to the 1880s when Chicago Daily News sports reporter Finley Peter Dunne coined the term when covering the then-named Chicago White Stockings games. Dunne was known for giving colorful play-by-play and when a left-handed pitcher came on the field, he described him as a "southpaw." Since the ballpark faced east and west, home plate was west and a left-hander would pitch from the south with his "paw." Thus, the term "southpaw" was born.The term just stuck, and now it's spread among all sports and birthed a movie named after it in which Jake Gyllenhaal is bloody, angry, shirtless, and fully ripped beyond recognition — which was a role that was originally written for Eminem, who happens to be a southpaw himself (look for the clues in 8 Mile!)Nonetheless, all of us who aren't southpaws will just have to deal with the fact that there will never be a movie called Northpaw... but that doesn't make us any less special.