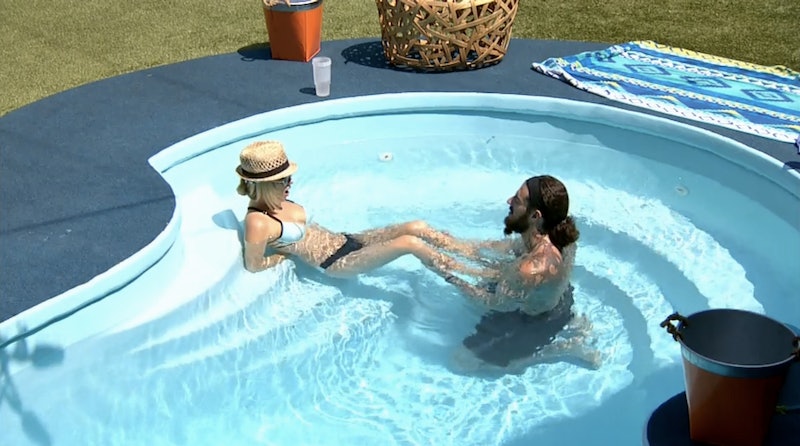 It's becoming increasingly painful to watch Austin's game play on Big Brother 17, and I think the reason is right in front of all of us: The show's newest romance, between none other than Austin and Liz. We may never know what was going through Austin's head in the first few weeks when he was spending lots of time with Liz/Julia without realizing they were twins. This sweet and innocent pre-reveal time may have been confusing to Austin, who was likely wondering why Lizia was hot and cold around him, but at least it kept him focused on the game for a while. Now that we're in a post-reveal world, it's clear that Austin's feelings for Liz affect his Big Brother game and totally cloud his head — and that Liz might very well be playing him.

Let's look at the facts. Austin and Julia have a great friendship going, and I love seeing them interact with each other. It's as if merely knowing that Liz is gone helps him loosen up around Julia and act like, well, a normal human being. Unfortunately, besides those few bright spots here and there, he spends the rest of his time moping around, complaining to anyone who will listen about how much he misses Liz. I'm not sure if that's better or worse than when Liz comes back in and he works overtime trying to get their showmance to thrive.

Early on Tuesday, Shelli got her HOH camera to take photos with the houseguests, and Austin and Liz cozied up for a showmance shot with Shelli and Clay.

It was a cute moment, but it reminded me that Liz is probably playing Austin.

They sleep together and cuddle in bed. They went on a date in the HOH room, and Austin did his best to make it nice and romantic. They are constantly together. Liz really just rolls with it and flirts back, but it's tough to see where her head is at — making me wonder if she could just be manipulating Austin to get ahead. (I guess when Vanessa cornered her last week and told her to decide what to do about Austin and stick with it, she decided that pretending to like him as much as he likes her was the way to go.)

It's a fine strategy, and I would be down with it if it were not so sad to watch them interact on the live feeds or to see her Diary Room on the show. Despite telling Vanessa that she likes Austin but would not pursue a showmance with him, it appears that she does not like him and is pursuing a showmance with him.

Love or hate them, at least Shelli and Clay both seem to be into each other.

Liz's body language sometimes gives her away, and she'll tell anybody who will listen that Austin is like her dad in the house. Ouch. Additionally, her DR moments that make it on the show clearly tell us that flirting and playing with people's emotions is part of her strategy.

Austin needs to get his head back in the game soon if he wants to last much longer in the house. It was bad enough to start the game being seen as a physical threat and BB fan, and adding Liz to the mix — who is likely playing him — isn't doing him any good.

More like this
Is Austin Butler Really Singing in 'Elvis'?
By Arya Roshanian
Bachelor Nation's Blake Horstmann Is Dating 'Love Is Blind' Star Giannina Gibelli
By Jake Viswanath and Radhika Menon
Tamra Judge & Vicki Gunvalson Gave A Hopeful “Tres Amigas” Update
By Brad Witter
Everything We Could Expect In Gabby & Rachel’s Season Of The Bachelorette
By Kadin Burnett
Get Even More From Bustle — Sign Up For The Newsletter