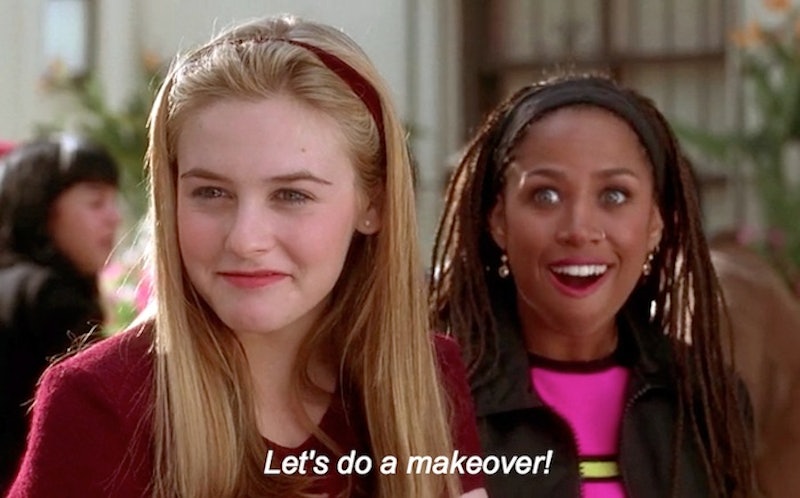 If you're a Jane Austen fan, you've probably seen a lot of adaptations of her novels — from the mostly faithful BBC versions to more radical re-imaginings like the upcoming Pride and Prejudice and Zombies — but Clueless, Amy Heckerling's classic retelling of Emma at a Beverly Hills high school, is undeniably one of the best. This week marks the 20-year anniversary of that film, and there's been a lot of discussion about what makes it so great: the sincerity, the style, the characters. For my money, however, the movie's enduring appeal comes from its perfect match of subject and setting. Emma was positively meant for high school in the '90s.

The novel is all glossy surfaces — parties, picnics, and walks through the woods — and there's never any real sense of darkness or threat. This cheery atmosphere fit perfectly into the hopeful Clinton years, but would have felt terribly out of touch a decade later.

There may never be another Austen adaptation as genius as Clueless, but I've come up with an alternate setting for each of Austen's other novels that might — just might — offer the same level of perfection.

There's something irresistible about the idea of the Bennet sisters dancing their way through the Jazz Age: Jane and Elizabeth may be far too sensible to get in much trouble, but think of the shenanigans Lydia would get up to. Property entails may not have existed in the United States (thanks, Revolutionary War!), but there are plenty of other challenges the Bennets could face from a homestead that's slowly crumbling into the swamp to old money's distaste for new. Moreover, the updated setting would allow for a deeper consideration of the novel's questions about class, and even extend that thoughtfulness to issues of race.

Sense and Sensibility in 1940s Hawaii

The steely pragmatism of Elinor Dashwood and the flighty romanticism of her sister Marianne would fit perfectly into a World War II setting. They would each find ways to contribute to the war effort after Pearl Harbor: Elinor by working in a factory and Marianne by visiting the wounded. Meanwhile, Edward would be called away to fight, and the Colonel would be tormented by the fact that his injury keeps him on the sidelines. The stakes might be higher, but the emotions would be the same.

Persuasion is Austen's sharpest and saddest novel, making Anne Elliot's story a perfect fit with the prosperous post-War period, when Americans were happily hiding our problems behind white-picket fences. The plot could stay quite faithful: in high school, Anne Elliot fell in love with Frederick Wentworth, a boy from the wrong side town, but after he was drafted, she was convinced to break up with him. Ten years later, she's a school teacher in the same town and Frederick returns, now a war hero with a G.I. Bill funded college degree. Gossip ensues!

Northanger Abbey tells the story of young woman who figuratively sees things that aren't there — why not make her delusions literal? Having Catherine's mistaken beliefs about the Tilneys caused by her copious drug usage could add to the story's potential for both humor and dread as well as providing the opportunity to satirize the youth culture of the day, just as Austen did originally.

Imagine Austen's most morally upright heroine plunged into the 20th century's most dissolute decade — the poor thing wouldn't know what hit her. In this version of the famed moral novel, Fanny Price would be a philosophy student at Columbia (on scholarship, of course) watching as her beloved cousin is pulled further and further into the wild lifestyle of New York stockbrokers.