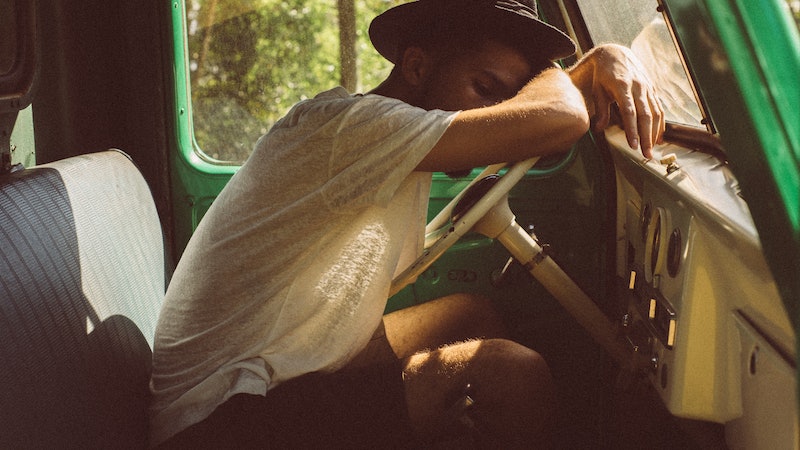 We've all been there: You're in the middle of a passionate, sexy encounter with a guy, and everything is going swell, until tragedy strikes — he loses his boner, or else can't get one in the first place. Of course it's not the end of the world, and you should never make a guy feel ashamed or embarrassed if he has trouble staying hard because he's probably already kicking himself for the mishap. In spite of your gut instinct that tells you "Hey, I'm really hot and I was just doing something super sexy down there," you might be left feeling, even in the smallest capacity, that his rapidly deflating erection is somehow your fault.

Despite what porn might have us believe, most men are not boner factories with the insane ability to stay hard for five hours while also jackhammering away. Both men and women experience difficulties getting and staying aroused, and losing a boner is no reason to call off the sexcapades for the evening. It's natural to feel like a man's loss of arousal is your fault; after all, you're the one inspiring the erection in the first place. Rest assured, though, that there are a million and one reasons why a guy might suddenly go limp, and it's almost guaranteed that it's not because of anything you're doing. (Barring extreme circumstances, like you for some reason brought a chainsaw into the bedroom and terrified the sh*t out of him.)

Here are seven reasons he might have trouble getting or staying hard — and the best news is that none of them are you.

Up to 20 percent of all erectile problems are caused by stress and other psychological issues. Maybe work has been extremely high-intensity lately, and he inadvertently brought some of that tension home with him. If his brain is preoccupied and full of negative feelings, it makes sense that his penis might be somewhat less than eager to respond to your sexy come-ons how it would under other, more carefree circumstances.

If a guy is on medications that treat depression, like Zoloft or Prozac, it can inhibit his ability to get hard. What's even more tricky is that, if you aren't super well-acquainted yet, it could be awkward for a guy to have to explain the reason he's having difficulty in the erection department. While there's not a whole lot you can do to combat this particular issue, it's still worth noting that certain medications can affect his sex drive, so try not to judge anyone too harshly if you don't know their medical history.

Whether or not a guy smokes has a huge effect on his ability to get an erection — 40 percent of men with erectile problems are smokers, one study found. Because smoking does serious damage to blood vessels, someone who smokes is likely to have issues with blood flow in, ahem, certain parts of the body. The good news: A 2011 study found that men with erectile dysfunction who were able to quit saw results in the form of "firmer, wider" boners. Sounds like as good a reason to kick the habit as anything I've ever heard.

Drinking affects everyone differently, but "whiskey dick" is definitely a very real phenomenon. Because alcohol is a central nervous system depressant, it affects things like respiration and circulation, both of which are crucial to getting and staying aroused. Alcohol can also dehydrate your body, which means there's less blood to flow...you can guess where. If you have chronic whiskey dick, consider laying off the booze before bringing a lady or gentleman home.

Libido is affected by levels of testosterone, and if a guy's are low, it can result in a reduced or nonexistent sex drive. Although getting older is usually the main cause for drops in testosterone, younger guys can also be affected, especially if they have certain illnesses known to lower testosterone, like diabetes, liver disease, or COPD. Erectile dysfunction is also an early sign of things like heart disease and thyroid problems, so there's a chance that a guy who consistently has problems getting hard should consult a doctor to make sure there aren't more serious health concerns he should be worried about.

Everything from weed to more serious drugs like oxycontin and heroin can lower your sex drive. While it's certainly true that some people genuinely enjoy doing drugs recreationally — and they can even improve sex in some ways — there's no denying that if a guy is having problems staying hard while having sex high, the drugs could definitely be the culprit.