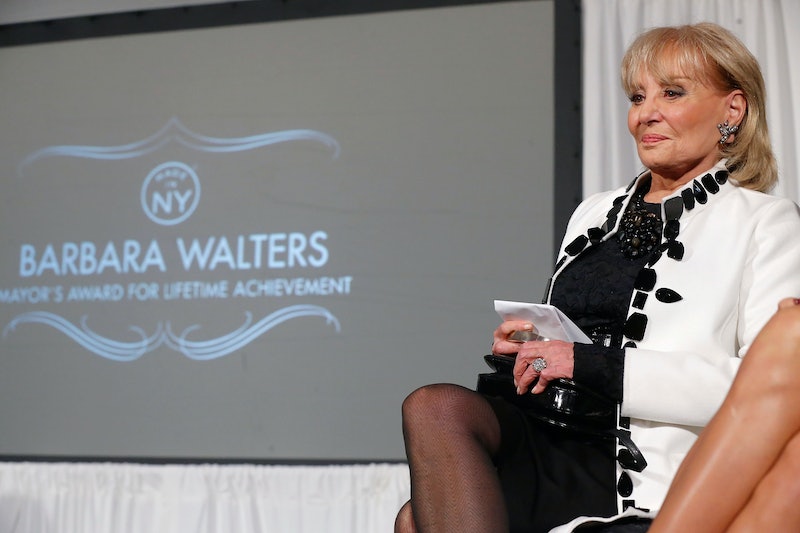 Barbara Walters knows what makes a person fascinating. And no, it's not just the books they sell, the movies they have to plug, the international secrets they need to divulge: it's about the whole person. Fascinating people beget fascinating anecdotes and stories, and that's all Babs needs for her annual ABC News special, The Most Fascinating People of the Year . And while some may be fit to speculate about who is holding the number one spot, they've forgotten about the 9 other people deemed to be far more interesting than you and your collection of tiny, quirky owl sculptures (no matter how well-painted or interestingly-affixed they might be. Sigh).

So who's on the list thus far? And why are they more fascinating than you, in all your post-Thanksgiving day at the office glory? Well, we hate to break it to you (that's a lie), but they're pretty boring people, all-in-all. And the real reason they're so fascinating might not be as obvious as you might think. So we've explained it a bit for you novices, below. You know, so you're prepared for the special when it airs on December 18 at 9:30PM.

Jennifer Lawrence: Jennifer Lawrence is fascinating because she's actually just the Internet. She's not a real person, but rather a series of interactions born of GIFs, Tumblr posts, fan fictions, overactive facial muscles, and bored interns, sick of running for coffee and hoping to find a little glee amidst their work "research." The whole of the Internet banded together and threw their most quirky and endearing qualities into the cauldron and double, double LOLCAT and trouble: J.Law was born. And from the flames came adoration, obsession, and an inability to do anything other than stare into the sum of its parts with awe and wonder: Jennifer Lawrence, you fascinating moonbeam of modern society.

Edward Snowden: NSA whistleblower Edward Snowden is fascinating not because of his attempts to bring down the National Security Administration's mass surveillance on its own people program, but because he's an avid fan of Japanese culture. Surprising though it may seem, Snowden is actually a huge Japanophile, having studied the language prior to working for a US-based anime company. A computer analyst who's into anime? That is truly original and fascinating. Next you're going to be telling me he was into martial arts or something! (Oh, he was? Fascinating!)

Robin Roberts: Robin Roberts isn't fascinating because she's an intrepid survivor of life-threatening illnesses — such as her 2007 breast cancer diagnosis or her 2012 myelodysplastic syndrome diagnosis — but rather because of her connection to another fascinating person: Miley Cyrus. Did you know that Roberts actually made a guest-starring turn on the singer's popular Disney program, Hannah Montana? It's true! I guess Roberts will be considered an insider now, with intimate knowledge of the evolution of the girl who twerked.

Miley Cyrus: Speaking of Cyrus, yes, she is on the list as well. And, well, we're actually really not sure why she's even on the list. We can't think of a single thing people would find fascinating about her existence. Especially in 2013. She's been so silent on all the matters that, well, matter. Plus, she's not all that interesting, really. We can't even think of anything to say about her. Weird. Hmmm, oh well, I guess every show needs a filler interview. Nothing to see here, move along.

Kim Kardashian and Kanye West: Oh, well, I mean, come on. Kim Kardashian and Kanye West are THE most fascinating people of our time. In fact the whole hour should be about them. Kanye should be allowed to just talk it out, talk it all out, without the silly interloping of Barbara Walters' "questions" and "journalistic abilities." Every single blink, fart, shoe tap, and clothing choice of these two is guaranteed to land itself in the songs of history, the poems of time. Because they are so important — they bring peace, prosperity, goodwill, and good sense (fashion or otherwise because they're the embodiment of human perfectionism) wherever they roam, and their offspring (North West) shall surely rule over the lands of America. From sea to shining sea, indeed.

The Cast of Duck Dynasty: I just spent two weeks in Florida and I've gleaned all the fascinating information one can about these folks. Brought to you by Wal-Mart.

Prince George: Pip, pip and cheerio! The royal offspring has arriveth! Is there anything more fascinating than a tiny human, dressed in yards and yards of fabric, tufted within an inch of his little life, gilded with velvet and manners, and fine breeding. Would it were possible to speak baby, Walters would have all the interview she needed. What's most fascinating about the young heir to the fanciest throne ever paid for by welfare is actually his humility. It'd be easy for a baby of his importance and rank to let the whole thing go to his head: crying constantly, demanding milk and nappy changes at all hours of the day. But no, young George is a humble lad, fit to handle his own business (he even wipes his own ass!) without the nuisance of parents or the royal guard. If only more babies were as intrepid as he. Long live the prince!