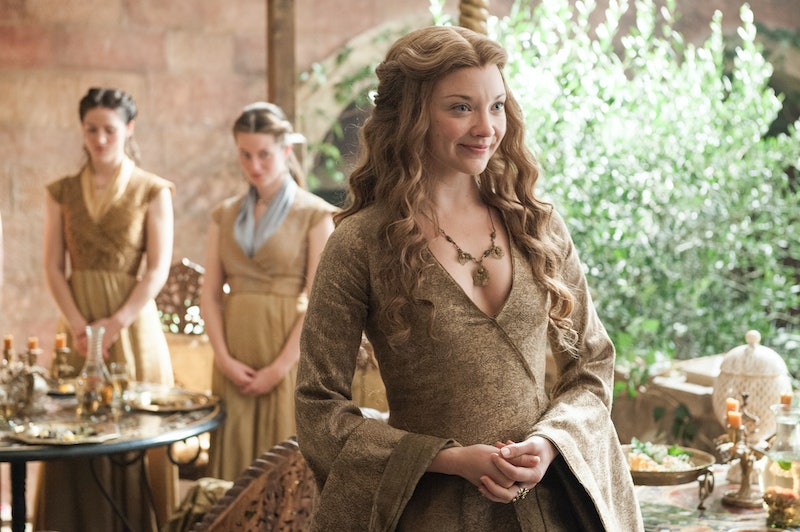 With all the recently implemented rule changes in the Primetime Emmy Awards, there's some confusion as to what constitutes a drama versus a comedy. One show there was absolutely 100 percent no confusion over was classifying HBO's Game Of Thrones as a drama — that show is as serious as a freakin' heart attack, you guys. But, Game of Thrones actually has some funny moments. You know, in between all the blood and death and general carnage. When little girls aren't being burned alive or beloved characters getting their heads smashed into a pulp, the writers often do a good job of alleviating the seriousness with some well-placed humor. It's just often immediately forgotten about, since the OMG-worthy talking points everyone is discussing next day are the deaths and the betrayals and the dragons. (Never forget the dragons.)

The Game of Thrones Season 5 finale, "Mother's Mercy," was even more depressing than usual for this show. (Yes, I'm talking about Jon Snow's death. Still not over it. Never will be.) So, just in case you still need some cheering up one month later, here's a reminder of some of the times the show actually made us laugh, and there are more moments than you think.

Tywin's pompous entrance into the throne room after saving all of King's Landing from Stannis' army is slightly undercut by the fact that his horse just shat all over the floor.

Speaking of undercutting solemn occasions... When we first meet Catelyn's younger brother Edmure, he's epically failing at lighting his own father's funeral pyre. The hilarity of Edmure's silent humiliation is only increased when his gruff uncle Brynden steps in, fires a shot, and walks away without even looking to see whether it landed or not. (It did.)

Badly translated lines are always good for a chuckle or two. Like Bruce Banner's mangled "You wouldn't like me when I'm hungry" in 2008's The Incredible Hulk, this meaning of Tyrion's sentence is utterly lost in translation. (For the record, he intended to say his Valyrian was a bit rusty. Easy to see how one would get those two words confused.)

Curmudgeonly old Walder Frey has had eight wives, 22 sons, seven daughters, and god knows how many bastards and grandchildren. So you'll forgive him for blanking on the name of one of his prodigious brood when introducing them to Robb Stark. "My granddaughter... Waltha? Walra? Waldina." "I'm Mary." "Fine." Classic Frey humor.

Only someone as close to Cersei as her own baby brother could find a redeeming quality in the scheming queen... and somehow he found two!

As the aging, but razor-tongued, Queen of Thorns, actress Diana Rigg has gotten to deliver more than her fair share of zingers. But, she got one of the best entrances in Game of Thrones history this year, in her first Season 5 appearance.

We all knew the Cersei Lannister-Loras Tyrell engagement was doomed from the start. Too bad this amazingly awkward interaction between them is the only glimpse at what mismatched spouses they might have made for each other.

Renly must have been hungry when he went to this parlay with his older brother Stannis. Melisandre's exhortation of her go-to prophecy-speak leads to a nice food-themed pun.

Cersei can't say she wasn't warned. As Maggy the Frog told her in Season 5's opening flashback, "Queen you shall be... until there comes another, younger and more beautiful, to cast you down and throw some epic shade." Or something like that.

This was probably the last time most viewers liked the stubborn king before he used his adorable daughter as kindling. There's just something endearing about the fact that Stannis is a stickler for proper grammar.

More of that, please.

12. That Time He Immediately Slapped Him Again For Good Measure

Thank you. So satisfying.

14. That Time Even His Own Mom Got In On The Slapping Game

You know that phrase "a face only a mother could love"? Yeah, doesn't even apply to Joffrey.

15. Oh, And That Other Time That Tyrion Slapped Joffrey

That one was good, too.

Oh man. This is without a doubt the single funniest scene in Throne history — and, appropriately enough, it involves a bunch of chairs. Try to re-watch this clip without laughing, I dare you. It's impossible.