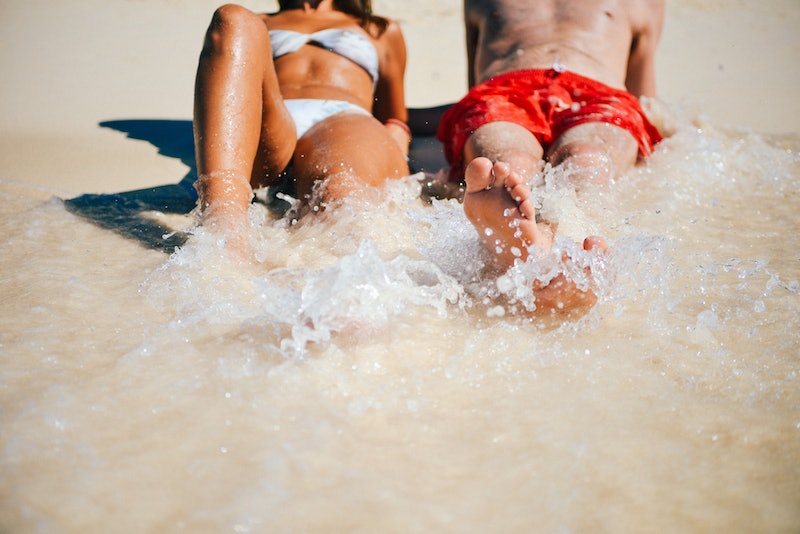 According to a new survey, women are more likely to engage in sexual risk-taking when traveling. It’s in places, far from the reality of the their usual day-to-day, that women just like to break free and get a little wild, says the study, and because of it, risk is higher than it would be at home. Why am I picturing Ibiza when I write this?

The online survey asked 850 U.S. women between 18 and 50 about their tourist activities. What it found was that even women agreed that their sexual behavior fell in the risky category, with unprotected sex and becoming intimate while intoxicated or high being the big ones. But why this is the case was what the researchers really wanted to figure out and what they found is that an altered sense of reality can flip a woman on her head and she just lets go. It’s in these situations that risky sexual behavior is at its highest because the long-term consequences of, say, contracting an STI, just don’t come into a woman’s head.

There’s also the component of “liquid courage” and “a psychological excuse” that allow women to escape into a world where the things that are more taboo in their real life basically become, “Woohoo! Aww yeahhh!” in their vacation life.

“Perhaps in everyday life we are so overscheduled and disciplined that once we find ourselves in a situation where there is no schedule and no social control, and the only time we have to keep in mind is the departure of our plane, it releases us from many of our psychological barriers and inhibitions,” says Liza Berdychevsky, a professor of recreation, sport, and tourism.

This pattern of risky behavior has even caught the eye of the tourist industry in Australia. Now when you arrive at Sydney airport you can see a poster that’s a friendly reminder to international tourists to use condoms and play it safe. The United States has yet to address the problem.

But getting a little wild and banging that insanely hot tattooed guy or girl you just met five minutes ago in the bar bathroom isn’t the only thing that vacation or summer flings brings out in us. Here are six other things science has to say about vacation sex. (And before you read on, be sure to check out Bustle’s new podcast, I Want It That Way, which delves into summer flings, and find more on our Soundcloud page.)

Unless you’ve opted for a trip to Iceland, most vacation spots usually involve a beach, some place warm, and if you’re smart, an all inclusive package where you can drink as much as you want. Because this is the case, what Berdychevsky and her team of researchers found, in addition to alcohol, is that the more revealing the clothes, the more sexually confident a woman will become. Sexual confidence, whether that's achieved by wearing a lot of clothes or no clothes, just naturally leads to upping your sexual prowess game.

2. One Third Of Americans Think Sex Is Hotter When The Weather Is Hotter

If the summer is anything, it’s hot and muggy and ugh. But according to a 2012 study by Trojan Condoms, one third of Americans claim that when the temperature is high their sex life is even hotter. It also found that where it’s hot, as in effing sweltering, like Miami and Atlanta, sexual activity is higher than in other parts of country. The study found that people in Miami have sex about 102 times a year, while people in Minneapolis and Seattle only do it 64 and 75 times a year, respectively.

3. Summer Flings Are Good For Your Health

According to Medical Daily, summer flings are good for you in a handful of ways. Summer love teaches people about communication, because you have to talk about how this short-term love affair is going to end, of course, as well as how to sexually explore. Similarly to when a woman is on vacation, summer flings take people out of their day-to-day and make them more open to experimentation, both sexually and otherwise.

Summer flings also give people a sense of what they really want in a person. It may be one thing to date the emotionally unavailable musician for three months, but is that really something you want for the long-term? Probably not.

As LiveScience says, there at least seven songs with “Summer Love” in the title going back as far as 1957 and three films that also have the titles. In addition to the actual words “summer love" being used over and over, there are hundreds, if not thousands, of references to it in pop culture. (Grease, anyone?) And if we’re not a culture that’s severely influenced by pop culture, then really, what are we?

5. May Through August Are Big Breakup Months

Research of Facebook relationship statuses has found that for all age groups under 45, May through August has the highest amount of breakups compared to the rest of the year. The higher amount of singles out there leads to an increased number of summer flings, especially since the end of August the data shows that relationship statuses start swinging back the other way.

Why are summer and/or vacation flings all the rage? Well, sweat naturally. We already know that smelling a sweaty t-shirt can make a woman choose whom she’s best for, at least biologically speaking, but a team of researchers found that there are different types of gentlemen sweat that women can smell.

According to the research, everyday sweat and sweat from when a man is turned on activates different part of a woman's brain. What this breaks down to is that men sweat differently at work than when they’re out on there looking for summertime or vacation love, and women pick up on those pheromones... what's next is sexy times, of course.