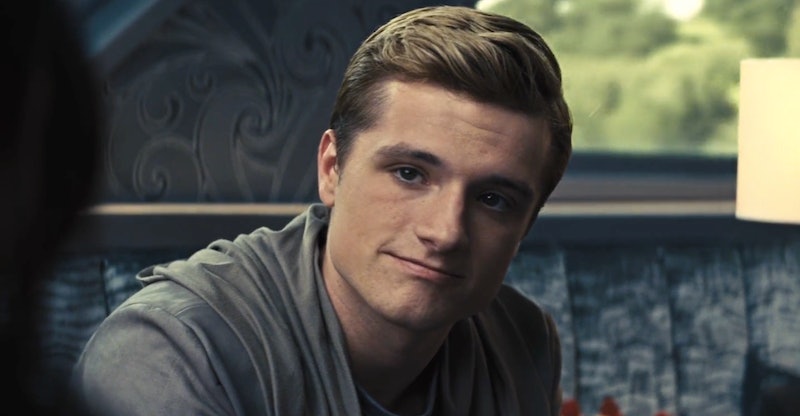 “Ladies and gentlemen, welcome to the 76th Annual Hunger Games.” Oh Finnick, were ten more bittersweet words ever uttered? After much hype and anticipation, not to mention an unbearably long break between movies — we finally have the Hunger Games: Mockingjay — Part 2 full trailer to feast our eyes on and it's even better than I thought it would be. There is a lot going on in this action packed trailer I almost don't even know where to begin. First we have the all out war, with Katniss going up against President Snow, then there's the fighting and epic battles, intermixed with a super sweet-looking wedding. All of these things are perfectly good options to obsess over but there is really only one thing I care about here: we finally get the real Peeta back in the final Hunger Games movie!

Look, I loved Mockingjay Part I, it was fast, fun and I will never get tired of watching Katniss kick ass (though it was sorely lacking in Johanna Mason). But for basically the entire freaking movie Peeta — sweet, wonderful, good Peeta — was stuck on the sidelines, brainwashed and held hostage in the Capital. He was largely reduced to a chess piece that turned around and stabbed us all in the heart when he went to kill Katniss. November 2014 was a tough time for #TeamPeeta.

So seeing him back on Team Katniss, working his way through the brainwashing and just generally not trying to kill anyone awesome? Kind of the preview highlight for me. Not only does he look significantly less unhinged, we see a flash of him and Katniss hugging — so hopefully this means the murder-phase is over. It looks like he is all-in on the war against Snow, he sounds resigned to death but ready to topple an empire. It's heavy stuff, and it is good.

Since this is the epic conclusion, that means we will also see some real resolution to the Gale/Katniss/Peeta triangle they've teased out over four movies. Just because I already know what the resolution is (unless they take a sharp turn from the books), doesn't mean I cannot look forward to some smooching. But no matter how that gets played out, it's still good to see them all marching off to battle together. Peeta was always best at grounding Katniss and helping her find what she needs to do and it looks like his back in fine pep talk form. His speech to Katniss is the background, giving the entire thing a motivational, driven feel.

I mean just look at this and tell me you don't have chills. Is it November yet?