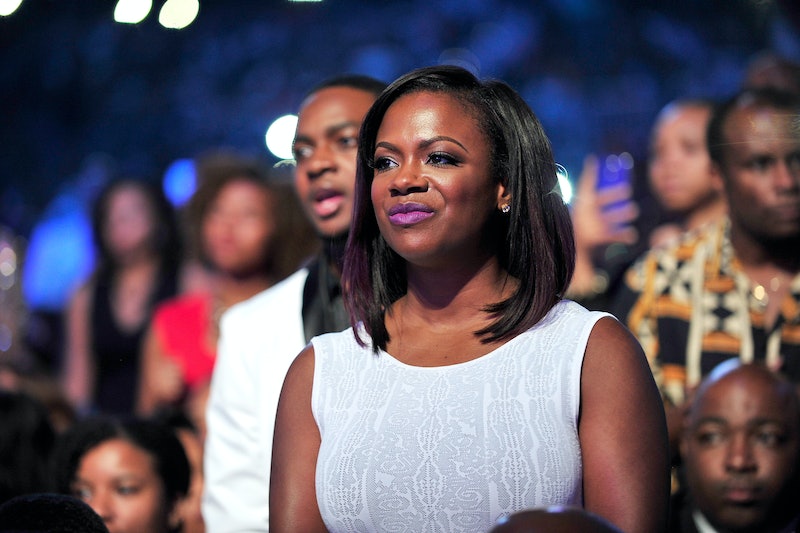 Having never been pregnant myself, I can only imagine that it is maybe the hardest thing anyone has ever done in their entire lives, especially if one is pregnant and a Real Housewives housewife at the same time. Amazing, sure. Miraculous, of course. But being in the spotlight and scrutinized while literally growing another human inside of you sounds terrifying, so in addition to being overjoyed at the news that Real Housewives of Atlanta star Kandi Burress is pregnant with her second child, I'm beginning to wonder if she might need some advice on being a pregnant Real Housewife. I mean, I spent one second thinking about everything that it must take to be a Real Housewife — hours of professional makeup, getting your hair perfectly blown out, interviewing in front of a green screen for ages, and fighting with your best friend in a satin dress and six inch heels — and then I pictured having to do that while pregnant and became instantly exhausted.

Of course, I’m super happy for Kandi and Todd. They’ve been trying for a while to bring their families together in anyway possible, and a new baby will certainly do that better than anything. And, even if being a pregnant Real Houswife will be tough, thankfully for Kandi, there are plenty of Real Housewives who have been pregnant over the course of the franchise’s run. Here's a few things she can definitely learn from their time on the series with child:

1. Don’t Lie About Your Due Date

If Kandi can learn anything from that time that Phaedra faked her baby’s due date to make it look like she and her husband hadn’t had premarital sex, it’s to be real — because a) there's nothing wrong with premarital sex resulting in a baby, and b) the lie will be the subject of way too much pointless drama.

I can’t imagine what that must feel like to be pregnant and hormonal and in the middle of a fight with a table full of women and have a bunch of cameras in your face. Either way, don’t pull a Kim Zolciak Biermann and let the drama get to you. Kim quit the show in the middle of a heated lunch with the ladies, and hasn’t returned since.

Bethenny went to St. Barth’s with the RHONY ladies during her first trimester and it wasn’t pretty. Having to live through Kelly Bensimon totally losing it halfway through the trip must have been all the more challenging without a little alcohol.

4. Don’t Get Into It At The Reunion

Remember the Season 1 reunion of the RHONJ ? You should, because both Teresa and Jacqueline were pregnant at the time. But, more importantly, it was the first and last time in their reunion-attending lives that they stayed relatively out of the firefight. Take a tip from them. Keep to yourself and keep well-hydrated. You’re going to need it.

No, really. Your feet will swell something fierce if you’re standing around at cocktails parties all the time, ESPECIALLY in heels. Vicki wasn't even pregnant, and she found that out the hard way.

Phaedra was forced to rest during the last trimester of her second pregnancy, but she was still filming from her bedroom, screaming into the phone and threatening violence to whoever was on the other end. So, feel free to film from the middle of your bed rest if you have to — just be sure to follow your doctor’s orders.

Of course, there's the possibility that Kandi timed this pregnant right, and won’t have to worry about being pregnant on air. Maybe she can even conveniently schedule a c-section on the day of the reunion shoot? It’s the perfect excuse: "Sorry, Andy. Can’t make it. Gotta go bring a new life into this mad, mad world."

Congrats to Kandi and Todd!