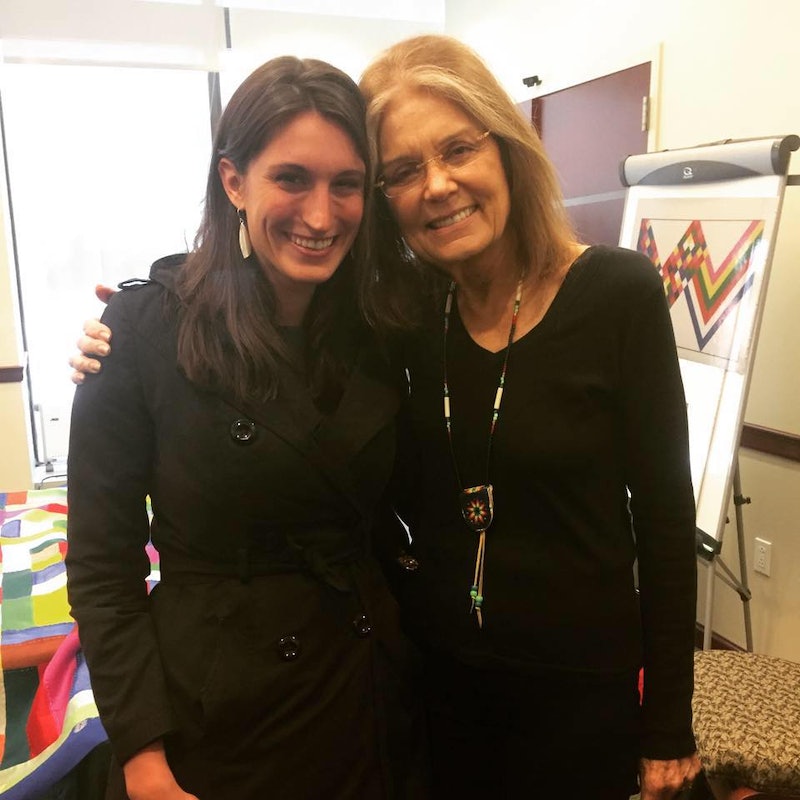 Everyone, on Monday I reached a milestone. Nope, I definitely already turned 21, and it basically ended in my taking an awkward tequila shot with my dad at a college bar while all my friends watched and cheered. No, this major life event had nothing to do with getting engaged, pre-engaged or anything to do with securing my life to someone else's. OK, let me give you a little hint: On Monday, I reached a feminist milestone. Any takers? No, it wasn't meeting Gloria Steinem (check and swoon) or anything that remotely has to do with feeling empowered as a woman and human being. Give up? OK. On Monday, I got my first-ever round of Twitter harassment! Somehow, I don't think Papa Weaver will want to toss back tequila with me over that one.

On Sunday, I wrote a piece for Bustle titled "The Worst States For Feminists Will Make You Cry Actual Tears For The Matriarchy." The story talked about which states were the most repressive for women and would make resident feminist activists enraged, should their licenses be registered under that state. I didn't necessarily state that feminists shouldn't move there. In fact, I believe that as many card-carrying feminists live in a regressive state, the better. The piece was meant to be fun and quippy, but also bitingly truthful. Some states, such as Wyoming and Texas, lack in both representation and in legislation that fosters women's health care. With this short list of anti-feminist states, I had hoped to unite feminists and get them to change those states to become places that are friendly to everyone.

On Monday morning, I woke up to see that Planned Parenthood had tweeted out my story; the nationwide women's health organization seemed to get my point. I favorited their nod to my work and moved on with my day. Later that day, I felt my phone vibrate as I surfaced from the subway; I had several other notifications from the Twitterverse, but they weren't nearly as supportive. Some were from anti-choice activists from the states I included who said things like, "Good. We don't want you here." I realized that maybe I should have explicitly stated that the last thing I want to do as a feminist is to run away from the problem. I felt as if my story had only given the Twitter trolls what they wanted: fodder to attack. I wondered how many more mean tweets were to come.

In the grand scheme of online harassment, it wasn't too bad — there weren't many expletives. There was the occasional "Planned Parenthood sells baby parts" tweet — an untrue claim that has been surfacing the Internet and media conversations lately. I was called a "baby-butchering Planned Parenthood supporter." Oh, and I was told to "get in the kitchen and make your man a sandwich." Yeah, that's not going to happen anytime soon, and for more than one reason. I rolled my eyes and scrolled down.

Then, I saw the tweets from other feminists who had read my piece and had a response. One, which has since been deleted, said something similar to, "That's right. See a problem and run far, far away." There was something about this tone of voice that made me click off my phone. In my eyes, I had been accused by another feminist of not saying the right thing, or saying it in the manner that he or she would have liked.

This realization made me think back a few months to the 2015 Academy Awards and Patricia Arquette's acceptance speech. The Boyhood actress made backstage comments that were thought to ignore intersectional social issues by saying that "it’s time for all the women in America and all the men that love women, and all the gay people, and all the people of color that we’ve all fought for to fight for us now.” Soon after, she received a barrage of criticism from feminist voices, despite statements that were likely meant to be progressive and feminist.

Suddenly, it seemed that Arquette's voice must have been the only one that mattered on these issues, because other feminists were parsing her every sentence. That week, we seemed divided into the categories of "Patricia Arquette" and "Feminists Who Know Better." I was disappointed in the feminist community then, and now I feel empathy for Arquette after experiencing just a fragment of the criticism aimed at her.

The tweets, retweets, and favorites now lie dormant in my Twitter feed, and I have only the lessons I learned from their initial arrival: In order to create change, feminists have to support each other. It's OK to see a tweet, a post, or a speech that doesn't sit right and to say something. In fact, you should. But it's most helpful to do so in a way that joins the feminist effort, instead of criticizing it for not being as perfectly feminist as you think is best. At the end of my monumental day, I received a tweet from another person that simply suggested another way to summarize my point and did so constructively, as if to help me add another layer to my article. I retweeted to join in the conversation and to show my approval.

Like this person did, we can give each other the nudge we need to continue to do better together and to make the change that needs to be made. If we work together and avoid Twitter harassment (let's leave that to the trolls — feminists, we've got better things to do), we can truly do amazing things. So, here is my promise: The next time that I see another feminist getting attacked online because of his or her opinion, I will flood that feminist's inbox with encouragement and support. Who's with me? Until then, see you somewhere in the Twitterverse.