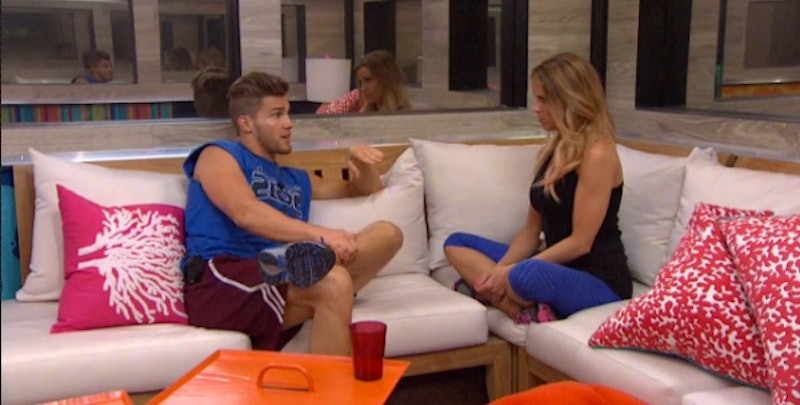 We’re almost five weeks into Big Brother 17 , and it’s just about time for things to start getting real. Many of the players who came in and talked a big game are gone, the house is clearly divided into two power factions, and The Sixth Sense keeps winning challenges and picking off their threats, one-by-one. With the fourth eviction slated to take place tonight, it’s about time that the housemates start getting real about the final four. Because, by now, I have a pretty good sense of who these people are and how they play the game — and I've realized there are housemates whose game I totally respect and housemates whose game I definitely do not. A perfect example? Clay and Shelli.

These two couldn’t be farther apart on my fandom scale. Shelli has proven herself to be an impeccable player, winning challenges, making the right friends, and playing the sweet card when she has to in order to get into people’s good graces. Clay, on the other hand? I can’t think of one good thing that guy has done in the house besides ride Shelli’s coattails. I mean, starting a showmance with her didn’t take any serious skill — the guy is ridiculously good looking, so getting girls to fall in love with him is probably the easiest thing ever.

However, Clay has never won a challenge, has never been HoH, and has never once offered a shred of strategy that has been in any way helpful to himself or his alliance. Shelli would be way better off without him.

If anything, the guy is a ticking time bomb. He gets way too emotional in front of the other players. Remember that time he went off on Da’Vonne and made her cry? Or, what about when he turned his conversation with Audrey and Shelli into a legitimate fight that required mediation, when all she was looking for from him was reassurance? This guy is seriously incapable of thinking with a clear head.

Even Shelli seems to see it. She said to him in one of the first weeks that he does way too much of the talking. “You have to listen more than you speak,” she told him, reminding him that he was giving away too much information and not getting enough in return when he was the one doing all the talking. So, why isn’t she kicking him to the curb?

I have to think it’s because she knows she has a good thing going right now with The Sixth Sense — but I have my fingers and toes crossed that she will cut him loose when the time is right. Until then, I’m hoping she does it sooner rather than later.

More like this
When Was 'Bling Empire' Season 2 Filmed?
By Alyssa Lapid
Kourtney & Travis Crashed His Daughter’s TikTok Live In Their 2nd Wedding Outfits
By Grace Wehniainen
There's One Big Reason Bru & Alyssa Aren't Dating After 'The Circle'
By Gretchen Smail
Everything To Know About 'RHONJ' Season 13
By Brad Witter
Get Even More From Bustle — Sign Up For The Newsletter