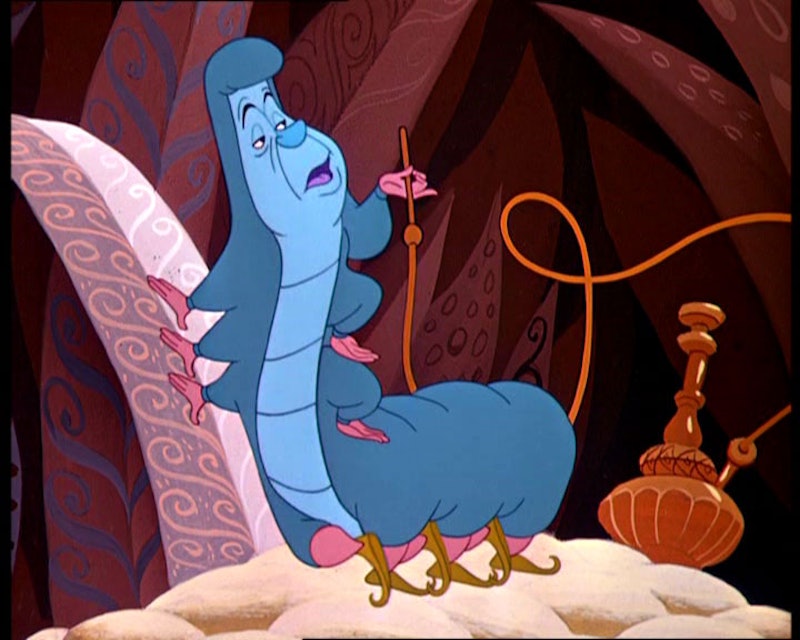 Disney movies are quite simply a childhood staple. It's hard to imagine growing up without Mickey Mouse, Belle, Ariel, or Simba since I planted myself firmly in front of the TV and watched VHS tapes until they wore out. Disney movies have also grown up with me. As I marched through my early adulthood, I also found myself riding Pixar wave. My lifelong relationship with Disney movies might also explain why I have such a twisted sense of humor. Disney movies are chock full of adult humor — and it's not just the phallic drawings on the cover of The Little Mermaid . Disney's grown up references range from Cars advertising a bar where all the waitresses are "convertibles" to having beloved characters do drugs. Yep, Disney movies have just as many drug jokes as they do sex and poop jokes.

Some of Disney's "controlled substances" are pretty innocent, while others are actually kind of horrifying when you consider the circumstances. (Lest we forget that Snow White is a term for cocaine. Though, at the time, I sincerely doubt Walt saw the cartoon going in that direction.) Nevertheless, drugs and Disney go together like singing woodland creatures and Disney. These seven examples will really make you wonder how this stuff ever made it into children's programming.

There are a lot of drugs happening in Alice in Wonderland, but the most egregious examples are the magical mushrooms and the caterpillar who is hitting that bong hard.

I guess Disney was pretty liberal in 1951. This movie is a drug trip from start to finish.

I've known cigars to make you turn green and see the world in a wobbly, woozy way. It looks a lot more like a, um, greener "cigar" if you ask me.

First Dumbo and Timothy Q. Mouse get drunk on "champagne" and then this happens...

The stuff that childhood nightmares and bad acid trips are made of.

Cough syrup that tastes different to everyone who drinks it? I'm so sure, Mary.

Mickey Mouse just got rolled in a blunt by a Giant, y'all.

Fillmore, the Volkswagon bus is a total hippie. When stopped at a traffic light Fillmore looks to Sarge and says, "I'm telling you, man, every third blink is slower." To which Sarge replies, "The sixties weren't good to you, were they?"

This scene has been particularly controversial over the years for its racist portrayal of Native Americans...it also happens to feature the tribe and the kids smoking a peace pipe.

The Alice in Wonderland drug references come as less of a surprise, but Peter Pan and Pinocchio were pretty shocking. I guess some people may find it funny to see their beloved childhood cartoon characters get high, but I mostly find it disheartening. I'm just grateful there was never a moment in the Up memory book where Carl and Ellie go on a bender. Thanks for saving me that much, Disney.