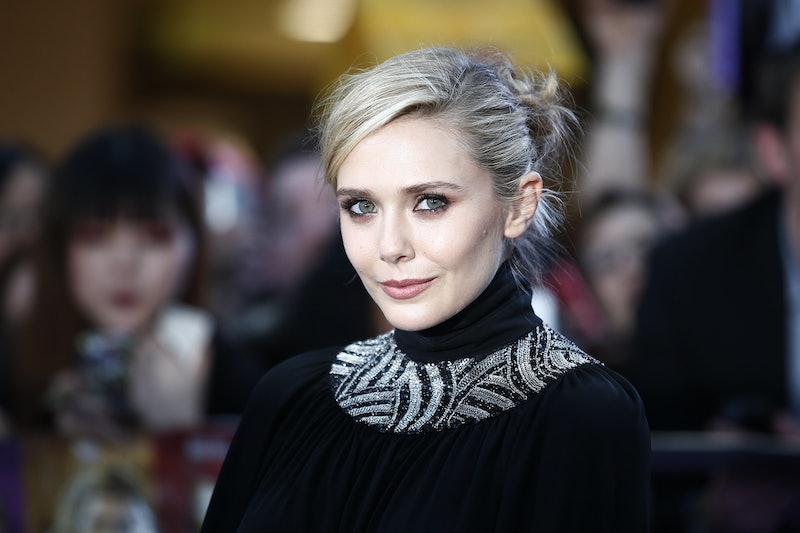 The alleged, amazing news that Elizabeth Olsen and Tom Hiddleston are allegedly dating shook up both Twitter and the Marvel Cinematic Universe. If you haven't heard the rumors, here's the gist: Olsen and Hiddleston were recently spotted have a private dinner date at The Wolseley restaurant in London, before catching a cab, and the photo evidence of their night out only added fuel to an already raging fire of rumors surrounding their relationship status. Considering the duo play Scarlet Witch and Loki in the MCU — two characters on opposite sides of good and evil — it's strange to see them together, but I have to say, they do make an adorable couple.

Now that this couple might actually be a real thing — Olsiddleston? Tomibeth? — I will admit I'm curious about what Olsen's older sisters, Mary Kate and Ashley, think. Hopefully, the child stars-turned-fashion icons would be happy as long as Olsen's happy, and I mean... who wouldn't be happy with Hiddleston? Even more-so than that, though I'm wondering how Mary Kate and Ashley's Full House alter-ego would react to Olsen's potential new relationship, though.

Even Though Tom Is A Perfect Gentleman, She'd Be Skeptical Of His Intentions

Side-note: Way to match the bow with the sweater, Michelle.

But When She Sees How Happy Elizabeth Is, And That Hiddles Means Well, She'll Hop On Board

How could you not love the Hiddles?

And When Tom Asks Her If She Approves, She'll Say...

But, she'll still keep a healthy skepticism to make sure Elizabeth doesn't get hurt.

But as they keep dating, Michelle will see how lovey-dovey they get, and think it looks ridiculous.

Michelle Won't Be Afraid To Make Fun Of The Couple

But she'll remember that she has loves in her life that make her mushy as well.

But She Knows What Love Does To A Person

Another side-note: Officially the cutest GIF on the Internet.

She'll Start Celebrating Their Love And Practice Dances For The Wedding

If only Michelle were real, and frozen in time, so her cuteness could be applied to every modern situation.

Now... if only we could get confirmation on these Olsen/Hiddleston rumors! ... Anyone? Bueller? Bueller?