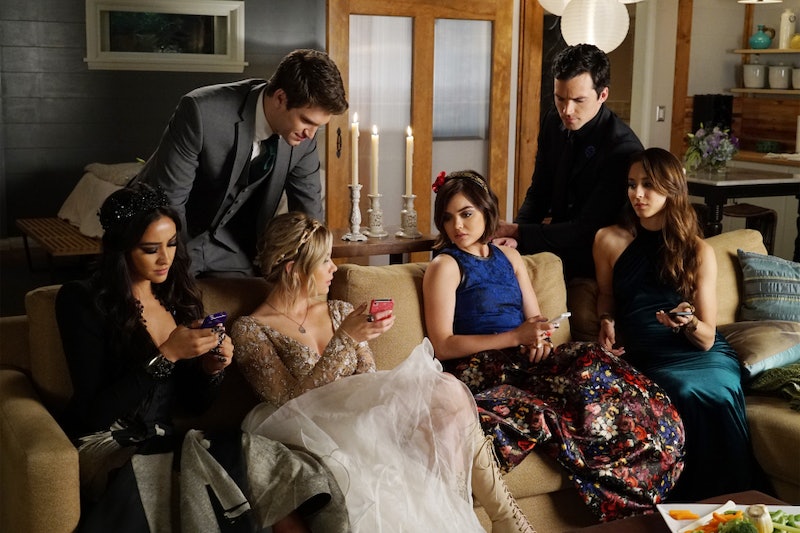 If I had a nickel for every single Pretty Little Liars theory I've heard throughout the years, then there's a fairly good chance that I'd have as much money as Oprah. OK, so maybe that's overstating it a little, but my point is that fan obsession with PLL has reached an all-time high and everyone is desperate to uncover the show's many, many secrets. And while some predictions are a little too out there to be all that realistic, there are some PLL theories on Twitter and Instagram that I've found to be extremely insightful. I mean, it's truly amazing what some viewers are able to come up with and piece together about this rather complex storyline.

From Bethany Young's connection to Charles to whether or not Wren is truly A, these fans don't need a Summer of Answers to know what's going on. They've already figured it out… or at least think that they have. Either way, though, I've found many of them to be fascinating reads. Plus, it's always good to add a few extra observations into your already loaded arsenal of A knowledge, which is why I've taken the time to round up some of the best theories I've come across on both of these social media platforms that's guaranteed to make you obsess over this series even more. (If that's even possible.)

1. Melissa Hastings Is The Black Widow

Though many are under the impression that Ashley Marin is the mysterious woman in black, this theory helps prove that there's an equal (if not greater) chance that Spencer's sister Melissa is the lady in question. She knew Wilden, so it would make sense that she'd show up at his funeral — which Melissa just so happened to be MIA for, BTW. Plus, the title kinda fits her perfectly. She is a widow at this point, after all.

Hey, remember back in Season 5 when Aria was innocently checking email? Well, what you may not have noticed was that one of those messages was from someone named Harvey D., who wanted to go over details regarding the fence project they'd been discussing. That might not have meant much to us back then, but in light of the recent electric fence that fully enclosed the dollhouse bunker and prevented the Liars from escaping, this little message here now carries some rather shocking weight. (Pun intended.) If you didn't already think Aria was playing for the A Team, you do now.

3. Maya Is Alive & The Voice In The Dollhouse Bunker

There's been a lot of talk lately about the possibility of Maya still being alive. What if she too was in the bunker right under the Liars' noses? Some fans are confident that it was even Maya's voice that we heard over the loud speaker, instructing the Liars of what to do and where to go. But would this mean that Maya is working for Charles or simply another one of his victims being forced to do his bidding? Right now it's still hard to say, though, it does bring me to the next theory…

If you recall, the Liars found a message in Mona's dollhouse bedroom. Naturally, they assumed that the "M" at the end of the message stood for Mona (it was her room, after all), there's also a chance that it was from another character who's missing and name starts with M — like Maya!

5. Aria Was A Patient At Radley

Not only would this help explain why Eddie Lamb thought she looked so familiar, but it would also shed some light on the whole Iceland trip. Perhaps that was just a scapegoat the Montgomerys used to help explain Aria's absence. We know her family has a history of mental illness (i.e. Byron's brother), so who's to say Aria hasn't acquired a similar prognosis? It's also possible that she's developed multiple personalities and is therefore completely unaware of the things she's been doing.

PLL always did love a good fake out, which is what would make this little switcheroo so perfect. Sara is definitely a shady character, who knows way more than she's letting on. What if she and Charles are in on this whole thing together and pretending to be Sara is her way of infiltrating the Liars from the inside out?

They do look awfully similar, which could mean a few different things. Either Colin is Charles and Freddy was just a name Mrs. D used to help hide her son's identity OR Charles and Freddy are two different people. Perhaps Freddy is even the "ally" who wrote him that birthday message. And if Charles is Wren like so many people believe, then it would make sense that his flatmate ("Freddy") would be in on the whole thing with him.

We still have so much to uncover about Charles' past, but it's entirely possible that, while at Radley, he found solace with one of his doctors (Dr. Sullivan), who eventually went on to adopt him after feeling as though his real mother had abandoned him. Maybe that's why Charles was so against the Liars mentioning his name to Dr. Sullivan during therapy. He may not want mommy dearest to know everything that he's been up to lately.

For more PLL and Charles theories, check out Bustle's latest podcast below: