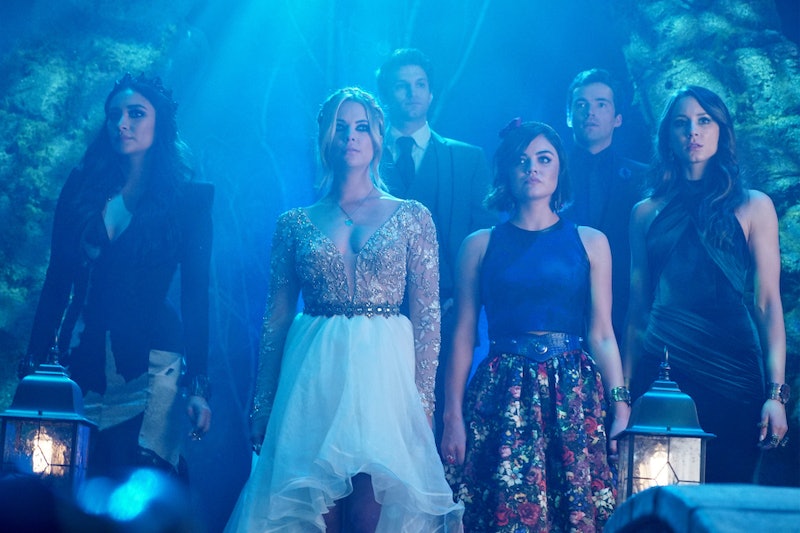 Everyone stop what they are doing right now because we have a serious PLL emergency on our hands. Caleb is missing from the Pretty Little Liars prom pictures and I am so not OK with it. Why would I. Marlene King do this to us? So not only do we still not know who Charles is, but now we're potentially getting deprived of seeing Caleb in a suit? Have we not been through enough? This is by far the cruelest twist this series has played on us yet. Of course, there's always a chance that Caleb does attend prom and the writers simply left him out of the photos to throw us off. (And if so, mission accomplished.) But after spending years obsessing over PLL , it's left me rather paranoid and prepared for assuming the worst.

So let's just for argument's sake assume that Caleb is officially MIA from this pivotal event. What possible reason could there be for his absence? Prom is considered to be a rite of passage for many high school students. There would have to be a very good reason for Caleb to miss out on such a monumental experience with Hanna. (Something tells me he'd have some pretty sweet moves out on the dance floor.) And yet, he is nowhere to be found. Why? Unfortunately, we still have a few excruciating weeks to go before this episode, titled "Last Dance," airs. So, in the meantime, let's try to run down a list of excuses that would help explain Caleb's mysterious disappearance.

Haleb Is Still On The Outs

As much as I enjoyed watching that steamy scene between the two of them a few weeks back, that doesn't necessarily mean they're automatically back to the way things once were. Perhaps Hanna is still in need of some space and didn't actually ask him to go with her. It'd be a terrible mistake on her part, but that doesn't make it any less of a possibility.

He's Busy Concocting His Own "Catch A" Plan

We all know how A feels about proms at this point, so I'm betting this is one event he won't be able to resist attending. Right now it's unclear whether or not this guy show in the image above is supposed to be Charles/A (he's listed as being actor Justin Fix) or simply another mysterious character in this whole A backstory. (Freddy, is that you???) Either way, though, A is going to be somehow involved, which may leave Caleb a bit too preoccupied to have time for things like a high school dance.

A Is Holding Him Prisoner

I hate to even suggest this, but it's also entirely possible that Caleb is unable to attend prom because he's found himself trapped in A's clutches. A knows all too well how much Caleb means to Hanna and the rest of the Liars, which means he can be used for leverage in whatever twisted new mind game A has in store. Or — and I hate myself for even thinking this — he's met a much more grim fate by A's hand by either suffering from a severe injury or even (gulp) death. I really hope I'm wrong about this one, guys…

There's no denying that The Carissimi Group is super shady and somehow connected to Charles and the DiLaurentis family. Caleb might be putting those amazing hacker abilities to good use by researching as much as he can about Hanna's too-good-to-be-true scholarship. And while I'm sad that this little project would deprive us of some top-notch Caleb swooning, at least we'd know he was safe.

He Didn't Want To Upstage All The Other Guys

Then again, perhaps he just didn't want to steal the spotlight from all the other PLL men and their formal attire. Because, let's be honest here, he TOTALLY would.

I want you to know how much it pained me to even write such a thing, but whenever someone is MIA for no logical reason, you can't help but wonder if they're off doing A-type things. Granted, I personally am convinced that Caleb should not be on our A radar, but I'd be remiss if I didn't at least throw the idea out there. Now let's just move on and pretend like this never happened.

For more PLL and Charles theories, check out Bustle's latest podcast below: