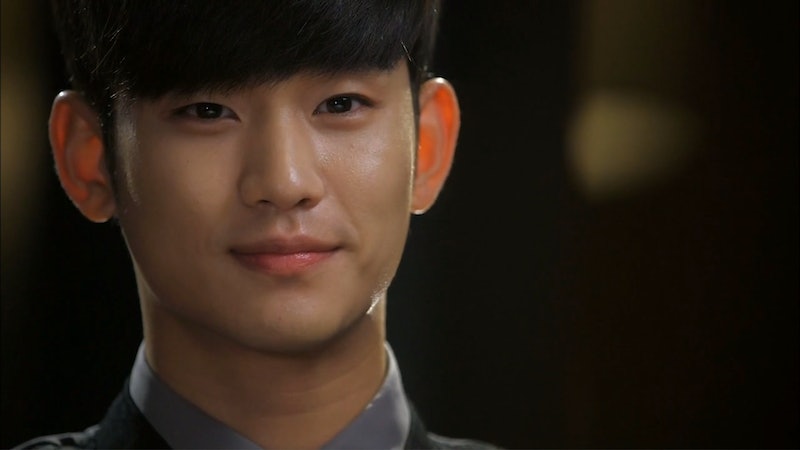 If you've watched the astronomically popular Korean drama My Love From Another Star , you've probably realized that Do Min Joon (who happens to be portrayed by the dreamy Kim So Hyun) is basically the end-all, be-all when it comes to boyfriends. I mean, aside from the fact that he has the non-aging skin of an already genetically-blessed 25 year-old, he also happens to be ultra-smart, he's basically a superhero, and above all? He's seriously head-over-heels (like, write angry diary entries-level smitten) for Cheon Song Yi.

No K-drama is complete without a preternaturally compelling love story — but the supernatural element (not to mention Cheon Song Yi's career as a top hallyu star, and the billionaire heir determined to kill her) makes My Love From Another Star particularly spectacular. Besides, as far as tropes go, is there really anything better than a super-powered boyfriend? Off the top of my head, in addition to Do Min Joon, there's Daredevil's Matt Murdock, Doctor Who's The Doctor, Star Trek's Spock, Thor's Thor... and, yes, Twilight's Edward Cullen — and all five (or four, if you're morally opposed to Twilight) are each romantic catches in their own right. So, with that in mind, here are 9 reasons you should be on the hunt for an alien boyfriend.

Especially when a hitman has drugged you, and placed you in a brakeless car rolling down a hill towards a cliff.

Yeah, the ability to literally stop time is pretty darn romantic (and useful).

Especially if he hears you crying about pain in the lower right quadrant of your stomach in the middle of the night, and is able to diagnose you with appendicitis on the spot.

4. ...And Teleportation Is Basically The Best

How cool would it be to travel to beautiful locales with little more effort than a snap of the fingers?

5. You May Have Met Them In A Past Life

The fact that Jun Ji Hyun and Do Min Joon had already met in another life only added an extra level of true love to their saga.

Or hey, maybe you've even met them in multiple lives:

6. You Might Get To Visit Their (Awesome) Home Planet

Asgard has its risks, sure, but there's no denying the fact that it's quite the destination.

7. (And You Might Meet Your Annoying Future In-Laws In the Process)

A slap in the face is a relatively small price to pay for a failed attempt at world domination, when you think about it.

8. They Still Have On-Point Personal Style, Even After Going Through A Worm Hole

Yeah, Do Min Joon somehow managed to keep things quite classy during his years of being trapped in a wormhole (it's kind of a long story).

9. If They're Centuries Old, They Might Have Picked Up Some Cool Tricks Over The Years

...And triage skills to save your life, for when the occasional serial murderer tries to poison you...

...Not to mention a law degree, to keep you from going bankrupt.

What do you think? Convinced that alien boyfriends are the way to go?

Images: My Love From Another Star/DramaFever (11); Giphy (7)