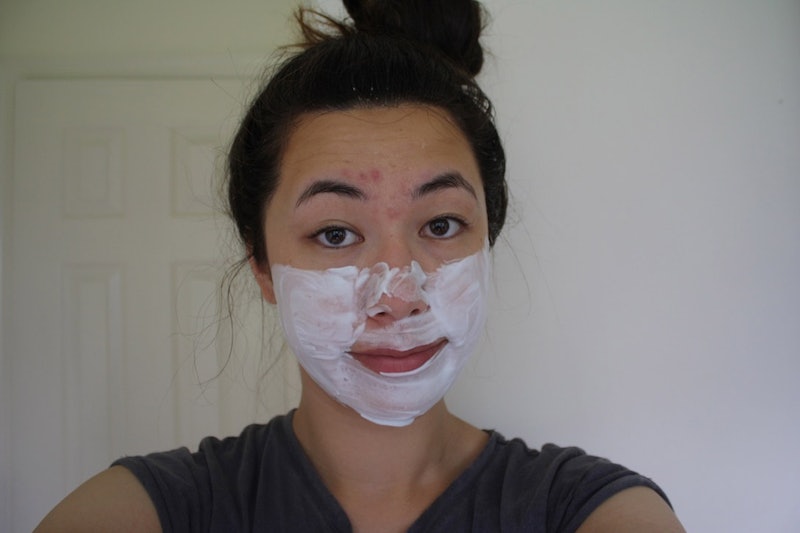 When I asked my dad to explain his skincare routine to me so I could replicate it for a week, he actually laughed and asked, "What skincare routine?" Although my dad is my style icon and can rock a Patagonia pullover better than anyone else I know, he doesn't know much about beauty, and his skin routine is pretty simple.

"I shower every morning, because I have fairly oily skin," he explained. In the shower, he washes his face with soap to help manage the oil. It can't be any soap, however. "I only use Tone," he noted. The only other major part of his routine is shaving, the frequency of which varies depending on the season. In the winter, he shaves "whenever." But in the summertime, when it's hot and humid, he shaves every other day. My dad's oily skin means he gets pimples sometimes, and if it's big and bad and red enough, he'll apply a bit of salicylic acid gel. He also puts on sunscreen before heading out to run errands because he's pretty pale and burns quickly.

That's basically it! For me, there was something really appealing about trying out a regimen that was so simple, especially since my own skincare routine is complicated. I was most nervous about the idea of shaving my face, but was quickly reassured by a Google search. Apparently, skincare experts like Kate Somerville maintain that shaving your face helps with exfoliation. It's one of those weird tricks that some women swear by, so would it work for me? I figured I had little to lose, so here's what happened when I threw out my skincare regimen and tried out my dad's routine for a week.

For a week, I would follow my dad's skincare routine, using only the products that he uses. I know these are the actual products he uses because I literally stole from his bathroom (Sorry, Dad). I would take a shower and wash my face with soap every morning, and shave my face every other day. I would follow up with sunscreen and a salicylic acid spot treatment that my dad also uses sometimes. I would not wear makeup, because my dad doesn't wear makeup. Voilà!

When I started this experiment, I had a two huge breakouts -- one on my chin and one in the middle of my forehead. I knew that most of my week would be spent trying to manage these, but it was a little stressful to know I wouldn't be able to use my usual products. I woke up on the first day, hopped in the shower, and used the soap to wash my face.

I don't love washing my face with regular soap because it usually feels dry afterward, but since my skin was so oily due to the breakouts, it felt pretty refreshing. It felt like my skin needed to be dried out a bit. There was also something really satisfying about being done with my entire beauty routine after showering. It was simple, and I was able to get on with my day.

When I woke up on the second day, the two breakouts were still raging on my face. This was my first day of shaving, so I was really worried that I would either nick my face or make the zits on my chin worse.

Now, I've been shaving my legs and armpits for many, many years, but have never once experimented with shaving my face because I've always assumed my face was hairless. Well, I was wrong. Tons of fuzz ended up in the razor, which I guess makes sense, but it still threw me for a loop. I was also pretty pleased that I didn't cut my face.

After shaving, my skin felt smooth but dry. I immediately put on some sunscreen as a moisturizer, which was a big mistake, because it burned. (Imagine that scene from Home Alone when Kevin puts on aftershave and doesn't know what it is. I was Macaulay Culkin.) What impressed me the most, however, was how the redness on my chin seemed to calm down after shaving. I also couldn't stop touching my cheeks because they felt so smooth and supple. Instead of irritating my face as I expected, shaving calmed it down, eliminated dead skin, and made it softer than I thought was possible.

On the third day, the breakout on my chin was definitely calmer, while the zits on my forehead were getting worse, which led me to believe the shaving actually had a positive impact on my skin. I showered and washed my face with soap, followed by sunscreen a couple of hours later. Before going to bed, I put some of the salicylic acid spot treatment on my forehead, hoping it would be better in the morning.

There was a little more improvement on the fourth day, and washing my face with soap got rid of some of the oil that had built up on my forehead overnight. Again, it wasn't revolutionary by any means, but it was nice. I was also excited to shave again, given the success of my first experience.

Unfortunately, shaving was not as smooth, successful, or satisfying on the second day. It felt like I was dragging the blades across already-dry skin, and instead of exfoliating the zits on my chin, it just turned them red. There was nothing left to exfoliate, and my skin became irritated.

Feeling defeated, and learning from past mistakes, I waited a bit before slathering on some sunscreen, but that only seemed to exacerbate a lot of the irritation. The acne on my forehead was getting worse as well, so I ended up popping the zit before going to sleep (which is always a huge mistake).

Despite the failure with shaving the day before, I saw a little bit of improvement on my chin. But it didn't seem to be tied to anything except time passing. My skin was dry, and washing with soap only dried it out more. Plus, the popped zit on my forehead just looked bad. It was not my finest day, and I was glad I didn't have to shave and risk drying out my skin.

The scab on my forehead started to heal, and the acne on my chin was the calmest it had been all week. It still felt delicate, though -- like I had only started to find a balance between managing the oil from the breakouts and the dryness from shaving. So shaving on the sixth day was more nerve-racking, and way less fun or effective.

I woke up on the seventh day with the clearest skin yet. I took a shower, washed my face with Tone soap, and was ready to head out the door in under 20 minutes. Say what you will about this routine, but the efficiency really couldn't be beat.

So Does Dad Know What He's Doing?

My dad's skincare "routine" isn't really a routine as much as a set of general cleanliness and hygiene tips, and I wouldn't really say that they "worked" for me. Stopping use of all of my regular skincare and beauty products was a great weeklong detox, though, and I think I might try to let my skin breathe more often.

The one part of his routine I'll be taking along with me is shaving, and though I don't think I'll be shaving my face every other day, it's a trick I'm glad I now have in my arsenal for when I want some deep exfoliation without worrying about polluting the waterways with microbeads. It seems weird, but it worked for me, and I think that's my biggest takeaway from this weeklong experiment. My dad's simple skincare routine is what works for him, so he sticks with it. Finding your formula (whatever it looks like) and being consistent with it is a great lesson.

More like this
The Friends Of Glossier Summer Sale Is Back
By Tomi Otekunrin
Charlotte Tilbury Just Launched A Royal Collection To Mark The Queen’s Platinum Jubilee
By Tomi Otekunrin
What To Know About Brow Microshading Vs. Microblading
By Danielle Sinay
21 AAPI-Owned Beauty Brands That Will Be Your New Favorites
By Audrey Noble
Get Even More From Bustle — Sign Up For The Newsletter