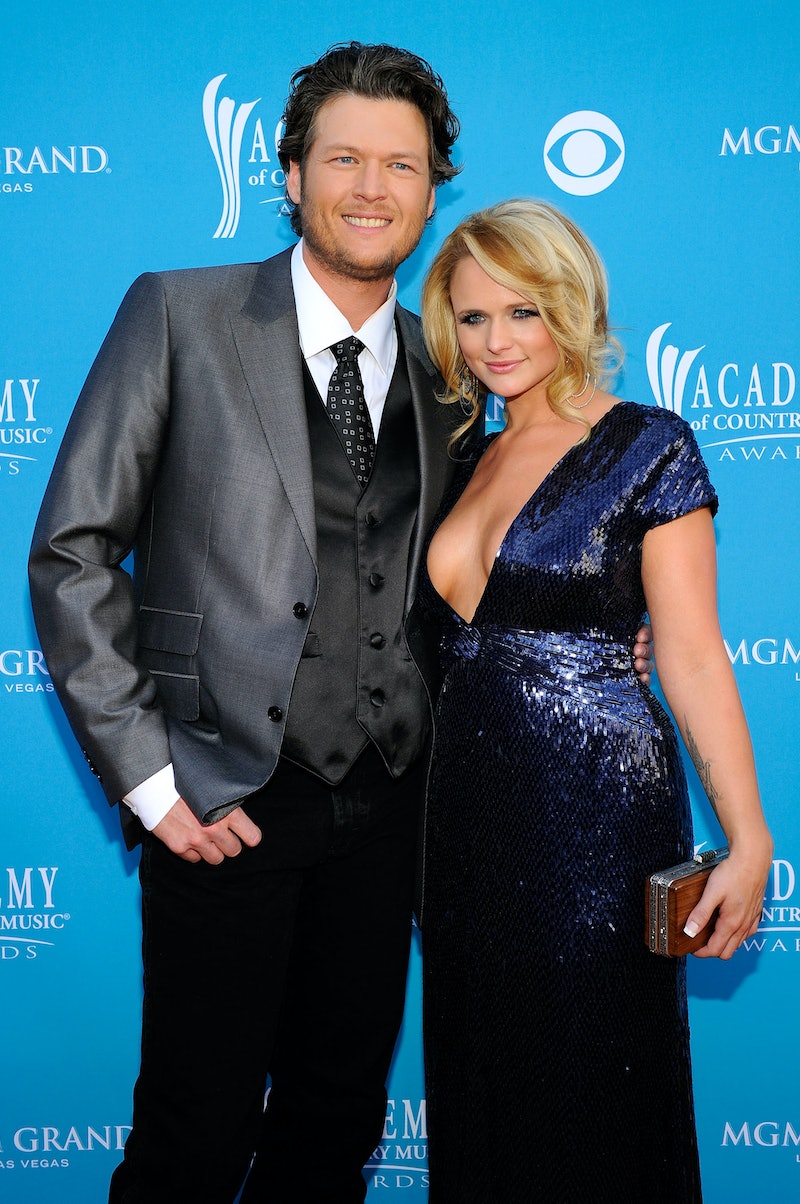 I'm calling it now, because after seeing this, it's truly official: Blake Shelton and Miranda Lambert are the friendliest exes ever. While the recently announced separation of the country power couple was sad news to many, Shelton and Lambert's recent tweets offer hope that divorce can be friendly: Specifically, by tweeting at each other in a surprisingly friendly, casual way in the days following the announcement of their divorce.

So, what went down? On Friday, Shelton tweeted at Lambert praising singer Ashley Monroe's new album, and, after a brief silence, Lambert tweeted back in agreement, and encouraged their fans to check it out. When one fan theorized that the tweets were pre-scheduled before the divorce was announced (such thing has happened before, albeit with different public figures), Shelton responded with a "Nope.. Not at all buddy."

While Shelton had been actively posting on Twitter since the sad announcement, Lambert had remained mostly silent — until Friday. After her cute conversation with Shelton, she posted a photo of him with a stroller, making a joke about him being pregnant. (Shelton later retweeted and played along with it.)

While some fans seem confused by their public friendliness, I think it sets a good example for the possibilities of divorce. Though I understand that everyone's circumstances and personal relationships are different, I think it's great that Shelton and Lambert seem to be handling this situation maturely and with as much positivity as possible.

While Shelton and Lambert might be the friendliest exes in Hollywood at the moment, they're not the only ex-couple who's remained on good terms after a split: Here are some other celebrities who have shown that they are pretty good friends post-breakup.

Despite an unfortunate breakup over the phone, Jonas and Swift apparently go on double dates together, but with their new partners. They're like the definition of that one Gwen Stefani song!

Whatever "conspicuous uncoupling" is, Martin and Paltrow seem to have mastered it. The couple does stuff like go on "divorce vacations" and get brunch.

Miranda Kerr and Orlando Bloom hang out so often that they've started rumors that they're back together.

Their daughter Zoë has maintained that they are a great divorced couple, and they publicly spend time with her together.

The two starred in Bad Teacher together after their breakup, and they're still good friends.

The two exes do cute stuff like get breakfast together.

Honestly, with friendships like that, it's hard not to ship all of these couples anymore — but there's something to be said about a couple managing to handle their break-up with grace while also deeply embedded in the public eye.