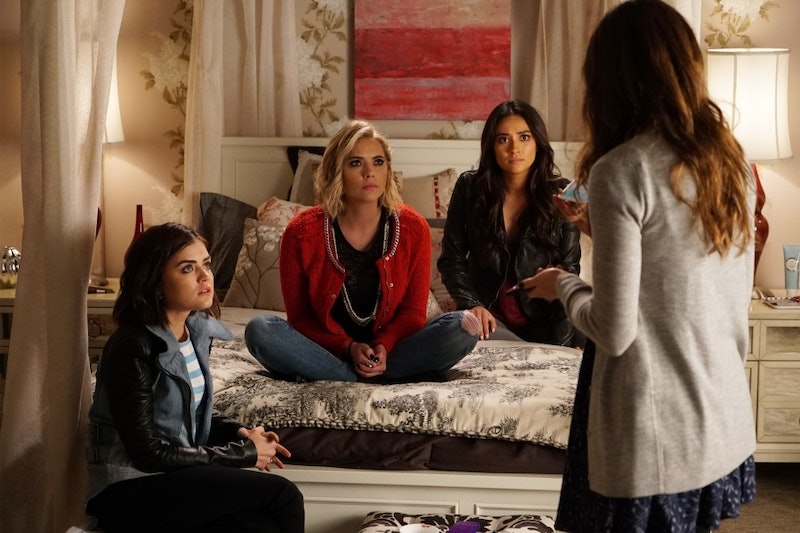 Very few TV shows have the ability to take over fans' lives the way Pretty Little Liars can. When we're not playing the roles of armchair detectives as we try to decipher every single clue, we're trying to decide which Liar is our kindred spirit. Personally, I often get to the point where I've read so many Pretty Little Liars Charles theories that my head is spinning and I just don't know who or what to believe anymore. When this happens, my solution is a simple and effective one: I switch over to the Tumblr pages that are dedicated solely to emulating the Liars' wardrobes. (You thought I was going to say something practical like "I go for a run" or "I call my family." didn't you?)

Over the past six seasons, we've grown very attached to Aria, Emily, Hanna, and Spencer and their struggles have become our own. Sure, when we receive a text it tends to be from a friend or parent, not A, but that doesn't mean we're not just as committed to stopping A as they are. Here are eight ways fans are basically living parallel lives to Aria, Emily, Hanna, and Spencer, because Pretty Little Liars has totally taken over our lives.

1. We Are On An Endless Quest To Figure Out A's Identity

The Liars won't get their lives back until they figure out A's identity once and for all. And frankly, neither will the rest of us. Granted, they exert considerable physical effort as they search for clues — traveling all over the state, running through the woods, and putting themselves at considerable risk. The rest of us are just armchair detectives prowling Tumblr for clues, but we are just as invested as the Liars.

2. We Live In A State Of Constant Confusion

Like the Liars, we're consistently confused — either because we're obsessing over that crazy unforeseen twist in last week's episode, or because we've forgotten to pay attention to everything going around us due to the aforementioned obsessing. Sorry, were you talking to me for the past five minutes? I wasn't ignoring you, I was just having an epiphany about who might possibly be Uber A. Thanks for your understanding!

3. We Have Major Trust Issues

If I'd been warned that a side effect of watching Pretty Little Liars would mean feeling suspicious of every new person I meet... I would have become a superfan anyway, because every wonderful thing in life comes at some cost.

4. We Are In Love With Caleb

When Hanna fell in love with Caleb, so did pretty much every Pretty Little Liars viewer. He may be on her last nerve right now, but this 'ship will be endgame or else...

5. We Have No Patience For Lesli

Lesli, please take your fake glasses and go back to wherever you came from. Heck, go back to Radley and crash there if you must, because apparently they failed to secure the premises when it was shut down.

Caleb abruptly up and left for Ravenswood, then reappeared without much of an explanation, because these things sometimes happen when a spinoff series fails. Since then, we've done our best to pretend this awful thing never happened — and so have the Liars, because it's barely been spoken of since. And really, it's in everyone's best interest.

7. We Can't Decide Whether Or Not Ali Should Be Trusted

We want so badly to trust her and believe she's changed her ways, we really do! And we so appreciate what she did for us (uh... I meant to say what she did for Aria, Emily, Hanna, and Spencer). But she's been super manipulative in the past and if there's one thing we've learned from Pretty Little Liars, it's that no one can ever be completely trusted.

8. We Speak In Witty One-Liners

Another side effect of watching Pretty Little Liars is that we've learned how to form the best comebacks and one-liners in a matter of moments. And OK, I'll admit that sometimes we just quote Spencer or Hanna verbatim, because we have all the best dialogue from the show memorized anyway. To let Pretty Little Liars take over your life even more, check out Bustle's podcast Taking This One To The Grave.