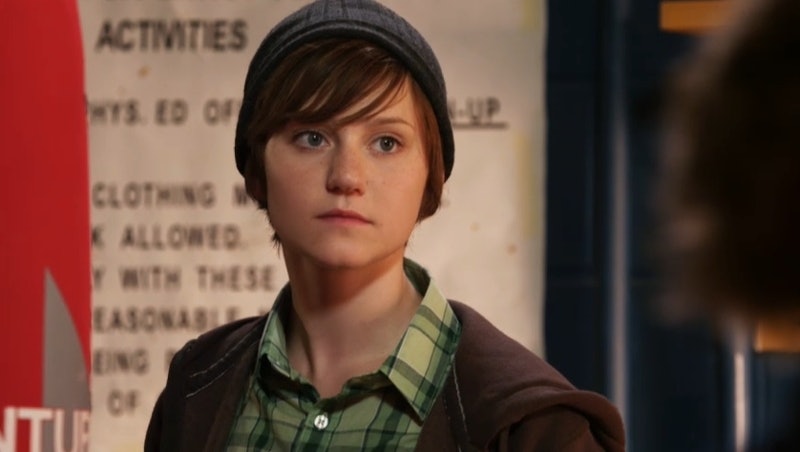 Like many people now in their early to mid-twenties, I grew up with Degrassi . I was barely a tween when the series premiered on TeenNick in 2001, and to say that it taught me a lot about what I was in for as a teenager would be an understatement. Degrassi's brand of educational entertainment really resonated with me — as it did with countless other fans — and though the show has been on the air for 14 years, it's still one of the few programs that gets teenagers mostly right. Never a show to shy away from difficult subjects, Degrassi succeeds by never sensationalizing or exploiting teen issues. After 14 seasons on TeenNick — with at least one more headed our way on Netflix after TeenNick cancelled the series this summer — it is still creating a platform where some of the most important issues facing teens can be discussed openly and realistically.

Fans can thank Degrassi for creating progressive programming that wasn't afraid to show teens at their most vulnerable or in situations that might make their audience uncomfortable. As any teen knows, high school isn't always pretty — but that doesn't mean that we should keep the very unpretty things that can happen under wraps. By shining a spotlight on them, Degrassi opened a dialogue, and exposed young viewers like me to things I may never have understood otherwise.

Here are seven times Degrassi "went there" when few teen shows dared to be so progressive.

Paige's storyline is easily one of the most intense and upsetting things that Degrassi has ever done, and it's also one of the most important. In the episode "Shout," Paige attends a party with an older guy named Dean whom she has a crush on, but when he asks her to go upstairs with him, things go terribly wrong. Dean rapes Paige, and the rest of the two-part episode follows her as she comes to terms with the assault and grapples with the decision to report the crime.

Many shows for teenagers have a very specific idea about what child abuse looks like, but Degrassi's narrative was unique, because Craig's father was a seemingly stable, wealthy, respected doctor. However, he proved to fluctuate from extreme generosity and kindness to cruelty at the drop of a hat. This Degrassi storyline broke the mold on abuse, proving that it can happen to any family, regardless of wealth, status, or outward appearances.

There is nothing new about teen shows depicting eating disorders, but Degrassi was one of the few series that depicted a male student's struggle. When Toby needs to make a weight class for the wrestling team, he goes to extremes to make himself hit his target — despite the enormous risks. It's rare that male body image is discussed at all, and the episode proved that this kind of pressure does not solely effect young women.

It feels like every teen show on the planet features a character with an unplanned pregnancy, but rarely does that character choose to have an abortion. When 14-year-old Manny learns she is pregnant, she weighs her options, and eventually decides that she cannot carry a baby to term and chooses to have an abortion. The two-part episode "Accidents Will Happen" was so controversial that it did not air in the United States until years later.

Craig has always had a wild streak, but in the episode "Voices Carry" his behavior begins to escalate from rebellious to erratic. After attacking his stepfather, Craig is put in the hospital, where a psychiatrist diagnoses him with bipolar disorder. It is noted that Craig's behavior mirrors that of his abusive father, who may have also suffered from bipolar disorder. Mental illness was not a common subject for teen TV shows to tackle at the time, and this episode definitely set the stage for future series — like The CW's 90210 reboot — to do so.

Degrassi was tackling transgender issues long before the mainstream media discussed them. The 2010 episode "My Body Is A Cage" showed Adam, a transgender boy, coping with both bullying from classmates and his own family's struggle to accept him for who he is. After his mother encourages him to present as "Gracie" for his grandmother, Adam turns his frustration and depression on himself in the form of self-harm. The episode just showed a small piece of what many trans kids go through on a daily basis, and was an extremely powerful hour of television.

Teen shows often depict women "experimenting" with other women (remember when Marissa dated Alex for, like, four seconds on The O.C.?), but rarely are teenage guys depicted as bisexual or even fluid in their sexuality. More often than not, if a guy hooks up with another guy on a teen show, he comes out later as gay — not the case with Miles, who finds himself attracted to his friend Tristan, in addition to women. When the relationship goes public at school, few people even raise an eyebrow — a far cry from the days when Marco feared coming out as gay in earlier seasons of Degrassi.

We've had 14 seasons of progressive storylines on Degrassi, and I'm so glad Netflix has ensured that the series will live on to educate and inspire a whole new generation.