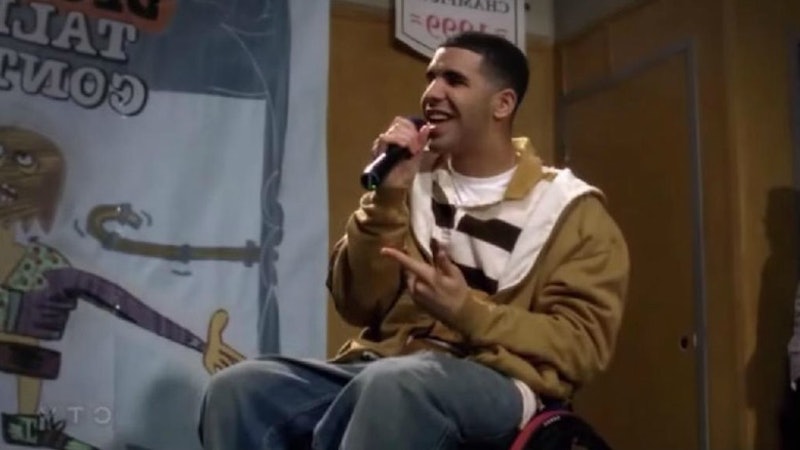 It's time to say goodbye to Degrassi — at least, on your television screen. TeenNick announced this summer that it had offficially cancelled Degrassi after 14 seasons, which means it's the end of a television era as we know it. Degrassi fans freaked out about this, but luckily, there was a light at the end of the tunnel: Netflix has picked up Degrassi: Next Class and will air 20 episodes in early 2016. Breathe easy, fans, because more Degrassi is coming your way — as are plenty of realistic Degrassi quotes about high school.

I'm not shy about admitting my undying love for this Canadian soap (anyone with access to my Twitter account can see my documented freak-out when I thought it had been cancelled for real) and one of the reasons why I love it so much is because it really is one of the most honest shows on the air about high school. Sure, there's plenty of drama, but Degrassi also delivers some frank truths about high school. Sometimes it's amazing. Sometimes it's not.

Here are some of Degrassi's most real quotes about high school and growing up that proved to fans that whatever it takes, they can make it through.

Who knew Jimmy was so deep? Here was the knowledge he dropped after the death of beloved classmate J.T.:

Thing is, life is random. And sometimes it’s tragic and totally messed up. But there’s one thing that makes all the drama and tears worthwhile - if you’re lucky enough to find someone you love, who loves you back, it’s a gift. Know what I’m saying?

I heard that guy grew up to be a rapper.

Adam is making an important statement here about people bullying him because he is transgender, and this quote could apply to so many high schoolers who have to confront harassment because of any aspect of their identity.

3. Zig Opens Up His Heart

Who knew niners could be so wise? After fighting with his then-girlfriend Tori, Zig finally admits why he's been kind of a jerk:

Being with someone that you really like is scary. They get to know you and all your qualities, good and bad. I guess I was scared that if you would really get to know me, then you wouldn't like me anymore.

It's a great, honest speech — it's really too bad that this couple was doomed from the start.

This letter is so sad, because Fiona is writing about Holly J, her best friend who can't reciprocate her romantic feelings. There's nothing more high school than pining for someone you can't be with.

It’d be easier if I didn’t feel this way, because there are a million reasons why we shouldn’t work. But even though I know that, I really, really hope that we will.

I like to imagine that Fiona has a beautiful Italian girlfriend to stroll through the piazzas with today, because she totally made me believe in the power of love, even when it was unrequited.

5. Bianca Reminds Us Of The Importance Of Friends

Because everyone knows that it's your friends that get you through tough times, whether it's bombing that calc exam or being stood up for homecoming.

6. Anya Feels Out Of Control

Umm, is there a truer statement about how it feels to be in high school? From parents to counselors to friends, everyone thinks they know how to run your life better than you.

That type of self-doubt is all too common.

Peer pressure is a very real thing in high school — few people choose to stand out from the crowd.

10. Imogen Stands Up To The Guy Who Broke Her Heart

High school boys, am I right? Props to Imogen for calling Eli out for his jerky behavior.

Because yes, there's heartbreak, and pain, and sometimes mistakes that you cannot believe you made. At the end of the day, you're in high school to learn — and not just from a book. You get to know yourself in high school one mistake at a time, and Degrassi shows that is totally OK.