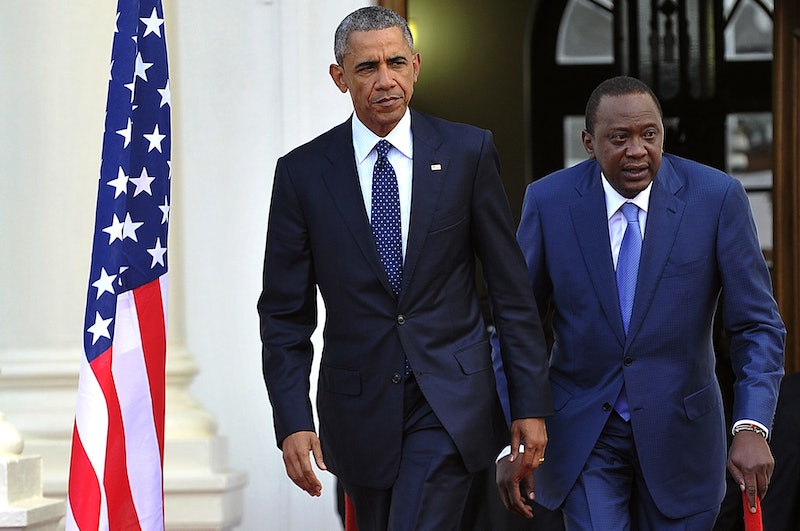 With President Obama now nearing the end of his second term, and his legacy becoming more and more concrete, there's one thing that's very clear about how we'll remember him — as the strongest advocate for LGBT rights in presidential history. Which is precisely why what he did Saturday, in his joint press conference with Kenyan President Uhuru Kenyatta, was so important: President Obama defended gay rights in Kenya, a country where homosexuality is illegal.

Simply put, no American president has been as staunchly supportive of LGBT rights as Obama has. From his fulfilled promise to end "don't ask, don't tell" in the U.S. military, to being the first president to publicly affirm same-sex marriage, to his backing of a ban on so-called gay conversion therapy — there might be things you think he could do better on, but his record relative to past presidents is undeniable.

But sometimes, when it comes time to speak alongside foreign heads of state, things get a bit awkward. Obama has an obvious interest in Kenya — it's his ancestral homeland, and according to the AP, he mentioned that he'd "be back" someday — but Kenya's got an obvious problem with gay people. And, despite knowing what a point of contention it was between himself and Kenyatta, he forced the issue.

Speaking to the assembled press, Obama didn't hold back his assessment of Kenya's oppressive criminalization of homosexuality. Here's what he said.

With respect to the rights of gays and lesbians, I've been consistent all across Africa on this. I believe in the principle of treating people equally under the law. And that they are deserving of equal protection under the law, and that the state should not discriminate against people on the basis of their sexual orientation.

... I'm unequivocal on this. If somebody is a law-abiding citizen who is going about their business, and working a job, and obeying the traffic signs, and doing all the other things that good citizens are supposed to do, and not harming anybody, the idea that they're going to be treated differently or be abused because of who they love is wrong.

Sadly, the concept of freedom beginning to erode is a good deal rosier than what gay and lesbian Kenyans face right now. Homosexuality in Kenya is punishable in by up to 14 years in prison. It's an absolutely egregious injustice, and it's the sort of thing that any American president should be unwilling to overlook, however awkward it might make things.

It didn't go over well with Kenyatta, however, who answered the criticism by effectively blaming the Kenyan public, and saying that gay rights were a "non-issue."

There are some things that we must admit we don't share, our cultures, our societies don't accept. It's very difficult for us to be able to impose on people that which they themselves do not accept. This is why I repeatedly say that for Kenyans today, the issue of gay rights is really a non-issue.

Kenyatta went on to say that the issue was simply not on the minds of Kenyans, which is self-evidently untrue — even if a majority of Kenyans were outright hostile to gay rights, Kenyatta's gay and lesbian citizens are every bit as Kenyan as he is.

It was a moment of tension that really stood out, considering how well-received Obama's visit was more broadly, but that's exactly why it was so important. If countries aren't made to answer for these kinds of policies in the international spotlight, there's no incentive to change. And that international spotlight more or less follows Obama wherever he goes.