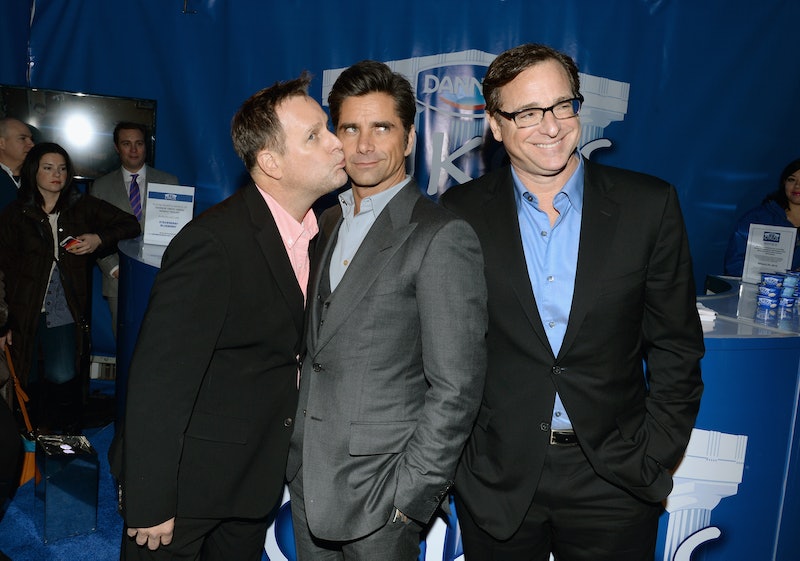 If you grew up in the '90s, it's safe to assume that you're familiar with Full House — and that you're probably very familiar with Fuller House, the upcoming Netflix spinoff show featuring many of the original cast members, albeit set decades after the ABC sitcom's last episode aired. Fuller House has gotten tons of attention since it first was announced, and sneak peeks from actors like John Stamos and Andrea Barber about the plots and sets have only made fans even more excited. On Jul. 25, the Tanner reunion got even better, when new Fuller House photos from the set were revealed.

Although none of the photos were officially released by Netflix and don't even share much about what to expect from the show once it airs, they're just as tantalizing as any "real" pictures. Posted by cast members such as Stamos (Jesse), Barber (Kimmy) and Candace Cameron Bure (D.J.), the new photos add to older ones already shared by Dave Coulier (Joey), Bob Saget (Danny), Jodie Sweetin (Steph), Lori Loughlin (Becky) and Scott Weinger (Steve). They may not reveal much (seriously, would it have been too much to ask that a cast member slip in a photo of D.J.'s three kids or a still-living Comet?), but if you're one of the many people freaking out over the idea of a Full House revival, then they'll more than do the trick of raising your expectations for the upcoming show.

It doesn't matter the decade — that haircut is always in style. Have mercy.

Then there's the one shared by Candace Cameron Bure, apparently taken right before the series' first taping in front of a live audience (those laugh track memories are hitting hard):

Earlier in the week, she'd also shared this photo from the cast's first script read-through:

Two months ago, Jodie Sweetin had shared this cute pic of her reunion with Barber:

And finally, there's this photo, posted by Weinger two months back that D.J.-Steve fans will love:

Could this cast be any cuter?! These photos are the perfect first peeks at Fuller House — even if they don't show Comet's return or reveal what happened to Michelle. How rude.