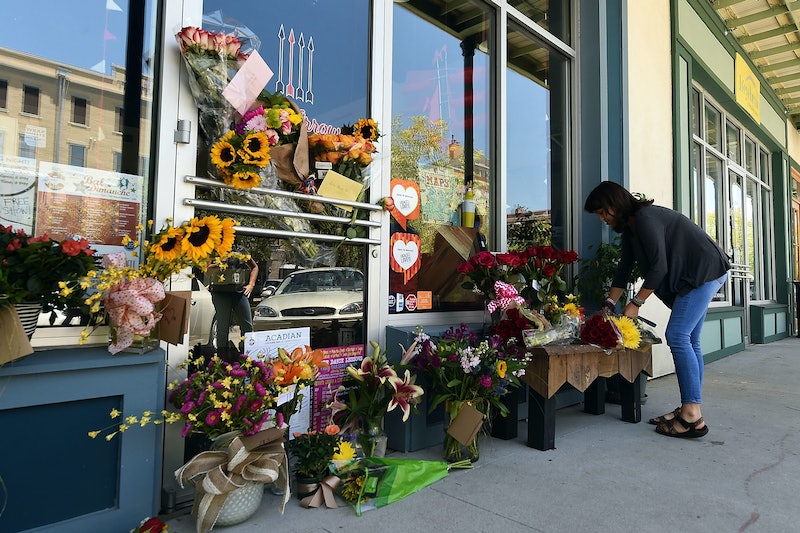 On Thursday night, John Russell Houser opened fire on a screening of Trainwreck in Lafayette, Louisiana, according to The Washington Post. He shot and killed two women and injured eight other people before shooting himself, and police have said his motive is still unclear. But a new report by the Post found that Houser had bragged about appearing on a number of local TV talk shows. The hosts of the shows told the Post that Houser exaggerated his role, and that he was a guest who was known for being angry about high taxes and "the growing power of women." Unfortunately, Houser isn't the only mass shooter who voiced such opinions against women's rights. Historically, many shooters have had a history of domestic violence or have spoken publicly about disliking women or the women's rights movement, and then later acted out with violence. This sad truth is exactly why the movement for equality is so devastatingly important.

Calvin Floyd, the former host of the talk show Rise and Shine on WLTZ NBC 38 in Columbus, Georgia, told the Post that he brought Houser on the air "strictly because he was entertaining," and not because he actually wanted to give fuel to Houser's "radical" beliefs. Unfortunately, Houser seemed to believe that the show did give his views more legitimacy. He claimed that he "guest hosted" Floyd's show more than 60 times and "invited political controversy on every one of them, and loved every minute of it," according to his LinkedIn page. But Floyd only saw the news value of Houser comments, which would generate tons of calls from viewers:

Whatever he wanted to talk about, it would generate calls. He was anti-abortion. The best I can recall, Rusty had an issue with feminine rights. He was opposed to women having a say in anything. You could talk with him a few minutes, and you would know he had a high IQ but there was a lot missing with him.

Houser's negative comments about women and the women's rights movement pale in comparison to the mindsets of some other violent criminals (like Isla Vista shooter Elliot Rodgers), but the misogyny is still there, and — in searching for a motive — it's in our culture. Misogyny, violence against women, and gun violence aren't being taken into account when we're evaluating the motives behind Houser's crime. Instead, we're blaming his alleged mental illness.

Jessica Valenti, a columnist for The Guardian, pointed out this false attribution to mental illness in a May 2014 column about Elliot Rodgers, a 22-year-old who killed six women — three whom he stabbed and three he shot — and and injured seven others in Isla Vista, California. Before the attacks began, Rodgers made several YouTube videos where he complained "that he was a virgin and that beautiful women wouldn't pay attention to him," according to Valenti's column. In one video, he said he "would slaughter every single spoiled, stuck-up, blond slut I see." And, in his final video, he seemed to allude to the idea that he was denied something every college-aged man deserves, according to The Guardian:

College is the time when everyone experiences those things such as sex and fun and pleasure, but in those years I've had to rot in loneliness, it's not fair ... I don't know why you girls aren't attracted to me but I will punish you all for it.

Valenti claimed that Rodgers had a sense of entitlement to sex that many young men are conditioned to believe is normal. And prominent domestic abuse cases in sports and our culture surrounding sexual assault tell men that they can forcibly punish women or take things from them if they don't get what they want. Valenti pointed out that just one month before Rodgers started attacking people, a high school student in Connecticut stabbed his classmate to death for rejecting his prom invitation.

In December, Man Haron Monis held 17 people hostage for more than 12 hours in a coffee shop in the "Sydney Siege," according to Slate. Slate's Nancy Leong pointed out that social media and news attention focused on the fact Monis had potential ties to Islam and religious extremism, but glossed over the fact that he was out on bail for charges relating to the murder of his ex-wife, whom he allegedly threatened and stalked, according to Slate. Monis had also been charged with more than 40 sexual assault offenses dating back to 2000 and allegedly involving seven different women.

But, Leong said, the way that we treat domestic violence makes it a lesser class than actual violence, which seems to only include mass shootings, stabbings, etc. and is carried out against random, innocent people (a description that some people think domestic violence victims don't seem to fit). For some reason, people don't often see domestic violence or aggression against women as the potential for more violence against people, generally. Rather, they seem to see it as some kind of small, he-said-she-said dispute instead of an instance of violence against a person.

I could go on and on with examples of news-worthy violent offenders and their history of misogyny or violence against women. As Valenti pointed out clearly in her column, "misogyny kills," or, at the very least, has historically led to violence.

When we immediately blame mental illness in cases of mass violence committed by white, male shooters, we're perpetuating racism; we're hurting the mentally ill, who are more likely to be the victims of crime than perpetrators of it; and we are being ignorant. The real "illness" is this misguided mindset that other people — in this case, maybe, women — were doing something wrong that needed to be corrected, and therefore Houser had the power to correct it. Mentally ill people don't actually kill people very often. More often, people who are misogynistic, homophobic, or racist kill people, and that's an illness we need to recognize as something we create and control.