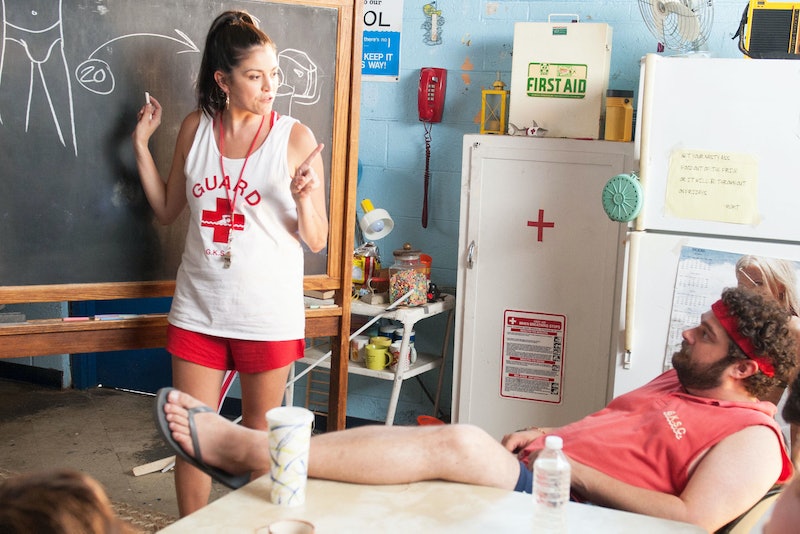 Saturday Night Live's Bobby Moynihan and Cecily Strong have proven time and again that they can do zany, over-the-top characters, and do them well. But what about the more subtle brands of humor? Staten Island Summer , written by Colin Jost, the duo's SNL co-star, enables both Moynihan and Strong to deliver characters that stand out for their more acute, under-the-radar comedy — not to say their trademark big personalities are absent.

In the film, out now, Strong plays the militant and sarcastic Mary Ellen, who has no time for shmoozing or stupidity of any kind from her Staten Island peers. Unless, of course, it's the kind of stupidity that can benefit her (a girl after my own heart, really). But would Mary Ellen's cleverness and resolve be a match against Strong's infamous SNL character, "The Girl You Wish You Hadn't Started A Conversation With At A Party?" Well, the actress seems to think so.

Says Strong, "Times a million... I think she's someone you never really win [against], though. Because she wouldn't admit it. And she'd still think she's right."

Moynihan, meanwhile, plays Skootch, a lifeguard that is jokingly (or perhaps, not) said to work at the Great Kills Swim Club, which serves as the setting for most of the film. It's clear that Skootch has also been working there far past his lifeguard-age prime; among pristine teens and well-groomed young adults, Moynihan's character gives half-hearted exercise classes to swim club members in a bleach-stained, seemingly years-old t-shirt. He smokes on the job (cigarettes and weed), and in a heart-stopping yet hilarious scene, he is forced to hold his breath full of marijuana smoke as he's nearly caught by his self-important, power-hungry boss. But, that doesn't deter him from making similarly bad choices in the aftermath. Basically, Skootch is big kid, who is either too afraid or misguided to live up to his true potential.

Moynihan reveals that he drew on people he knew to portray this irresponsible man-child.

"It's kind of me and one of my best friends... and this other guy I used to work with," he says.

Moynihan also reveals that he was also a lifeguard for "many years," and insisted that we "all know" a guy like Skootch. The familiar makes his portrayal that much more satisfying — you feel like you really know Skootch, and you root for him, too, despite the many illegal and dangerous activities he both participates in and facilitates. In real life, being an overwhelming SNL success, Moynihan has clearly left his detrimental Skootch-ness in the past, but still is able to channel that playful demeanor when needed.

At the premiere, the actor also spoke about the major differences between filming Staten Island Summer and Saturday Night Live, primarily the amount of time needed for the shoots. In a huge contrast to the jam-packed weeklong schedule for SNL, Staten Island was filmed over the course of two summers.

"[On SNL] we'll improvise for 10 minutes and they're like, 'Enough, this thing's gotta be on air in 10 hours,'" Moynihan says. But with Summer, as with any feature-length film, "To have the time to go back and do it again was key."

Check out the trailer for Staten Island Summer below. The film is available now on Digital and will debut on Netflix on July 30.